'When the government says the army will make a bridge, what does it mean?'
'If this is not stopped here, then there is no telling where and for what all the army will be employed or deployed in the future,' says Veenu Sandhu 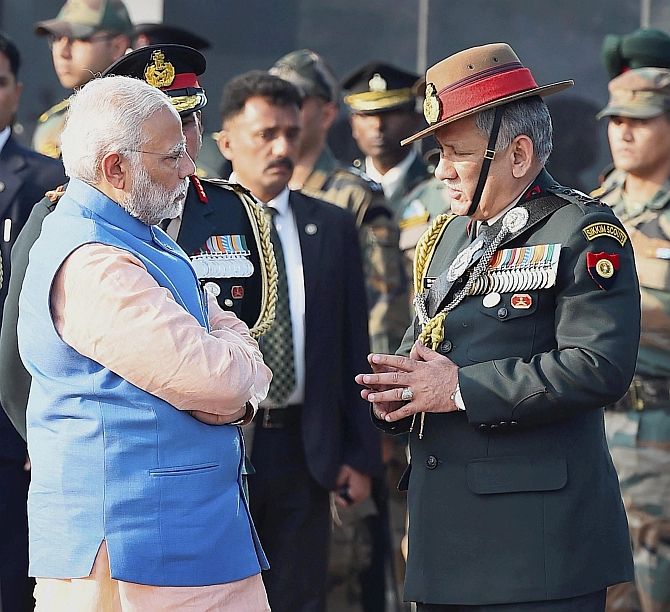 On October 30, during a surprise visit to the Elphinstone Road railway station in Mumbai where over 20 people were killed in a stampede on Septem,ber 29, Defence Minister Nirmala Sitharaman sprang another surprise.

The Indian Army -- no less -- would build the foot overbridge here and at two other suburban train stations in Mumbai, she declared.

The three bridges would be ready by January 2018, joined in Maharashtra Chief Minister Devendra Fadnavis.

'We are thankful to the army for help,' gushed Railway Minister Piyush Goyal.

Forget the Opposition, whose job it is to slam the government at every opportunity, even defence personnel, serving and retired, are appalled by this poorly thought out decision.

The announcement is a glaring example of how misinformed the ministers, including, unfortunately, the defence minister, are about the role of the army.

Building civilian bridges in a thriving city that has all possible resources and expertise at its disposal is not the army's job.

The army is meant to be the last responder, to be turned to when everything else has failed, when every other alternative has been tried and exhausted.

There are three core situations in which the army comes into play:

One, when there is an emergency on the national border.

Two, in case of natural or man-made calamities or disasters.

Three, when national image is at stake.

None of these three apply here.

Instead, the government, both in the state and at the Centre, has in one stroke put to question the competence of the railway engineers, who have called the decision 'demoralising', and forced the army to do a job it is not meant to do.

But then, this is not the first time this government is misemploying the army.

It did so early last year as well, for Sri Sri Ravi Shankar's cultural extravaganza on the banks of the Yamuna in Delhi.

The defence ministry, then under Manohar Parrikar, had directed the Indian Army to build floating bridges on the Yamuna floodplains.

Defence analyst Danvir Singh, former commanding officer of 9 Sikh LI and author of Kashmir's Death Trap: Tales of Perfidy and Valour, whom I spoke with about the issue, pointed to another time when the army was called to build a civilian bridge.

That was during the 2010 Commonwealth Games when a footbridge built for the Games near the Jawaharlal Nehru Stadium in Delhi had collapsed.

It was a race against time; the Games were round the corner, Singh said.

Under normal process, the bridge could not have been completed in time. So national image was at stake. That's when the army stepped in.

The situation was different and cannot be cited as an example to defend the Mumbai decision, as is being done. (The question that can be asked, though, is why a shoddy job was done in the first place.)

When the government says the army will make a bridge, what does it mean?

Does it mean that the army will be using its own equipment?

In that case, this will also affect the general services equipment reserve that the army holds and uses for operational tasks and duties.

Then there is the question of the morale of the soldier who is being expected to do a labourer's job in a place where he does not need to.

This conflicting image of a soldier in fatigues employed thus does not fit. It will impact the general understanding and appreciation of a soldier's role in the country.

If this is not stopped here, then there is no telling where and for what all the army will be employed or deployed in the future.

As a child, I would often hear my father, an infantryman, say, "Fauj hai, mauj nahin (It's the army, not a party)." This was never a complaint; it was said with evident pride.

Soldiers don't mind getting their hands dirty, or their faces soiled. They are used to roughing it out.

What they are not used to is being misused. And this, plain and simple, is an example of that.