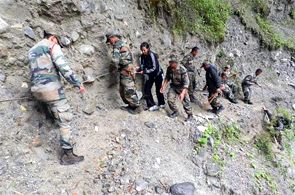 To avert another Uttarakhand-type catastrophe, we must change course. We should stop pandering to the Indian elite's insatiable appetite for electricity, which is driving reckless dam construction, says Praful Bidwai

It will take years to roll back the physical, psychological, social, economic and ecological damage wrought by the terrible floods in Uttarakhand, which killed more than 1,000 people. The deeper causes of this epic tragedy were not natural, but manmade. They ensured that cloudbursts and heavy rainfall, which routinely occur in Uttarakhand's upper hills, turned into a catastrophe.

The causes include official policies and governance failures: aggressive promotion and runaway growth of tourism; unchecked, unplanned development of roads, hotels, shops, mines and multi-storeyed housing in ecologically fragile areas; and above all, the planned development of scores of environmentally destructive hydroelectricity dams.

This was an invitation to calamity. My past experience as a member of the ministry of environment and forests' expert appraisal committee on river valley projects confirms the contribution of dams, which is further discussed below.

True, Uttarakhand's worst-affected areas experienced heavy rainfall of 340-370 millimetres within 24 hours on June 16-17, leading to flash floods. But this was far from unprecedented. Uttarakhand has recently recorded single-day rainfall in excess of 400 mm several times, including 450 mm in 1995, and 900 mm in 1965. Cloudbursts, floods and rapid swelling of rivers too aren’t uncommon.

This time, however, the floodwaters, laden with lakhs of tonnes of silt, boulders and debris from dam construction, found no other outlet than hundreds of villages and towns. Some buildings were covered under several feet of mud.

Aggravating this were two huge downpours of water and rocks from the high mountains, in all probability caused by glacier lake outburst floods (GLOFs), which deluged Kedarnath. GLOFs, or the explosive bursting of glacier lakes, are a consequence of human-induced climate change, which is causing rapid glacier melting in the Himalayas.

An early warning system, effective evacuation plans, and a responsive disaster management system would have prevented a massive loss of precious life. But they weren't in place -- another governance failure. Relatively inexpensive radar-based cloudburst forecasting technology would have given a three-hour warning. But it wasn't installed because of inter-agency squabbles. The meteorological department has no reliable record of rainfall at specific locations from June 15 onwards. In fact, according to media reports, Kedarnath didn't even have a rain gauge!

No evacuation plan was drawn up for Uttarakhand's vulnerable districts despite their recent history of disasters, including earthquakes and floods. As the Comptroller and Auditor General pointed out this past April, the Uttarakhand Disaster Management Authority, formed in October 2007, has never met or formulated "rules, regulations, polices or guidelines".

Clearly, no lessons have been learnt either from the great earthquakes of Uttarkashi (1991) and Chamoli (1998), or recent major flash foods and other monsoon-related disasters in Uttarkashi and Rudraprayag districts, each involving death and destruction.

The state government has zealously promoted tourism to a point when tourist arrivals reached 25 million, almost two-and-a-half times Uttarakhand's entire population of 10.8 million, devastating the ecology and devouring tens of thousands of acres of forest land. Hotels, houses, shops and restaurants were recklessly built upon caving roadsides, steep slopes, and worst of all, on the flood plains of rivers. Encroachment of these "natural boundaries" of rivers is fraught with grave danger. Yet, important government buildings, including a university, a radio station, a jail and the headquarters of the Sashatra Seema Bal, were built on flood plains.

However, the worst culprits are the large numbers of hydroelectric dams, which have spread like a rash in the basins of the Alakananda, Mandakini and Bhagirathi, and their tributaries. Already, says the Hindustan Times, 70 dams have been built, including 23 mega-projects generating 100 MW or more. According to the NGO People's Science Institute, another 680 dams are in various stages of commissioning, construction or planning.

Such projects involve drilling huge tunnels in the hills by blasting rocks, placing enormous turbines in the tunnels, cutting down forests to build water channels, roads, townships and other infrastructure, and laying transmission lines by other destructive methods. Many dams are built on the same river so close to one another that they leave no scope for the river's regeneration.

Hydroelectric dams steal water from people. They cause enormous destruction throughout their lifecycle, from intrusive construction, mining of building materials from riverbeds, muck disposal, debris dumping, and altering the hydrological cycle and changing the natural course of rivers. Thus Uttarakhand's 70 completed dams have led to interference with 640 kilometres of river water flows, equivalent to half the length of the state's major rivers.

Hydroelectric dams have a profoundly negative impact on geology, especially in a Himalayan hill state like Uttarakhand. To appreciate this, it's important to note that geologically, Uttarakhand is extremely fragile, being part of the world's youngest mountain range. Much of the state lies in the seismically "most active" Zones IV and V, with high tectonic activity that can suddenly alter the contours of land and the course of rivers. This greatly increases Uttarakhand's disaster potential.

The state is prone to high-intensity rainfall events, including cloudbursts, flash floods and landslides. As South Asia Network on Dams, Rivers and People puts it, it has a very large number of rapidly flowing silt-laden rivers that can turn into a ravaging, eroding, force of destruction if not handled carefully. Uttarakhand has a high proportion of its area under forests, which are necessary for the sustained existence of the local environment, people and biodiversity. People's livelihoods and water security depend on these natural resources.

Climate change will aggravate matters. It will increase the frequency of extreme weather events, including high rainfall. A study by the National Atmospheric Research Laboratory, Tirupati, shows a 14.5 percent rise per decade in the frequency of very heavy rain-events in India over 1951-2004.

Another study, just released by the prestigious Potsdam Institute for Climate Impact Research, says that with one degree Celsius global warming, daily variability in monsoon rainfall over India will increase by 4 to 12 percent and by as much as 13 to 50 percent if global greenhouse gas emissions continue to rise unabated. With global warming on course to four degrees, the effects will be ruinous.

The impact on Uttarakhand will be even greater because the Himalayas are warming at least twice as fast as the globe. Rapidly melting Himalayan glaciers will release large quantities of water into the Gangetic river system.

Yet, dam construction has taken place without factoring in these grave environmental hazards. In 2009, the CAG's audit of hydel projects in Uttarakhand concluded: 'No specific measures had been planned/designed … to cope with the risk of flash floods. The adverse consequences of such ?oods are acute as they cannot only damage the project structures but can cause loss of lives in low-lying downstream areas…'

The audit adds: 'Given the current policy of the state government of pursuing hydro-power projects indiscriminately, the potential cumulative effect of multiple run-of-river power projects can turn out to be environmentally damaging.'

A Wildlife Institute of India report (2012) recommended that 24 of the 70 Upper Ganga projects should be shelved because of their high ecological impact. They together affect nearly 10,000 hectares of land in this small state, and submerge more than 3,600 hectares of forests.

All these reports were ignored. It's not just the Uttarakhand government, but the Centre, too, that's to blame for this. The MoEF has reduced the environmental impact assessment and appraisal processes to a farce. It routinely rejects the recommendations of the statutory Forest Advisory Committee. It recently changed its composition to destroy its integrity.

In the 1990s, when I was on the MoEF expert appraisal committee on river valley projects, not one of the dozens of projects submitted to us had adequate documentation of impact on forests, wildlife, hydrology or rehabilitation of displaced people. All of them had to be rejected. But the present EAC has approved all of the 262 projects placed before it between April 2007 and December 2012, without a half-way credible evaluation of their impact.

The compromised nature of this EAC is revealed by the fact that its chairman P Abraham had to resign in ignominy in 2010 because of a flagrant conflict of interest between his official role and his membership as a director of several hydropower companies being examined by the committee.

Faced with criticism of Upper Ganga projects by environmentalists and affected people, the MoEF recently appointed an Inter-ministerial Group, headed by BK Chaturvedi. This has produced a wishy-washy report, which fails to analyse, even mention, the destructive potential of the projects and the region's vulnerability to climate change.

The report does not mandate cumulative impact assessment for all multiple-dam projects, as distinct from the discrete impact of individual dams. It fails to uphold the basic principle that all rivers must be allowed to regenerate themselves by having a free-flowing length of five km between two dams.

To avert another Uttarakhand-type catastrophe, we must change course. We should stop pandering to the Indian elite's insatiable appetite for electricity, which is driving reckless dam construction. All dams should be stringently reviewed for environmental soundness. Until then, there must a moratorium on further construction.