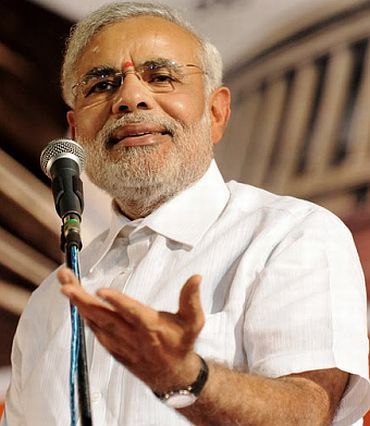 Even after Prime Minister Narendra Modi expanded his council of ministers last Sunday, its total strength has remained much lower than the one his predecessor Manmohan Singh had. Compared to Dr Singh's 79 ministers, the Modi government now has 66 members in his council of ministers. Yet most political analysts have criticised the prime minister for not having delivered on his earlier promise of a leaner government.

One reason for the disenchantment could be the manner in which Modi planned the expansion in his council of ministers. On May 26, when the Modi government was sworn in, there were only 46 ministers including the prime minister. The size of the ministry was reduced to 45 a few days later when Gopinath Munde met with an accident and died. This was really a small size of the ministry, but Modi did not get any credit for it as everybody knew that there would soon be an expansion to accommodate more ministerial aspirants.

Remember that there was no major ministerial restructuring to reduce the size of the council of ministers. And without such reorganisation, it was only a matter of time when more ministers would have to be sworn in. This is exactly what happened on November 9 with Modi's council of ministers expanding by 21 new members.

There is, however, a different kind of restructuring of the council of ministers that Modi has succeeded in effecting through the latest round of expansion. The number of ministers of state has seen a sharp decline -- from 38 in the Manmohan Singh government to 26 under Modi. This is a significant change and nobody should be shedding tears for the decline in this number. Most ministers of state are overshadowed by their senior ministers in the Cabinet and do not get to do much useful work.

In the allocation of business within a ministry, the Cabinet minister usually reserves for himself the more important subjects and only the insignificant ones are left for the junior ministers to handle. With fewer ministers of state in the Modi government, it is to be hoped that they would now get more substantive work from their senior colleagues in the ministry and would not be reduced to merely inaugurating seminars or meetings.

The size of the Cabinet, too, has shrunk -- from 34 in the Manmohan Singh government to 27 under Modi. But in sharp contrast, the number of ministers of state with independent charge has gone up -- to 13 now under the Modi government from just seven under Dr Singh.

For the prime minister, a Cabinet of 27 members is perhaps easier to deal with and is certainly less unwieldy. At another level, a larger number of ministries under the independent charge of a junior minister could mean that the prime minister would now be able to exercise greater influence over what needs to be done in those areas. This also allows the prime minister to evaluate the performance of such junior ministers and whether they have grown in the job over a period of time and can be promoted to a cabinet rank in the council of ministers.

More specifically, the expansion of the council of ministers last Sunday also reveals the priority areas for this government. The induction of Suresh Prabhu as a Cabinet minister for the railways is a clear indication that the prime minister wanted change to happen in the Indian Railways much faster than the last incumbent had managed to initiate. Similarly, the allocation of the defence ministry to Manohar Parrikar is to ensure that Finance Minister Arun Jaitley is not overburdened with defence issues and can remain focused on the next Budget and the economic policy priorities of the government. Quite apart from those shifts, there are at least three changes that are significant from the point of view of the Modi government's economic policy priorities.

One, the ministry for labour and employment has been separated from the ministry for steel and mines. It has now been entrusted with a new minister of state with independent charge. This is in sync with the prime minister's agenda for labour law reform and focus on job creation and the new minister will be expected to bring about change in both the areas in the coming weeks.

Two, D V Sadananda Gowda has been given the law and justice ministry, while Ravi Shankar Prasad is now left with only the ministry for communications and information technology. Both the ministries are critical areas crying for reform and the performance of both of them will clearly be under scrutiny. And finally, the ministry of rural development, panchayati raj, drinking water and sanitation could not have remained clubbed with the ministry for road transport, highways and shipping. That Modi has restored status quo ante with regard to these two key ministries is a welcome development for both the sectors of the economy.