Kejriwal has given not only Modi and Shah some food for thought, but also to jaded Opposition leaders who must now wonder whether taking on the BJP's majoritarianism by the horns, as they have been doing so far, is the appropriate strategy in such extraordinary times, notes M K Bhadrakumar. 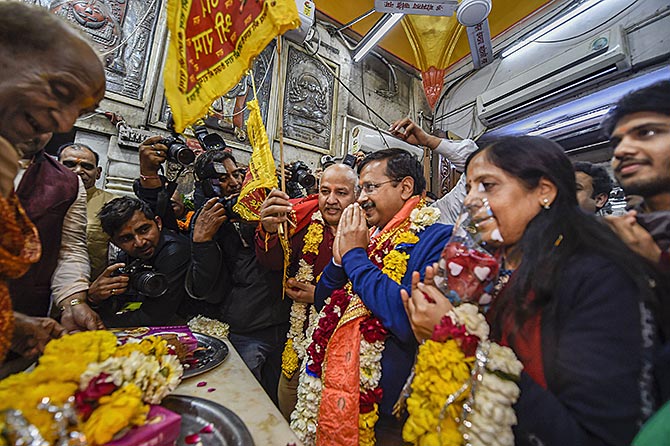 The meaning of the Delhi state election results will take time to sink in, although it seemingly turns out to be the chronicle of a tale foretold.

Indeed, scouring the opinion of 'Delhiites' -- I am not one amongst them anymore -- through conversations during the past one month, it was crystal clear as I boarded the morning flight for home in Kerala on Tuesday that Arvind Kejriwal and the Aam Aadmi Party was heading for a spectacular victory.

The only suspense was whether the BJP's tally would hit double digits in the 70-member state assembly.

In the event, it didn't. Kejriwal has been proven right.

However, what has happened is more complicated than a simple, straightforward tale of people placing their trust in a competent politician.

Such fairy tales are not the stuff of politics; the focus of Manik Sarkar on social development indicators was, after all, never in doubt two years ago in Tripura.

Clearly, Kejriwal's spectacular victory is more -- much more -- than a matter of endorsement of his track record as chief minister during the past 5-year period, which has been truly exceptional by Indian standards.

The heart of the matter is that Kejriwal has presented to the country an 'alt-politics', which makes the Delhi election result a highly significant signpost for the future.

Kejriwal presented a deft combination of style and substance, which people found appealing, including sections of the 'middle-class' electorate that is disproportionately present in the national capital, especially the trading community, which had voted for BJP in the 2019 general election.

How did Kejriwal pull it off?

Fundamentally, as we could have witnessed through the past month once the electoral battle was joined in Delhi, Kejriwal presented himself as the common man.

He drew attention to his responsive governance with a human face, while in power -- the social subsidy for water and electricity supply; the mohalla clinics that made available healthcare to the poor; the smart schools; the corruption-free administration that kept middle men and dalals at arm's length and so on.

It was unmistakeable that Kejriwal belonged to planet earth, while in comparison, Amit Anilchandra Shah contrived to look as if he had just landed from planet Mars attired in full battle gear.

Shah lost the battle when he sounded more and more like an extraterrestrial as the campaign wore on -- while on the other hand, Kejriwal refused to oblige him with a bruising battle and instead taunted him repeatedly with an invitation to deliberate and discuss.

The battle was conclusively lost when Shah's field commanders wantonly branded Kejriwal as 'anti-national' and 'terrorist', which was so patently absurd that all that the the latter's campaign workers had to do was to simply turn up at homesteads, knock on the door and pose the disarming query: 'Do you see Kejriwal as your son or as a terrorist?'

Simply put, Kejriwal had an option to plunge into battle with gusto with lances and spears but preferred to ignore the silly barbs aimed at him by Shah & Co.

The core of his alt-politics was to defeat the strategy of the BJP, which the Modi-Shah duo had perfected in the smithies of electoral politics since 2014, by making it look abrasive and divisive -- even superfluous -- in the prevailing Indian conditions.

To be sure, Kejriwal has given not only Modi and Shah some food for thought, but also to India's jaded Opposition leaders who must now wonder whether taking on the BJP's majoritarianism by the horns, as they have been doing so far, is the appropriate strategy in such extraordinary times.

Kejriwal had no qualms about presenting himself as a practising Hindu.

He neither wasted breath over the raging skirmishes over the CAA/NPR/NCR nor showed interest in turning the Delhi election into a futile, unproductive 'secular versus communal' fight.

Of course, it is well-known that Kejriwal never once visited the Shaheen Bagh protests, the iconic event of resistance to the BJP's divisive and polarising campaign directed against the Muslim voters. Nonetheless, ironically, the controversial AAP candidate Amanulla Khan thrashed the BJP nominee in the Okhla constituency.

All in all, therefore, the election results showed that Kejriwal tapped into the right-of-centre shift in the locus of Indian politics, while fundamentally speaking, hoisting his flag with a left-leaning compass and offering a road map of sensitive governance to navigate the vast open space of social democracy in a poor country such as ours.

One can sense that the ideology-laden traditional Left parties would have a problem in identifying with Kejriwal's 'alt-politics', while applauding his magnificent election victory.

On the other hand, the de-ideologised Congress party is caught in a state of abject bewilderment and fear like a deer in the headlights.

Yet, by sidestepping the agitational politics of majoritarianism and Shaheen Bagh protests alike, Kejriwal has reset the narrative and secured a massive mandate.

It is a pivotal achievement that any patriot and nationalist will celebrate, given its potential to expand beyond the capital region if only the Opposition leaders were to discard the quixotic notions of tilting at windmills and accept, howsoever grudgingly, that there could be more than one idea of India.

The stunning reality is that so long as politics is about winning elections, the majoritarianism that has been in a state of denial in independent India all through since Partition and began surging in the most recent decade can be neutralised effectively the Kejriwal way -- by making it look irrelevant and obsolete.