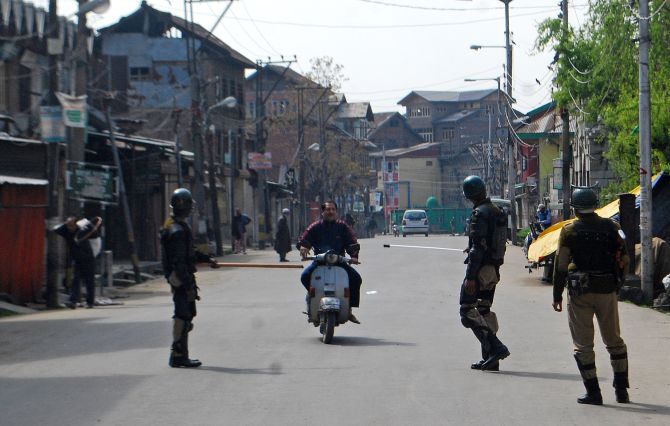 'Kashmir belongs to us all, even if we differ with each other.'
'Statesmanship demands that we sit together and let the left, right and centre of the political spectrum converge on the solution,' says former MP Tarun Vijay.

Say a provocative word and the situation in the Kashmir Valley may become worse.

This is the time when we must see the government work silently to calm down the situation and help build a national consensus.

Kashmir doesn't belong to a set of ideological people or organisations, it belongs to us all, even if we differ with each other.

Statesmanship demands that we sit together and let the left, right and centre of the political spectrum converge on the solution.

This is not the time to bring history before them or hold a stick in the hand to say, 'Hey, you were wrong always. You need to be taught a lesson.'

Please sit down, cool tempers and look at the long journey that the Narendra Modi government has to traverse -- short-term gains and hurried steps may mar the fabulous dream we are all working to realise.

The Burhan Wani issue was messed up by a jingoist media in New Delhi which saw a TRP/circulation opportunity in playing up the handsome, romanticised image of the deadly terrorist.

In fact, someone commented that perhaps a section of the Indian media has become the best recruiting adda for Islamic State. Kill a few innocents to get on the front pages of the newspapers and become the centre-point of prime time debates.

We need to relook at our Pakistan policy. Kashmir shouldn't be left to be burnt in a Pakistan-sponsored fire.

Pakistan Prime Minister Nawaz Sharif's statement proves Pakistan is bent on to seeing that the wonderful coalition of the Bharatiya Janata Party-People's Democratic Party doesn't continue or is successful.

There couldn't have been a better factor than the BJP joining a government in Jammu and Kashmir. Development and a new path of progress was in the air. People had voted overwhelmingly for democratic governance and life looked hopeful.

That something vicious was in the air and a Burhan Wani may appear to focus on the other side of the cauldron should have been realised and seriously dealt with.

Normalcy is abnormal in Kashmir -- who doesn't know this?

Slowly, the momentum was being built up -- Sainik Colony bogeys, television channels debating non-issues in Kashmir, the 'outsider' fear psychosis being raised and the role of Opposition leaders in the state to gain sympathy in the lost constituencies. It was all happening before our eyes.

While Chief Minister Mehbooba Mufti joined devotees at Kheer Bhawani and offered milk to the holy pond, the separatists were holding a conference to stop Kashmiri Hindus from returning to the Kashmir Valley. The smoke was in the sky, but the Indian media refused to recognise it.

The 'humanitarians' who are asking whether it pains us to see a 22-year-old school dropout being mourned must answer where were their tears when Hindus were driven out of their homes and their women were abused before their eyes?

Where were their humanitarian feelings when the savage jihadis opposed the return of Kashmiri Pandits to the Kashmir Valley?

What makes them justify the slogans of Nizame Mustafa and the renaming of Anantnag as Islamabad and Shankaracharya Hill as Takhte Suleman?

They preach secularism till it serves their Islamic purposes. They become Islamist maulanas when they see their secularism demands equal treatment for Hindus.

Indian curricula are not prescribed in Kashmiri schools. The Indian national anthem doesn't appear either at the end of the books -- which is commonly done in other states, or sung in the schools.

We have very methodically made the last three generations feel that they are not like Biharis or Punjabis, or Bengalis or Tamils, but they are different.

We defend the second flag for them, a separate constitution and a separate provision in our Constitution under Article 370 -- that nothing that Parliament passes would be automatically be applicable in Jammu and Kashmir till the J&K assembly accepts it.

Two years ago, I was part of a standing committee for the human resources development ministry. A group of MPs visited many Srinagar schools and took photographs in government schools where H for Hajj and E for Eid were being taught -- nothing wrong in that.

I raised the issue at a meeting with the principal secretary, education, J&K government, asking whether the sentiments of minorities like the Buddhists are taken care of and whether the national anthem was being sung in schools.

The answer was meek. "Sir, it's a good suggestion, we will certainly consider it."

Yet we have been expecting them to behave like us. Like we love to shout from the rooftops -- 'Kashmir is our integral part.'

Now is the time when we will have to act fast and do enough to make Kashmir an integral part of our life and land, in spirit which we failed to do in the last three decades.