J&K interlocutors: They came, they saw, they went

Now that the Jammu and Kashmir interlocutors have seen the problems of the people and submitted their report on a year-long exercise, it is time for the government of India to be serious over the intricate matters concerning Jammu and Kashmir, says Varad Varenya.

Last summer, Kashmir was fuming with protests, arson, shutdown and killings. Many people came on streets protesting against the government/state and demanding Azaadi (secession from India).

The protest was supposed to be for alleged human rights violation but it turned out to be protest for complete demilitarisation and independence of Jammu and Kashmir. Stone-pelting was on peak, curfews were defied and violence ruled the streets. It was Kashmir's Intifada.

Instead of following state government's rules and orders, protest calendars were followed. Protest calendars were prepared by instigators of violence, the separatists. People were venting the so called 'anger and dissent' on streets. Summer Unrest of 2010, as it is called, resulted in loss of more than 100 civilian lives and hundreds of security forces were critically injured. As per Indian intelligence agencies, protests and demonstrations were sponsored by Pakistani agencies. Moreover, there were attempts to 'redefine' relations between India and Jammu and Kashmir. The attempts continue even today.

The interlocutors travelled to all 22 districts of J&K state, interacted with nearly 700 delegations to hear different views and solutions to the J&K imbroglio. Also, there were three roundtable conferences of activists and scholars with the interlocutors. The interlocutors held several meets with almost all the stake-holders of state to listen to their problems. People apprised them of their social and political issues.

The nailing of Inter Services Intelligence agent Ghulam Nabi Fai in United States by the Federal Bureau of Investigation in July this year made an imprint on the integrity and credibility of the two interlocutors -- Padgaonkar and Kumar. Padgaonkar had attended one of the 'international conferences' on Kashmir organised by the Kashmir American Council headed by Fai. On the other hand, Kumar had attended one such type of seminar organised by the Kashmir Centre in Brussels headed by Abdul Majeed Tramboo. Both conferences were allegedly funded by the ISI.

The two interlocutors received flak from several sections for attending these anti-India seminars. Even their colleague Ansari criticised them for attending such seminars and went on to say that if he had been in the same position, he would have 'quit immediately'.

Padgaonkar in his clarification said that he didn't remember the year of the seminar but he "quite liked the idea of the meeting and didn't suspect any hanky-panky." Padgaonkar also said that he was unaware of Fai's connections. Kumar clarified that government was in loop during her seminar trip. Even the J&K interlocutors' panel was on brink of breakage when Kumar offered to resign though the resignation was not accepted by the government.

Anyhow the working relationship seemed to remain unaffected. On October 12, the three interlocutors submitted their report to Union Home Minister P Chidambaram, a year after appointment for drawing roadmap to peace in the state. In response to a RTI query, it was disclosed that the ministry of home affairs spent nearly Rs 70 lakh as remuneration and other expenses on the three interlocutors.

The atmosphere for resolving socio-political issues pertaining to the state of Jammu and Kashmir was created with the interlocutors exercise and that mood continues. People expect the exercise by interlocutors will yield some results. It's been more than two months since the submission of report but there hasn't been a word on it. After the submission of report, there is kind of lull on part of government regarding the issues of Jammu and Kashmir.

The valley is relatively peaceful this year. It is imperative that government should grab the opportunity of 'relative peace' and start the process of addressing the issues of the entire state keeping in view the opinions/aspirations of all the stake holders. The report hasn't been made public yet. The interlocutors' report should be brought into public domain so that the people of Jammu, Kashmir and Ladakh know what the interlocutors are recommending (and/or imposing) on them.

Now that the Jammu and Kashmir interlocutors came to the state, saw the problems of people and went by submitting their report on a year-long exercise, it is time for the government of India to be serious over the intricate matters concerning Jammu and Kashmir.

Varad Varenya is a Delhi-based writer and tweets @VaradVarenya 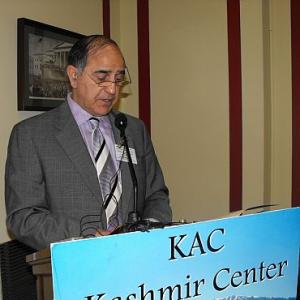 REVEALED: How 'ISI spy' Fai pushed anti-India agenda in US

Omar is trying to denotify Disturbed Areas in J&K: Chidambaram