Key to China's decision regarding Taiwan will be its leadership's assessment whether the US will come to Taiwan's defence, explains Jayadeva Ranade, the former senior RA&W officer and China expert. 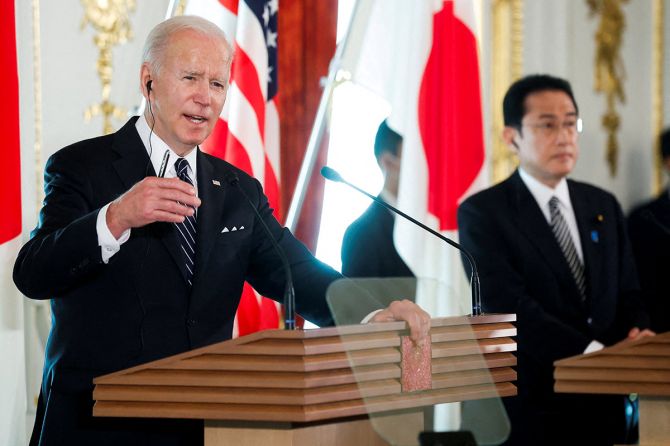 IMAGE: It was at his joint news conference with Japan's Prime Minister Kishida Fumio at the Akasaka palace in Tokyo on Monday, May 23, 2022, that United States President Joe Biden, in response to a reporter's question, declared that Washington is ready to get involved militarily to defend Taiwan in the event of a Chinese invasion. Photograph: Jonathan Ernst/Reuters

Tension in the South China Sea region centered on Taiwan has escalated in the backdrop of the war in Ukraine and amid speculation that Beijing might seize the opportunity to invade Taiwan.

In Tokyo -- just before the Quad Summit -- United States President Joe Biden on May 23 affirmed US commitment to defend Taiwan.

Clearly intended to show US interest in the region and deter Beijing from taking Taiwan by force, it predictably evoked a swift, toughly worded Chinese response.

The Chinese foreign ministry spokesman, at the routine press conference in Beijing the same day, insisted that Taiwan is 'purely an internal affair of China and does not allow any foreign interference. On issues involving China's core interests such as sovereignty and territorial integrity, China has no room for compromise or concession'.

He made the ritual declaration that no one should underestimate the 'strong determination, firm will and powerful ability of the Chinese people to defend national sovereignty and territorial integrity.'

He advised the US to choose its words carefully so that the situation in the Taiwan Strait and China-US relations are not damaged, adding 'China will take firm action to safeguard its sovereignty and security interests, and we will do what we say!' Earlier on May 21, an illegally recorded video of a 'War Preparedness Mobilisation' meeting, claimed to have been held in Guangdong province in early May, was 'leaked'.

While the video's authenticity is yet to be established, and it is unclear whether this is part of China's psywar or a genuine leak by a discontented People's Liberation Army officer, it will have elevated concern.

The video was accompanied by the claim that four PLA Generals were executed because of it.

Beijing has, as policy, kept tensions across the Taiwan Strait high in order to pressurise Taiwan and the ruling Democratic Progressive Party (DPP).

China continues to augment military facilities in the South China Sea islands, most of which are in its possession.

US navy warships similarly conduct 'Freedom of Navigation Operations' (FONOPS) in waters near China and pass through the Taiwan Strait.

These are often timed to coincide with official US announcements and visits to Taiwan by US Congressmen.

For example, the PLA navy is holding a major exercise in the South China Sea from May 19 to 23 coinciding with US President Biden's visits to Japan and South Korea. Earlier in mid-April, a Global Times social media post claimed the US sent a 'military signal' to China with US air force F-15C fighter jets carrying live ammunition flying on a seven-hour mission from the Kadena air force base in Japan and back.

The US action was unusual as US fighter jets carry live ammunition only when they conduct quick response alerts or actual combat missions.

The Chinese defence ministry responded that when defending national sovereignty and security, the PLA has always been brave and good at 'showing the sword'.

Later, on May 10 a PLA air force WZ-10 attack helicopter and two Ka-28 Helix anti-submarine warfare helicopters for the first time not only crossed Taiwan's Air Defense Identification Zone, but flew across the so-called 'median line', an unofficial boundary that runs down the middle of the Taiwan Strait.

Thereafter on May 13, Beijing sent 18 warplanes into Taiwan's Air Defense Identification Zone. This was the biggest sortie since January 23, when Beijing sent 39 planes. Japan too has expressed concern at China's aggressiveness.

Writing in the Straits Times (May 3), Ito Takatoshi, the former Japanese deputy vice minister of finance, endorsed then Japanese prime minister Abe Shinzo's suggestion that the US discard 'strategic ambiguity' and make it 'crystal clear' that it would defend Taiwan against any attempted Chinese invasion.

Failing that, he said, only the prospect of US economic sanctions might deter China from invading Taiwan.

Ito asserted that such deterrence is crucial to East Asia's stability and that it is necessary to dissuade China.

The US, Japan, South Korea and Taiwan must, Ito emphasised, now focus on where to draw their 'red lines' in East Asia, and effectively communicate these, loudly or quietly, to Russia, North Korea and China.

The price they will pay for violating these 'must be made visible'. Meanwhile the US, without discarding 'strategic ambiguity', made some moves towards assuring its allies.

On May 5, the US state department's bureau of East Asian and Pacific affairs posted a fact sheet on Taiwan-US relations on its official Web site which removed previous statements saying that Washington acknowledged Beijing's 'one China position and said 'Taiwan is a key US partner in the Indo-Pacific', but still acknowledged that the Taiwan-US relationship is unofficial.

Later, on May 10, White House Indo-Pacific policy coordinator Kurt Campbell sent a clearer warning to Beijing by disclosing there has been an 'unprecedented' level of dialogue recently between the US and European countries on Indo-Pacific issues, including the 'critical' importance of maintaining the status quo in the Taiwan Strait.

Campbell said they 'have a profound interest across the board in the maintenance of peace and stability across the Taiwan Strait.'

A major cause for tensions in the region is Chinese President Xi Jinping's ambition to go down in Chinese history as the leader who initiated the rejuvenation of the Chinese nation by reunifying Taiwan with the mainland.

While Xi and his generals are closely monitoring the war in Ukraine, they will have also noted that the US navy, French, British and German warships have marked a presence in these waters.

Key to China's decision regarding Taiwan will be its leadership's assessment whether the US will come to Taiwan's defence.