Admitting they had 'differences' over civilian nuclear cooperation, which India considers a key component for its energy security, the prime ministers of India and Japan on Tuesday decided to work around the problems to raise their bilateral strategic profile.

However, Japan will not be supplying nuclear reactors and other material for India's civilian nuclear sector any time soon, thereby limiting India's options to quickly develop its atomic power segment and generate the electricity it needs to fuel its developmental needs.

"We discussed civil nuclear cooperation. This would become a very important agenda in the future," Japan's Premier Yukio Hatoyama said, indicating that Tokyo has problems with New Delhi's refusal to sign either the Nuclear Non-Proliferation Treaty or the Comprehensive Test Ban Treaty.

Japan, the only country to have suffered a nuclear attack, has a strong, almost hawkish non-proliferation agenda, and has not reconciled with India choosing to remain outside the NPT, (which it considers discriminatory), or the CTBT. India said it would consider being party to the CTBT only after the United States and China, both members of the select nuclear club, ratify the treaty.

"I expressed the hope that along with the US and China, India will sign and ratify the (CTBT) treaty," Hatoyama said.

"In response, Prime Minister Singh said should the US and China ratify the CTBT, a new situation will emerge. We firmly have to engage in these endeavours," the Japanese PM added.

Dr Singh refused to accept the conditionalities, merely saying India was committed to 'universal, voluntary and non-discriminatory' disarmament and had in place a voluntary moratorium on nuclear testing. He reiterated India's calibrated position on the NPT, which it considers 'discriminatory', and indicated that New Delhi would consider the CTBT if the US and China sign and ratify it.

He did make a pitch for civil nuclear cooperation with Japan, citing India's 'impeccable record' in nuclear non-proliferation, but asserted that the economic relationship would form the 'bedrock' of future ties.

What this means is that India's choices will be limited to some French and Russian companies, when it comes to seeking nuclear power reactors, because even major American companies like GE and Westinghouse, which manufacture atomic reactors and have expertise in this area, have tie-ups with Japanese companies like Toshiba, which will not sell such equipment to India.

Without Japan's nod, India's choices remain almost as limited as they were before the Indo-US civil nuclear deal and before the exemption from the Nuclear Suppliers Group last year.

Hatoyama, after talks with Dr Singh, said Japan could consider exporting reactors and other atomic material to India in the future, and will relax restrictions on high technology, dual-use trade between them. The two prime ministers sought to impart greater depth to the bilateral relationship by unveiling an action plan that encompasses
enhanced economic, defence, strategic and counter-terrorism exchanges and increased two-way trade.

According to Dr Singh, "The economic partnership between India and Japan is the bedrock of our relations. But over the last few years, we have significantly diversified our relations in the areas of defence, security and counter- terrorism."

India has become the largest recipient of Japan's overseas development assistance, as Japan struggles to contend with China's growth and retain its position as the world's second largest economy. The two countries aim to shortly conclude a Comprehensive Economic Partnership Agreement.

"The growth of our economy offers huge opportunities to substantially increase our trade and economic cooperation," Dr Singh told Hatoyama, adding, "In particular, there is great scope for expansion of cooperation in the areas of urban infrastructure, high technology, and renewable and energy efficient technologies."

Tokyo and New Delhi are clearly reaching out to each other as two major democracies, to enhance information exchange and coordinate on policy and security issues in the Asia Pacific region and on long term strategic and global issues, on the basis of the Joint Declaration on Security Cooperation, which is part of the Action Plan revealed today
to 'raise the relationship to a new level', an official said.

The Action Plan also pushes for greater coordination against piracy on the high seas by pursuing bilateral cooperation in existing multilateral frameworks in Asia, in particular the East Asia Summit, ASEAN Regional Forum and Regional Cooperation Agreement on combating Piracy and Armed Robbery against Ships in Asia. 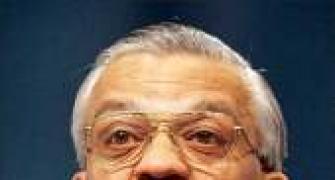 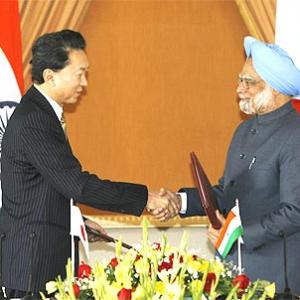 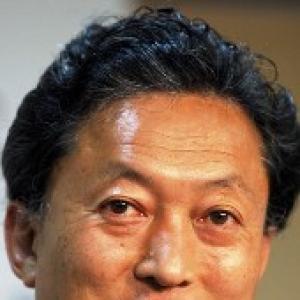