Communalising law and order situations is fraught with danger; we need to tread cautiously.
Interjecting a communal angle into what is purely a law and order issue does nobody good; it muddies the picture, fuels unrequited passion and distracts us from the core issue, says Vivek Gumaste. 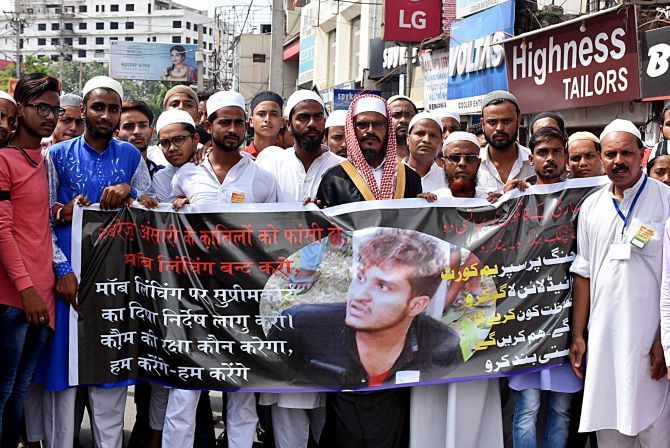 'Jai Shri Ram' is the new lightning rod in the theatrics of Indian politics; the focal point to trigger a another wave of high profile contentious controversies; the magic wand that Prime Minister Narendra Damodardas Modi and the Bharatiya Janata Party's adversaries believe will deliver them from the ignominy of a crushing defeat and infuse some life into what appears to be the terminality of their existence.

Every BJP electoral victory brings to the fore a novel shenanigan artfully crafted to put the party on the defensive.

In 1998 it was the now discredited anti-Christian violence, after 2014 cries of cow slaughter vigilantism rent the air and now it is the 'Jai Shri Ram' chant admixed with mobocracy that is taking a life of its own.

But how valid is this brouhaha?

Is the 'Jai Shri Ram' controversy really a rampage of brute majoritarian domination bolstered by the euphoria of humungous mandate as the BJP's detractors project?

Or is it an illusion, a manufactured smokescreen aimed at garnering political and ideological advantage by specifically targeting the government's 'Sabka Vishwas' resolve?

The first of the current rash of incidents appeared in the media immediately after the BJP's massive electoral victory on May 23.

News reports claimed that three individuals were allegedly beaten up and forced to chant 'Jai Shri Ram' by 'gau-rakshaks' on the suspicion of carrying beef in Seoni, Madhya Pradesh.

As per the police the three individuals were arrested on May 22 while the 'gau-rakshaks' were arrested later after a video appeared on social media on May 23.

What we know definitely about this case so far is as follows.

One, the meat that the three persons were carrying was bovine meat (verified) and the trio has been booked under provisions of the Madhya Pradesh Gau Vansh Pratishedh Adhiniyam (the anti-cow slaughter law).

Two, the 'gau-rakshaks' accused of taking the law into their own hands have been arrested (external link) and charged under various sections of the Indian Penal Code including 341 (wrongful restraint), 294 (obscene act), 323 (voluntarily causing hurt).

Both parties involved appear to have infringed the law in one way or the other and need to be punished.

As to the 'Jai Shri Ram' chant, the evidence is not very clear. A close review of the videos fails to conclusively prove this point: The audio track is too garbled. Yet some sections of the news media have gone to town publicising this aspect. The video can be viewed here (external link).

Similarly, another incident reported on May 27 in the Hindustan Times proved to be false. The headline screamed: 'Muslim man wearing skull cap assaulted, forced to chant 'Jai Shri Ram' in Gurugram'.

But the truth was quite the contrary: The FIR registered at the city police station, a copy of which is with HT, does not mention (external link) that the victim was asked to chant slogans or threatened to be fed pork.

So, a drunken street brawl had been coloured to give it a communal hue.

The death of Tabrez Ansari, a 24 year old who died in police custody on June 22 after allegedly being lynched by a mob on suspicion of theft in Saraikela Kharsawan area of Jharkhand, needs to unequivocally condemned; the culprits are deserving of the highest penalty. The institution of an SIT to probe the matter is apt and warranted.

But whether he was forced to chant 'Jai Shri Ram' as claimed by media reports is again open to question.

Jharkhand DGP Kamal Nayan Choubey told reporters that, 'Prima facie, the video appears to have been tampered with. The audio and video are not synchronous and hence to jump to conclusion without knowing the authenticity of the video footage would not be wise.'

Additionally, this charge was made by his family members (external link) who were not at the scene of the crime.

Before we jump to conclusions, we also need to be cognisant of the fact that Tabrez Ansari was caught red-handed during a burglary in progress; a detailed account (external link) of the robbery appears in a major newspaper.

There is a predictable story line common to most of these incidents. First, a person (usually belonging to one community) indulges in a secular criminal act and is set upon by people taking law into their own hands.

Subsequently someone or the victim makes a claim of being forced to chant 'Jai Shri Ram', thereby communalising a straight-forward case of breaking the law.

While not denying that some anti-social elements may be using the 'Jai Shri Ram' chant to their own advantage, there are enough gaps in the current narrative to suggest a larger conspiracy in play to embarrass the current government and gain political and ideological advantage.

In fact, several of these incidents have been proven to be fabrications.

Mob violence is not a new phenomenon in India; it is an endemic malady and a part and parcel of any type of protest. Neither is it confined to one community, political party or linguistic grouping and neither is it directed at one specific community.

Mob attacks in Jharkhand have claimed the lives of Muslims, Hindus and Christians, attesting to the non-partisan nature of this crime (external link).

The Muslim community that has come out on the streets to protest these incidents needs to introspect. Its holier than thou attitude takes a beating when we note that the community itself has traditionally been involved in mob violence.

The NRS Medical College (Kolkata) violence in which a mob of Muslims attacked several doctors resulting in some being critically injured, the harassment of a model on a Kolkata street, and the Chawri Bazar temple desecration in Delhi are recent examples of Muslim mob vandalism.

Ironically, demonstrations protesting Tabrez Ansari's death indulged in the same type of lawlessness that they were denouncing; a fact that was barely reported by the national media. In Ranchi, innocent Hindu bystanders were targeted (external link): 'In a procession taken out by members of a particular community condemning the mob lynching incident at Saraikela... members of a particular community vandalised property and stabbed one Vivek Srivastava with a knife...'

The sanctimonious outrage flooding the media today is sheer hypocrisy. This is not the first time that religious slogans have been used with a coercive intent.

On January 19, 1990, the Kristallnacht of the Kashmiri Pandits, Hindu minorities were driven out of Kashmir with the slogan 'Kashmir mein agar rehna hai, Allah-O-Akbar kehna hai' blaring from the roof tops of mosques; an act that many of us chose to play down for reasons of our own.

I bring this up not to justify the current 'Jai Shri Ram' controversy but to emphasise the double standards that we have. Double standards cannot facilitate a just society that treats one and all equally.

Communalising law and order situations is fraught with danger; we need to tread cautiously. Interjecting a communal angle into what is purely a law and order issue does nobody good; it muddies the picture, fuels unrequited passion and distracts us from the core issue.

Mob violence regardless of its etiology is a scourge that has no place in a civilised democratic society. There can be no qualifying or mitigating factors.

Any attempt to politicise or communalise criminal incidents must be strongly resisted. Such crimes must be dealt with firmly, decisively and promptly as a law and order problem -- nothing more nothing less.

This will automatically put an end to the ochlocracy prevalent in our society and the ugly corrosive influences including religious fanaticism driving such waywardness.