Having reached the Red Planet, ISRO can now focus on getting humans in space and secure the resources to do it 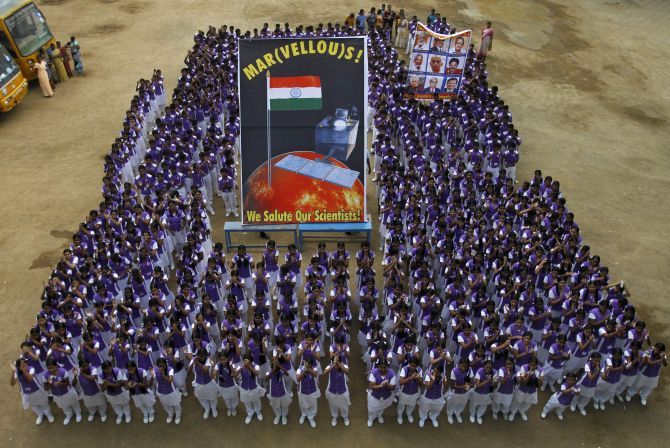 The Indian space programme achieved a great success on Wednesday, with the Indian Space Research Organisation’s Mars Orbiter Mission successfully manoeuvring into a Martian orbit early in the morning. The orbiter now has to settle into its new orbit, activate cameras and sensors that were lying dormant for the journey, and start observing the Red Planet and beaming back what it finds.

While we must congratulate the people who made this happen, it is never too early to ask what should come next.

India should set its sights squarely on human spaceflight, now that ISRO has successfully proved that it can reach Mars. Since ISRO took to Facebook and social media last October, it has sparked curiosity and got people interested in science, while instilling in them a sense of national pride. Human spaceflight can take this to the next level, and be instrumental in shaping an entire generation of aspiring astronauts, scientists and engineers.

The target of human spaceflight is necessary because successful space programmes need visible goals to orient themselves and not get lost along the way. They also need public confidence and steady government support since the development cycles are long.

Space exploration is primarily a pursuit of excellence: of exploring the unexplored, doing the impossible and pushing the frontiers of knowledge and human ability. As India has seen in the last decade, having ambitious plans to get to Mars and the moon inspired ISRO to step up its game.

Clear targets like human spaceflight breed innovation and spark creativity. For the Mars mission to succeed, various ISRO wings had to align their objectives and work at their best, as a complex mission requires flawless execution. ISRO needed to figure out deep space communication, precision orbital planning for such a long and complex journey, as well as mechanics and electronics that leave little room for error -- and they had to do all of this within a tight deadline.

Similarly, human spaceflight will require ISRO to develop technologies for more powerful launch vehicles capable of transporting larger capsules to space. It will need the ability to re-enter the atmosphere and reach back to earth safely. It will also need all the trappings necessary for humans to survive and thrive while in space, and more. These skills and technologies are transferable, and will eventually aid ISRO’s other efforts and the economy at large.

However, India will find it extraordinarily difficult to achieve human spaceflight without changing three things.

First, ISRO’s annual budget needs to be doubled by 2015. The department of space’s budget estimate for 2014-15 is Rs 7,200 crore, probably lower than 2013-14’s Rs 6,800 crore once you account for inflation. Further, the Rs 7,200 crore is just 0.4 per cent of government expenditure, and less than 0.07 per cent of India’s gross domestic product. India’s space programme simply needs more money if it needs to do a lot more.

However, spending more on space is difficult, as we tend to make a virtue out of the inexpensiveness of our space programme. As I had written in December last year, ISRO spent much more than Rs 450 crore on the Mars mission, and did not count staff salaries, the expense of using ISRO facilities and equipment and more. In all, the Mars mission may well have cost us over Rs 1,000 crore, and human spaceflight may end up costing more than Rs 10,000 crore. India needs to commit itself to spending what it takes.

Second, the Indian space programme needs to take the public into confidence. The dream of human spaceflight needs to be shared by ISRO, national leaders and the public. We have a prime minister who stands by the Indian space programme. Not only does he retain the space portfolio with him, he speaks often about ISRO, and also visited Bangalore to catch the Mars orbital insertion live from the ISRO Telemetry, Tracking and Command Network centre. With public support at hand, there is no reason the ISRO budget cannot be doubled and safeguarded, even with a large fiscal deficit.

John F Kennedy gave one of his most memorable speeches in September 1962, telling the American public why National Aeronautics and Space Administration is trying to put a man on the moon. At the time, NASA did not really know how to do it, and it took till 1969 for that vision to become reality. We need the same vision and public articulation for India’s space programme.

Third, ISRO needs to complete its organisational transformation to one that is outward-looking and attracts global talent. ISRO’s work in the last century took place in a culture of isolation, when India was cut off from advanced technologies developed elsewhere in the world. This is no longer true today. ISRO is already partnering with NASA, the Japan Aerospace Exploration Agency, China National Space Administration and others on a variety of projects, but it needs to go beyond it.

While ISRO is struggling to get its big GSLV Mk-III launch vehicle off the ground, the private agency SpaceX has succeeded in developing the Falcon 9, a large vehicle capable of launching over 13,000 kilogram to low earth orbit. This is slightly more powerful than the GSLV Mk-III, and about nine times as powerful as the PSLV. SpaceX also has an edge in other technologies such as re-entry vehicles and reusable vehicles. Isro should partner with national and private space agencies across the world. ISRO can do this today not as a supplicant or a buyer, but as a confident partner, sometimes competing and sometimes collaborating with various agencies, and learning from each other.

In 1984, Russians helped the Indian cosmonaut Rakesh Sharma get to space. In 1997, Indian-born Kalpana Chawla made it to space as an American astronaut. The time has come for India to take on the mantle, and put an Indian in space before 2020.

-- The writer is the head of policy research at the Takshashila Institution, an independent think tank and school of public policy.