New Delhi remains a priggish suitor to Washington's overtures, but it has begun appreciating potential tech benefits to ties with the US, notes Ajai Shukla. 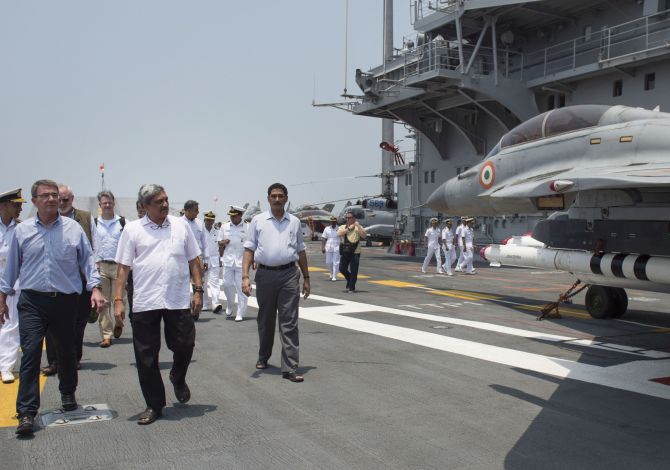 Ashton Carter is in India again for his third visit in a year as America's defence secretary. He is one of an apparently inexhaustible stream of United States officials making frequent pilgrimages to India to participate in an incredible 80 dialogues under way between the two countries.

Last month, Delhi hosted Admiral Harry Harris -- the chief of the US Pacific Command, a domain that in his words 'stretches from Bollywood to Hollywood' -- who expansively looked forward to the day when 'American and Indian Navy vessels steaming together will become a common and welcome sight throughout Indo-Asia-Pacific waters.'

A couple of days later, Defence Minister Manohar Parrikar subjected Harris' proposal to a dose of reality, observing testily that the question of joint patrolling did not arise. The Indian Navy has never carried out joint patrols with a foreign navy. However, it routinely carries out 'coordinated patrols' with the navies of maritime neighbours, each one's ships and aircraft remaining on their respective sides of the International Maritime Boundary Line.)

Undeterred by India's standoffishness, an American Congressman, George Holding (a Republican from North Carolina) has introduced a Bill in the House of Representatives entitled the 'US-India Defense Technology and Partnership Act.'

If passed by the US Congress (which is packed with India-huggers), this will write the defence relationship into US law, formalising our status as 'a major partner of the United States.'

US President Barack Obama's administration has nurtured the US-India relationship, instituting the Defence Technology and Trade Initiative and establishing an 'India Rapid Reaction Cell' in the Pentagon to deal with bureaucratic hurdles.

The new legislation seeks to write these ad hoc measures into US law so that subsequent administrations inherit these structures. The Bill also notes, somewhat controversially: 'The (US) President is encouraged to coordinate with India on an annual basis to develop military contingency plans for addressing threats to mutual security interests of both countries.'

Yet, New Delhi remains a priggish suitor in the face of Washington's ardent embrace. Even those Indian mandarins who are willing to put aside Cold War confrontation and two generations of technology denial regimes do not yet see unalloyed strategic convergence with the US. True, there are common concerns about an aggressive China's emergence.

Sure, the US wants to build up India and its military as a bulwark that would share the burden of regional security. Yes, Prime Minister Narendra Modi's 'Act East' policy aligns with the Obama administration's 'rebalance to Asia.' Even so, most insiders sum up the strategic relationship thus: Convergence to the East, divergence to the West.

Indian policymakers note bitterly the American belief that the road to peace in Kabul runs through Islamabad, thereby cutting New Delhi out of a significant role in Afghanistan. They point out that, notwithstanding the Indo-US convergence on China, Washington tacitly supports the China-Pakistan Economic Corridor and the development of Gwadar port, which will strengthen the China-Pakistan relationship.

Despite America's counter-terrorism dialogue with India and increased intelligence sharing -- which Indian officials downplay as 'tactical cooperation' -- Washington accepts the continued existence of India-focused jihadists in Pakistan, while demanding tough action by Islamabad against pan-Islamist groups in Khyber-Pakhtunkhwa and the Federally Administered Tribal Areas.

The US continues supplying cutting-edge war-fighting equipment, such as Block 50/52 F-16 fighters, to Pakistan for 'counter-terrorist operations,' ignoring New Delhi's protests that such capability is not needed to fight terrorists.

A top Indian policymaker sums up: 'India and America were never together on AfPak, even during the George W Bush presidency. We are not in alignment now either, and we never will be.'

Yet, signalling growing strategic maturity, New Delhi has de-coupled US-India ties from the AfPak paradigm and is, in fact, pushing to militarily associate India with US Central Command, which is responsible for America's military interests in AfPak, Iran and West Asia (India and the Indian Ocean fall under the US Pacific Command, with which New Delhi already works.)

That has allowed the defence relationship to steam along nicely. An expanded Indo-US defence framework agreement was extended for a decade till 2025. As US policymakers never tire of repeating, the US does more exercises with the Indian military than with any other.

This summer, the Indian Air Force is taking a big contingent of aircraft to the US for the highly regarded Red Flag Exercise. American defence equipment is flowing in steadily and, if India contracts for the M777 ultralight howitzer and signs repeat orders for C-17 Globemaster-III transport aircraft and P8-I maritime aircraft, the US would retain its new status as India's biggest arms supplier.

Under the DTTI, set up in 2012 to facilitate US-India defence trade, India seems likely to request US expertise in designing its second indigenous aircraft carrier (the first is almost built and is scheduled to be commissioned in 2018).

If, as seems likely, the Indian Navy switches from its current (Russian style) ski-launch tradition to an (American style) catapult system for getting fighters airborne from the carrier, a host of American systems, including the F/A-18E/F Super Hornet fighter, carrier-launched airborne early warning aircraft like the E-2D Hawkeye, and specialist helicopters could make an entry into the Indian Navy.

Just as Russia has come to dominate the land segments of armoured vehicle and air defence systems, the US may similarly dominate several dimensions of the Indian Navy's aircraft carrier battle groups.

Dr Carter knows that, at least in the short-to-medium term, the US-India partnership would obtain greater momentum from high-technology transfer than from talking up the China threat.

The DTTI framework has promise, now that the Pentagon has begun viewing it as a mechanism for joint development, rather than just as a backdoor through which US vendors could bypass the Indian acquisition process.

New Delhi, too, has begun to appreciate the potential technology benefits in the relationship, now that it is looking beyond the Make in India slogan, which is more about low-tech, build-to-print component manufacture, than high-end systems engineering.

India has a long tradition of defence trade on a government-to-government basis. But America is different, with its large private defence vendors, who own the intellectual property that goes into their systems. That means New Delhi cannot pick up the phone to Washington and say, 'Will you give us this technology?'

Although the US government does control technology, obtaining access will also require a parallel process of negotiating with vendors and making a business case for transferring systems, technology and manufacturing to India. And that would be best done by India's new crop of private sector defence vendors.