But not for too long, as TTV Dinakaran can still play spoilsport, says N Sathiya Moorthy. 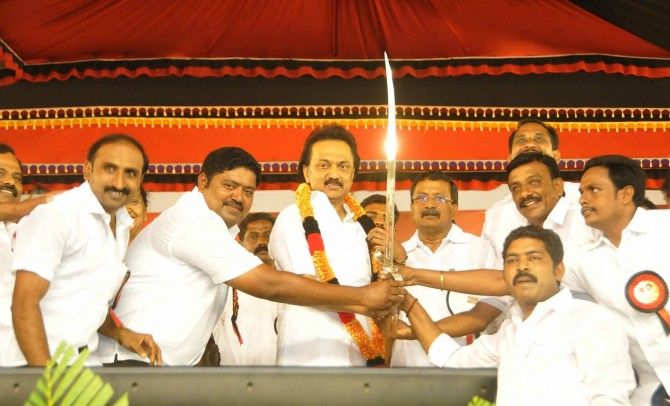 With acting governor Ch Vidyasagar Rao reportedly telling political interlocutors that he could not intervene in what is essentially an ‘internal matter’ of the ruling All India Anna Dravida Munnetra Kazhagam factions, he may have initiated a process that could lead to early elections to the state assembly, with final advantage going to the Opposition DMK-led combine, which is likely to expand in the coming weeks and months.

“I am ready to bat, but the ball is not in my court,” Rao is reported to have told a delegation of what remains a peripheral Opposition group, whose leaders had called on him earlier in the week.

He was referring to his decision, if any, on the individual letters presented to him by 19 ruling party MLAs identified with the T T V Dinakaran faction, over a fortnight back.

But by saying so, he may have unintentionally or otherwise served the ball to the DMK’s court, with the Dinakaran faction playing the second on the other side. The Opposition says the governor himself was playing the ‘second’ for the ruling EPS-OPS factions led respectively by Chief Minister Edappadi K Palaniswami and Deputy CM, O Panneerselvam.

It is anybody’s guess why the governor should open his mind, if at all, to a group of visitors who did not represent either the Dinakaran faction, or the DMK, both of who had separately submitted different memoranda to him, but with the implied or explicit request for him to ask CM Palaniswami to face a floor-test.

If the Raj Bhavan had informed the signatories, earlier or later, about the governor’s position/decision, there is no official report from anyone on this count.

A day after the governor’s reported position was made known, DMK working president and leader of the opposition, M K Stalin, predicted the fall of the Edappadi government ‘soon’.

Addressing party cadres in the neighbourhood of the chief minister’s native place in western Tamil Nadu, he declared that the DMK would not make a back-door entry to power, piggy-back riding on someone else’s back, but would reach there with 200 of the 234 seats in the state assembly on its own steam.

On the one hand, Stalin was seeking to shut out criticism from ruling AIADMK faction leaders, including some senior ministers, that he was conspiring with Dinakaran to oust the legitimately-elected government of ‘Amma’, the late Chief Minister Jayalalithaa.

More specifically, his reference to winning 200 seats also indicate that the DMK was actively considering the possibility of en masse resignation by party MLAs, and possibly those of the Congress ally, all adding up to 98, thus forcing an election, which according to the DMK’s calculations, the ruling combine was shy was facing.

The developments of the past year, starting with Jayalalithaa’s hospitalisation and death, in the AIADMK has emboldened the DMK that the Tamil Nadu people, including staunch AIADMK cadres/voters, are frustrated with the all factions of the ruling party.

The post-merger affairs in the AIADMK has not only strengthened that feeling but also the DMK cadre resolve that they are ready to face fresh polls any time soon.

Whatever doubts that some incumbent DMK legislators and those that had lost the polls for the party in May 2016 are emboldened now than any time since, to be able to contest and win their own seats. For others, they hope to win all those additional seats beyond whatever the DMK and allies now have in the assembly.

While it is true that mass resignations by DMK combine can make the entire nation sit up and take notice, with the pressure building upon the Centre and the governor, it will not mean anything if the ruling faction patches up with the minority TTV camp within the AIADMK.

Definitely, the TTV camp’s head-count has gone beyond 19, which itself has brought the government’s floor majority below the required 118, but the absence of nearly another 20 or so from the informal meeting that the ministerialists called in the party office has sent down jitters down the CM’s camp.

But from the DMK’s perspective, they could seek to precipitate matters if and only if the TTV camp submits their resignations to Speaker P Dhanapal. Else, the AIADMK factions could patch up on the strength of any precipitate threat from the DMK, and they all could live happily ever after with the Opposition left in the lurch, good and proper, for the next four years of the government’s life.

Alternatively, should the DMK quit en masse ahead of any such move by the Dinakaran camp, then the ruling faction could just go ahead and have the Speaker disqualify all or some of the 19 MLAs with the latter, and go ahead with their acts of governance. They could even have a farcical floor-test, and pass it too.

All relevant provisions of the Constitution only refer to the government having to win a simple majority of ‘members present and voting’. Disqualified members as also members who boycott the House, or suspended, or are present but did not vote, won’t count.

Independent of the disqualification threat hanging over the head of the Dinakaran MLAs, 21 DMK legislators, including Stalin, are facing a privilege motion for bringing banned ‘gutka’ into the House, to prove that the same was freely available in the marketplace across the state.

Naturally, the ruling party has a majority in the panel, and some of the DMK members on it have also been hauled up on the ‘gutka’ issue. Customarily and otherwise, the House, acting on a possible recommendation of the panel, could order the suspension of the members for a pre-determined period, possibly the whole of the session.

If such were the case, the government could pass a floor-test of its own volition, with the DMK members suspended and the Dinakaran followers disqualified.

For now, however, the Dinakaran camp has adopted a carrot-and-stick policy, in the light of the governor’s disclosure and Stalin’s declaration. Thangathamizh Selvan, a senior camp-follower of the Dinakaran group, has declared that they did not care for their MLAs position if that alone would bring down the ‘corrupt’ EPS government.

At the same time, Divakaran, Dinakaran’s uncle (brother of jailed party ‘general secretary’ V K Sasikala Natarajan), has declared that the party ‘could not go back to the days’ of a single-leader format. It could only be a collective leadership but without five incumbent ministers, including CM Palaniswami.

The plausible interpretation is that the Dinakaran camp, frustrated as it is even while purportedly amassing more MLAs, is sending out signals for a patch-up but on its terms, and with the threat that they were ready to topple the government, thus giving lie to the other faction’s hopes that they would not do so, fearing early elections and possible, collective loss.

Before taking any irrevocable decision of the kind, the Dinakaran camp has announced its plans to parade their MLAs before President Ram Nath Kovind. For now, the DMK Opposition in a graded and graduated move before reaching there, sent in an all-party delegation with a high-powered team of national alliance leaders, to call on the President on Thursday.

Though the President reportedly promised to look into the matter, the Centre, it would seem, is backing the governor. A day before the DMK-led delegation met the President, Home Minister Rajnath Singh too said that the governor could not get involved in the ‘internal matters’ of the ruling party in the state.

Better or worse, Rajnath Singh, according to media reports quoting AIADMK ruling faction sources, also promised a delegation of Tamil Nadu ministers that the governor would delay matters as far as he could.

In between, the DMK also seems to be toying with the option of expanding the alliance to include the two communist parties and Dalit-centric VCK apart from one-time arch-rival Vaiko’s MDMK, but only on its terms.

In election 2016, the DMK combine lost out to the incumbent AIADMK by an overall margin of about one per cent of the votes polled across the state. It exposed an inherent weakness when Jayalalithaa was around, leading the rival AIADMK and also the government.

It meant the DMK required a vote-cushion, but would still have had problems accommodating seat-share ambitions of prospective allies compared to a reasonable evaluation of their individual vote-share and contribution to the kitty.

Should the elections get advanced, and in ways strategised by the party, the DMK might consider cold-shouldering the new allies, but however would have to consider the MDMK and Vaiko with tender care and excessive caution at the same time.

As may be recalled, after DMK supremo Karunanidhi fell irrecoverably ill in December last, Vaiko called on him in mid-August, and readily agreed to one-time personal bête noire Stalin’s personal invitation to participate in the platinum jubilee celebrations of party organ, Murasoli, on September 5.

Simultaneously, the DMK leadership should also be considering their next moves, whether to move the court as Stalin had indicated earlier or precipitate a constitutional crisis by party MLAs quitting en masse.

In terms of tactics, the Dinakaran camp has less time, as the ‘general council’ of the rival faction has been called for September 11, when they would have to be seen as removing jailed Sasikala as AIADMK general secretary.

In between, Speaker Dhanapal has also issued a second notice to the 19 Dinakaran MLAs, on the disqualification issue, seeking their response.

On both issues, the Dinakaran camp could still go to the courts, but the delayed judicial processes could steal their thunder, possibly for good.

However, they have also won a silent, tactical victory, which the other camp does not seem wanting to acknowledge.

Rushing to Delhi with plans to file common ‘withdrawal letters’ before the Election Commission to facilitate the restoration of the AIADMK’s ‘Two Leaves’ symbol, the re-united EPS-OPS camp seemed to have come up with a huge road block instead.

They seemed to have been since advised that with Sasikala being the respondent to the original petition from the OPS faction earlier, any unilateral withdrawal of the earlier complaint by them could mean that the Sasi-Dinakaran camp could end up owning the symbol, and not as they had thought.

Already, quoting from the AIADMK bye-laws, the Dinakaran camp has been crowing that only the general secretary of the party could convene the general council meeting, and that it was thus for Sasikala to do so, whether or not she was ‘acting’ or otherwise.