Is your brain connected to Wi-Fi?

Imagine a world in which a human only thinks, and a robot cooks the whole meal, says Kumar Abishek. 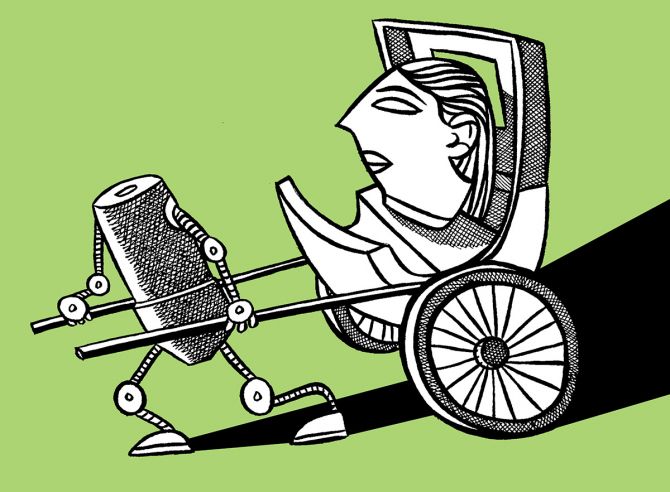 Tech entrepreneur Elon Musk and his secretive start-up Neuralink are trying to build a 'Fitbit in your skull' -- an ambitious device to connect the human brain to a computer.

This technology, according to them, one day may allow those suffering from paralysis or conditions like Parkinson's disease to control their body movements and manipulate machines.

But Mr Musk sees its implications far beyond new medical treatments by helping create a symbiotic relationship between humans and artificial intelligence (AI).

The technology behind the coin-sized chip, or links, was recently demonstrated via a pig named Gertrude, who had a brain chip implanted two months earlier, Mr Musk said.

He showed the chip connected to neurons in the pig's snout, receiving real-time signals as the animal shuffled around, sniffing hay.

There was a beep every time Gertrude's snout was touched, indicating activity in the part of her brain seeking out food.

'The future's going to be weird,' Mr Musk proclaimed.

'This is solid engineering, but mediocre neuroscience,' he was quoted as saying in a press release put out by the UK's Science Media Centre.

Our brains are composed of neurons, which talk to each other via network points called synapses -- they communicate through chemical signals called neurotransmitters.

All our experiences are just neurons firing electrical signals, or action potentials, which are momentarily converted into chemical ones through the release of neurotransmitters; information is then passed on to other neurons.

Multiply this process by 100 billion and that's our brain in a nutshell.

Neuralink and other brain-machine interfaces (BMIs) use electrodes that are positioned close to neurons, enabling them to detect electrical fields produced by action potentials and pass information to a data recording system.

'I don't think the barriers can be overcome by technology alone,' Mr Jackson wrote in The Conversation.

'Today, most BMIs use an approach called 'biomimetic' decoding. First, brain activity is recorded while the user imagines various actions, such as moving their arm left or right. Once we know which brain cells prefer different directions, we can 'decode' subsequent movements by tallying their action potentials like votes.'

But can this ever be generalised to more complex mental processes?

'Even if Neuralink could sample enough of the 100 billion cells in my brain, how many different thoughts would I first have to think to calibrate a useful mind-reading device, and how long would that take? Does my brain activity even sound the same each time I think the same thought? And when I think of, say, going to the Moon, does my brain sound anything like Musk's?' he asked.

Mr Musk rejected these apprehensions in a tweet: 'It is unfortunately common for many in academia to overweight the value of ideas and underweight bringing them to fruition.'

Some researchers suggest AI could help circumnavigate these problems.

Neuroscientists have been exploring activity patterns of large groups of cells, and this may help simplify mind reading.

But we are far from deciphering our thought processes, currently.

Despite these challenges, Neuralink tech holds both promise and prospects.

Every Neuralink chip measures roughly 4x4 mm and connects to the brain through electrode threads.

This technology would use neurosurgical robots to insert electrode threads within the brain.

It can create a scalable high-bandwidth BMI system.

The first key advancement is flexible threads -- claimed to be safer than currently used materials in BMIs.

According to a white paper by Mr Musk and Neuralink, the system may include 'as many as 3,072 electrodes per array distributed in 96 threads'.

The threads are 4 to 6 microns in width -- much thinner than a human hair.

The current technology uses much larger chips and stiffer electrodes.

In the future, Neuralink scientists hope to use a laser beam to get through the skull, rather than drilling holes, they told The New York Times.

Early experiments will be done with neuroscientists at Stanford University.

The full potential of the number of electrodes Mr Musk is planning is difficult to fathom, given that using just around 250 electrodes, humans have been able to control robotic limbs.

The best BMI currently used for Parkinson's patients has 10 electrodes.

Besides, Neuralink wouldn't only read data from the brain but also upload information to it.

Brain implants aren't new; research on them began way back in the 1970s.

Neuralink is trying to reimagine BMIs, just like what the first iPhone did to mobile phones.

According to Neuralink, these small chips would be connected to a tiny wireless battery-powered gadget behind the ear.

And, this would then be connected to a smartphone via Bluetooth or WiFi.

Neuralink may be a good example of technology outstripping our current ability to know how to use it.

Imagine a world in which a human only thinks, and a robot cooks the whole meal.

A world where a book's contents, without reading them, are uploaded to one's brain.

A world in which I just had to construct sentences in my head and the whole piece was written out.