'When it comes to national politics, the Modi-Shah BJP has successfully redefined secularism.'
'If a party like the Congress has to have a future, it has to move closer to the secular centre from the far Left where its Left infatuation during the UPA years dragged it,' argues Shekhar Gupta. 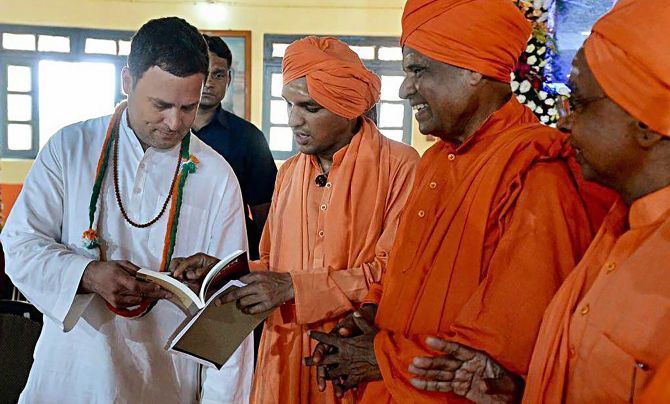 United Progressive Alliance Chairperson Sonia Gandhi spoke a line at the recent India Today Conclave -- that the Congress paid for being seen as a Muslim party -- and sparked a larger debate on the status of India's Muslims, their culture and politics, and how popular minds now responded to it.

Influential voices took this forward, notably Harsh Mander and Ramachandra Guha in response in The Indian Express. We need to also explore the political meaning.

It is inadequate to keep the argument confined to culture, lifestyle, symbols, in short 'Muslimness'. Muslims, or any other faith for that matter, can choose what symbols they prefer. The question is: Will it get them political empowerment?

Sonia's regret is that her party's actions as well as the Bharatiya Janata Party's campaign played into the Hindu majority's fears of appeasement, disempowerment, and, most of all, terrorism.

Since the 1989 Mandal-Mandir phase, India has seen the rising paradox of the vast majority acquiring a minority complex.

You can again protest that the Rashtriya Swayamsevak Sangh and BJP fuelled it, but then you protest too much.

If one side can exploit the minorities' insecurities, the other can respond by persuading the majority to feel that way.

The Congress played one side of this game brilliantly until, let's say, 1985, when the Shah Bano blunder broke its momentum.

That gave the RSS/BJP an opening into vast sections of the Hindus, who voted by default for the Congress.

As a result, the Congress has never won a majority again.

More importantly, it has also struggled to win back power in states with a significant Muslim vote (10 per cent or above) since then.

Sonia knows what she is talking about. Her party paid severely for what was seen as unrelenting minorityism.

The sad truth is that it didn't do very much for the Muslims. They saw through the hypocrisy.

See it like a Muslim. A Congress government carries out the Batla House encounter, and gives the posthumous Ashok Chakra to the officer who led it.

Then its most audible general secretary calls it fake and claims it brought tears to Sonia's eyes.

When UPA-1 came to power, it repealed POTA (Prevention of Terrorism Act) because it was rightly seen to victimise Muslims.

Then, it quietly brought other provisions that made this repeal a sham.

It appointed the Sachar Committee but failed to act on its recommendations.

On top of all of this came that Manmohan Singh statement that minorities had the first right to national resources.

It was probably idealistic, but a political misstep. Politicians cannot act and speak like activists.

Again, even that was followed by no action. The Muslim obviously saw this as fake.

What a dangerously cynical gang of minority appeasers is this!

They kill terrorists and then hail them as victims in the same voice -- all for votes. So I've had enough.

The Congress ended up losing both, the Muslims, who moved decisively to strong state-level leaders, and the Hindus because, as Sonia rightly put it, hers was seen as a Muslim party.

The devastation of the Congress apart, the more significant fallout of this flawed politics is a disempowerment of Muslims, bordering on disenfranchisement.

There's never been a moment in India's political history like this: No Muslim MP in the majority party in the Lok Sabha, no key central ministry (the only Muslim in the Cabinet is the minister for minority affairs), no secretary-level officer in a key ministry, no heads in top defence and intelligence organisations, and no chief minister, except in Jammu and Kashmir's tricky coalition.

In Uttar Pradesh, the BJP won nearly 80 per cent seats without fielding a Muslim, never mind that 20 per cent of the voters are Muslim.

The Muslims didn't vote for this. Their paranoia now shows in the rising appeal of Muslim leaders such as Asaduddin Owaisi and Badruddin Ajmal.

It is in contrast with the trend since Partition.

After the departure of Jinnah, Indian Muslims never trusted a fellow Muslim as their leader, preferring a Hindu instead.

Post-2014 politics has exposed the limitations of the minority vote and the cynical imprudence of treating this as synonymous with the secular vote.

Congress stalwarts of the past knew that the Muslim vote by itself could not win them elections and built larger coalitions with key caste and social groups.

These were impregnable until the flip-flops began, alienating both. These coalitions broke.

The BJP took away the upper castes in the heartland and the western states, the Muslims shifted to OBC leaders with caste vote banks large enough to keep the BJP out.

In the past, BJP leaders used to bitterly complain that the Muslims had a veto on who ruled India because of their bloc votes.

The Modi-Shah BJP has reversed that. If they can consolidate enough Hindus, they can ignore the Muslims.

This cannot change until those with claims to secularism and minority votes reset their politics. They have no hope if they can't bring a critical mass of the majority back.

This debate, therefore, isn't about burqa, hijab, skull cap, beards, triple talaq, or Haj subsidy. It will serve no substantive purpose. It may enhance the Muslim sense of persecution and further deepen the 'secular' parties' confusion and self-pity.

Unless they bring about a fundamental shift in their own politics, they will not survive.

A few liberal campuses, the seminar circuit, and the opinion industry may hold out.

But when it comes to national politics, the Modi-Shah BJP has successfully redefined secularism.

Liberal intellectuals and those representing the so-called Left-secular forces either do not understand this change or won't accept it.

They set the bar for the test of secularism so high that nobody can pass it and survive in today's politics.

If a party like the Congress has to have a future, it has to move closer to the secular centre from the far Left where its Left infatuation during the UPA years dragged it.

Like it or not, that is the message in Rahul Gandhi's temple visits.

That's what Sonia meant when she lamented that the Congress was seen as a Muslim party.