'It is nauseating to hear jingoists shout that this is a country that worships women as Goddesses. Leave Goddesses aside, do you treat women as human beings here,' asks Shobha Warrier. 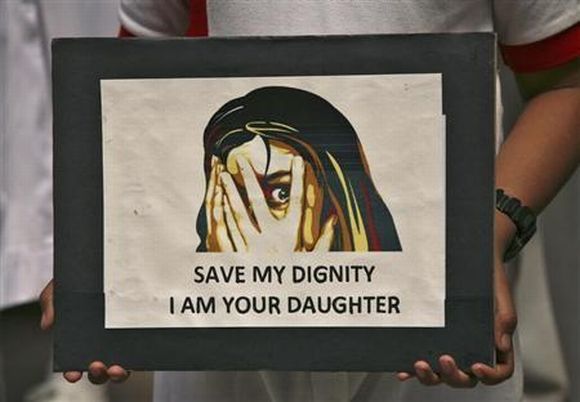 India's daughter dies brutally again. She has been silenced cruelly; this time not by a rapist, but by the State. Along with her, a bereaved father and mother are also silenced, with nobody to hear their sad tale and nobody to stanch the tears of a mother in agony.

The very day the film India's Daughter was banned, there was news of another girl getting raped. According to the Crime Record Bureau, two rapes occur every hour in India. But then who cares about such disturbing statistics?

Now that the story of the daughter that shook the conscience of a nation has been buried, politicians from all parties must be delirious with joy to see the muffled silence of the daughter and her parents.

After all, you need courage and fortitude to accept your weaknesses and shortcomings -- this is something that neither leaders nor the State has. Everybody wants to paint a rosy picture where everything is hunky dory with India.

The filmmaker has not done anything to humiliate you; it is our people, the people of our own country -- the rapist and the lawyers who have exposed themselves and dishonoured Indian society.

The State should realise that the dirty worms are from our own soil and however hard you try to hide them away with mud, they will wriggle out. They are dirty, slimy and rotten, but they exist, and in very large numbers too.

It is nauseating to hear jingoists shout that this is a country that worships women as Goddesses. Leave Goddesses aside, do you treat women as human beings here?

The lawyer of the rapist who claims to touch his mother's feet everyday has no qualms in admitting that had his daughter gone out with her boyfriend after 7 at night, he would have poured petrol over her and burnt her.

Is this the voice of a lone deranged man? No, there are millions of Indian men who believe in such gory things and do it unabashedly too.

Another lawyer had the audacity to say in the film that girls should only go out with fathers, uncles and brothers and not with boyfriends, and that if a girl did such 'dirty' things, the result would be something like what happened to 'India's daughter'.

Do any of these people remember Sanjay and Geeta Chopra? Sanjay was murdered while his sister Geeta was raped and brutally killed. It happened 37 years ago, in 1978. Has anything changed in the last 37 years? The same city, the same situation, the same result, and the same reaction from society.

All those crying foul about disclosing the name of this rape victim should remember that the Government of India has instituted a bravery award in Geeta and Sanjay Chopra's names. How does a name matter when such cruelty has been bestowed upon an innocent soul?

The State is only concerned about the image of the country, about tourism getting affected. It wants to project the image of an emerging superpower, a country with a glorious past, a tolerant country that only believes in atithi devo bhava.

I wish to ask them: What image are you talking about?

The image of people putting their new-borns to death because they are girls?

It was to stop this barbaric and inhuman practice that Jayalalitha launched the cradle baby scheme in the late 1990s. Cradles were hung outside hospitals so that families could abandon their unwanted girl children there instead of murdering them in inhuman ways. Is this the way our great culture welcomes the girl child to this world?

The image of men harassing and threatening women who dare walk down the streets on their own? This happened to me 20 years ago in Kochi.

I stepped out onto the road after a work assignment at 8 in the night and was about to cross the road to walk to where I had parked my car. The road was deserted when a man suddenly walked up close to me and asked me aggressively to come with him. I ran to my vehicle in fear.

The champions of our great culture may ask, just as they do of every woman who has faced rape or sexual harassment, why I chose to step out for work after the sun had set. 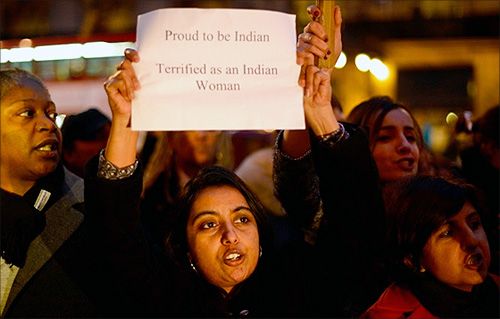 Why do we have to still tell our daughters to be careful at night? Why do we demand that they come back home before it is dark? Dr Sunita Krishnan told me in an interview that we have to teach even the smallest girls to understand what a bad touch is.

The image of a country where widows are still treated like rubbish?

This happened to me just last year in Chennai. When everybody else in our apartment complex was invited to a neighbour's wedding and reception, I was only invited to the reception.

I was shocked beyond belief when I realised that I had not been invited to the wedding because I had been widowed earlier that year.

I was an inauspicious widow who could not be invited to auspicious functions like weddings, poojas, kolus.

All through the last year, I received not a single invitation to a pooja or kolu! I had previously laboured under the impression that this sort of thing only happened in rural India.

I never thought I -- an emancipated, modern woman in one of India's biggest cities -- would be humiliated in this way.

Will this great society treat a widower like this?

I feel everybody -- be they male or female -- should watch India's Daughter and introspect on why so many men in our society have such disgustingly shocking attitudes towards women. But no, our society wishes to bury our collective heads in the sand.

It has been three years since the rape occurred, but the criminals are still alive. Instead of convicting the criminals or speeding up the legal process, the State would much rather ban a film under the pretext of protecting India's image abroad. All this while the conviction rate for rape cases in India is just 20%!

She was a 'light' to her parents. With her passing, we had hoped that the light that has gone out of her parents's lives enlightens those who still choose to live in darkness.

Her father had said her death had caused a storm in the country. Unfortunately, all that the storm left in its wake was the detritus of a society unwilling to introspect or change.