'So far there is no clear money trail nor an indisputable smoking gun.'
'But that doesn't mean there aren't disturbing questions and a strange resistance by the government to reveal the price, which only adds suspicion to concern,' observes Karan Thapar. 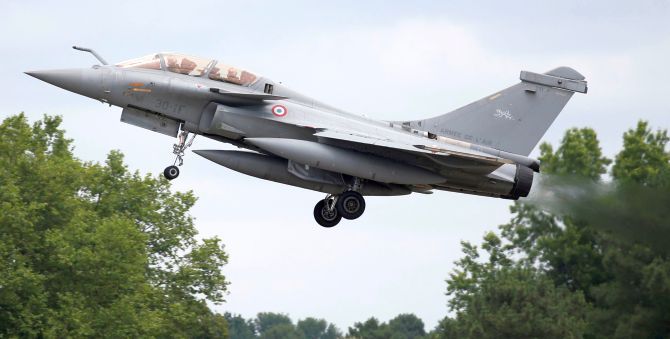 Depending on who you talk to, the Rafale deal is either mired in scandal and controversy or it is the very epitome of squeaky-clean transparency.

It is hard to imagine two positions further apart. Which is why it may be a good idea to sit back and take a careful look at all that we have been told and then ask what it adds up to.

Let me focus on three concerns.

First, the decision to reduce the number of planes from 126 to 36.

Did this happen in disregard of the air force's requirements? If the government has now issued another tender for over 100 planes how is the reduction justified?

On September 1, Air Chief Marshal S Krishnaswamy (retd), a former air force chief, wrote that in 2014, the air force made a request for an urgent purchase of two squadrons, that is, 36.

Air Chief Marshal Birender Singh Dhanoa, the present air force chief, has defended this 'emergency procurement', claiming there have been several instances of similar procurements in the past.

In such circumstances, ACM Dhanoa adds, two squadrons is the ideal quantity. But the rest of the air force's requirement is still uncatered for and who knows how long that will continue.

The second issue is the price.

In November 2016, the government told Parliament that each Rafale would cost Rs 6.7 billion.

A year later both Dassault and Reliance Defence claimed the price would be Rs 16 billion.

The latter figure has led many to claim the planes are considerably more expensive than the ones the Manmohan Singh government was negotiating.

Finance Minister Arun Jaitley, however, insists the cost negotiated by the United Progressive Alliance included room for price escalation and currency fluctuation and, therefore, today the cost per plane would be 9 per cent higher than what the National Democratic Alliance has negotiated in terms of the simple plane and 20 per cent higher in terms of the weaponised plane.

Air Vice Marshal Raghunath Nambiar, the air force's deputy chief, has gone a step further. He says the present Rafale deal is 40 per cent cheaper than the earlier one.

In this connection, it is interesting to note a change in the present government's position. Initially, it claimed the higher price per plane was because of India-specific add-ons.

When Arun Shourie and Yashwant Sinha revealed the 2015 agreement specified the NDA was buying planes with the same configuration as the UPA's, the government became silent on this subject.

The third issue is the decision to award the Rs 300 billion offsets to Anil Ambani's Reliance Defence.

Critics point out that this company has no experience of manufacturing aircraft whilst it carries a heavy debt burden.

And now Francois Hollande, the then French president, has claimed Reliance was forced on the French by the Indian government.

In his defence, the chief executive officer of Reliance insists Dassault has a right to give the offsets to any Indian partner it chooses, a point corroborated by the defence minister in recent interviews.

Second, no component of the 36 planes will be made in India.

Third, it is no secret Dassault and HAL could not reach an agreement over the 126 aircraft deal. So it is not surprising the former would choose a different partner this time round.

These explanations are not only undermined by Monsieur Hollande but also by the fact the CEO of Dassault, Eric Trappier, has said the joint venture with Reliance will manufacture parts for his Rafale plane.

But will they be for the planes bought by India or manufactured for other countries?

So, now, what does all of this add up to?

To my mind, the outcome is not just uncertainty, but confusion. There is no doubt serious questions have been raised, but, equally, we don't have clear answers. Unless you take sides, you probably don't know what to think.

Finally, when Shourie and Sinha call the NDA's Rafale deal 'a major scandal... by far larger than the ones that the country has had to contend with in the past', it is worth bearing in mind that so far there is no clear money trail nor an indisputable smoking gun.

But that doesn't mean there aren't disturbing questions and a strange resistance by the government to reveal the price, which only adds suspicion to concern.

And, now, the Hollande claim that Reliance was imposed on the French could amount to the Bharatiya Janata Party's Bofors moment.

It is a damning revelation and the government will find it difficult to counter.