'The frequency of vikas being used in speeches and slogans has reduced noticeably.
Why is the 'BJP's Chanakya' so aggressive and combative?' asks Utkarsh Mishra. 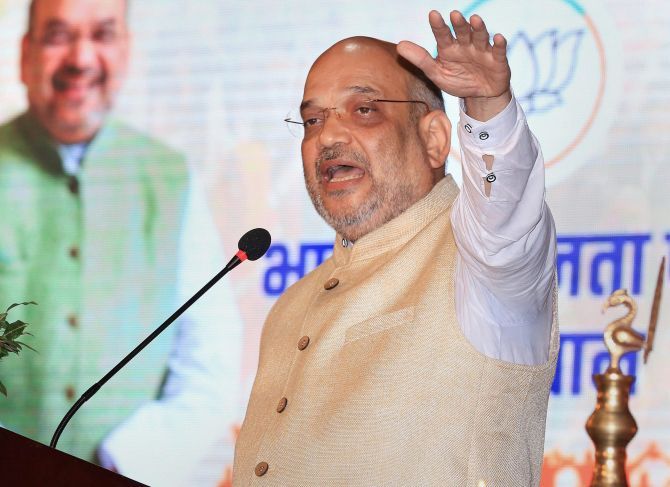 In George Orwell's classic Animal Farm, whenever discontent was sensed among the animals against the antagonist hog Napoleon, Squealer, Napoleon's spokesperson, would warn them that their disloyalty may result in the return of Mr Jones, the previous owner of the farm who was ousted by animal 'rebellion'.

Animals always found this argument unanswerable. Napoleon could be bad, but no one wanted Jones back for sure.

Do I want to draw any analogy by beginning the column with this reference? Of course not! Who would face the wrath of Napoleon's growling dogs by daring to draw such condescending parallels?

Instead, I intend to talk about Bharatiya Janata Party chief Amit Anilchandra Shah's addresses at the party's national executive, and later at a gathering of partymen in Jaipur, this month.

On both occasions, I found the saffron party's 'Chanakya' unusually combative and aggressive.

After the euphoria of May 2014, few would have imagined that five years later, the election campaign of the party promising 'Acchhe Din' will take such a turn.

In both these addresses by Shah, there was no mention of measures once touted as 'mega reforms' -- demonetisation, goods and services tax, etc.

The major portion of his speeches was dedicated to drive home the point that a leaderless 'grand alliance' of opposition parties is no match to the 'strong leadership' provided by Prime Minister Narendra Damodardas Modi and even the coming together of arch-rivals would not make a dent in the BJP vote bank.

Party workers were told to ask people whether they want Rahul Gandhi as prime minister, apparently in order to make them realise what lies ahead if they are contemplating a change.

Shah also tried to allay the apprehensions of party workers by stressing on the fact that the BJP was invincible. To do that, he resorted to an insensitive example, telling workers that the party could not be defeated even during the post-Dadri lynching uproar.

'Urban Naxals', 'infiltrators' set to be deported post completion of the NRC exercise in Assam and surgical strikes also found mention in Shah's address, telling the people who is the 'enemy' they should be wary of and who alone can deal with them.

The Congress and other Opposition parties were said to be defending and supporting those 'who want to assassinate a PM who is working for making India', clearly an attempt to establish that it is not a party they will be voting for, but national pride and honour.

Modi's slogan 'Ajeya Bharat, Atal BJP' is also an effort in the same direction, besides exploiting the name of the late Atal Bihari Vajpayee.

'India has won', he had declared after the 2014 mandate. With 'Ajey Bharat' or 'Invincible India' he again wants to indicate that 'India's victory' lies in 'Atal BJP' or a 'robust BJP'.

Surprisingly, the frequency of 'vikas' being used in speeches and slogans has reduced noticeably.

But why is the 'BJP's Chanakya' so aggressive and combative?

Time and again, he reassures BJP workers and the public, mostly in Rajasthan, that the party will win the Lok Sabha election with an even bigger mandate than it won in 2014; apparently advising them against going for a change at the state level.

The BJP's internal survey says the party will win 300 seats on its own this time. Shah has claimed the BJP will win all states it currently rules, and anti-incumbency in states not ruled by it will work in the party's favour.

Only he knows whether he is saying this because anti-incumbency is most visible in the BJP-ruled states of Rajasthan and Madhya Pradesh -- which go to the polls later this year -- or despite that.

Shah knows that the 2014 mandate for the BJP included a clean sweep in Rajasthan and Gujarat and a near clean sweep in Uttar Pradesh and Madhya Pradesh.

A repeat of this performance seems very difficult this time.

A tie-up between the Samajwadi Party and the Bahujan Samaj Party has already cost the BJP two of its bastions in UP -- including its chief minister's Gorakhpur Lok Sabha constituency.

The BJP's attempts to get a lion's share of seats in Bihar has already soured its relationship with allies in the state.

In Maharashtra, the Shiv Sena has decided not to contest the 2019 election with the BJP. The saffron party has also lost a major ally in the Telugu Desam Party.

Pinning hopes of getting a mandate larger than 2014 on gains made in the north eastern states and Odisha is quite fantastic.

Moreover, Dalit and farmer movements in the country are on the rise, supported by the Opposition parties.

The government's efforts to assuage Dalit anger have met with hostility by the BJP's upper caste vote bank.

'Bharat bandhs' called on various issues by upper caste organisations, Opposition parties and Dalit groups have been most successful in Madhya Pradesh, indicating how unpopular the Shivraj Singh Chouhan government has become.

Shah is very well aware of these facts.

And hence he understands the need to enthuse party cadres who may confront tough questions from voters about the state of the economy or the party's unkept promises.

It is important for him to continuously denigrate the Opposition, branding them as obstacles in the path of making a better India and linking them with ideologies touted as being against the country.

It is also important to stress on the vastness the BJP has acquired in the past five years, to show how the party has entrenched itself in the country's governance and it 'cannot be dislodged for at least 50 years'; to strongly react to and silence every voice of dissent; to rebut every news or information critical of the government or party's top leadership; to deny any wrongdoing and refusing to take any responsibility for things gone wrong.

Any admission by the government or the BJP about the failure of policies like demonetisation, rising agrarian distress and the poor shape of the economy will only provide ammunition to the Opposition parties.

Therefore, the bluster and bombast are necessary to prevent any loss of votes. To keep up the momentum, the party has also decided to continue with Shah as chief till the 2019 election, deferring the organisational presidential election.

Consequently, this makes one wonder if Shah's extra combativeness and aggression is more a sign of nervousness than confidence.

That said, his ability to spring surprises cannot be discounted.