Is the Supreme Court immune?

By T V R Shenoy
February 16, 2011 14:02 IST
We must hope that reports of wrongdoing once again lead to corrective action, with the Supreme Court setting the example, says T V R Shenoy.

April 28, 1976 was the day the Indian judicial system hit rock bottom. That was when the Supreme Court, by a four to one majority, essentially overthrew its own role as protector of fundamental rights in the famous -- or infamous -- case of ADM Jabalpur v Shivakant Shukla.

Compared to that self-inflicted wound what are a few allegations of wrongdoing in the judiciary, right?

Wrong. A gaping wound is always treated quicker than a creeping cancer.

The 'ADM Jabalpur' judgment was such a monumental mistake and raised such disquiet that steps were taken to restore judicial integrity and independence as quickly as feasible. Allegations of corruption draw more muted reactions, even 'What are a few lakhs compared to the 2G Scam?'

Can we afford to let the excesses of other sections of the Establishment become a shield for some -- thankfully few -- on the Bench?

There have been rumours of wrongdoing in some of the lower courts, even the high courts, for quite a while. In November last year the Supreme Court itself remarked that there was something 'rotten' in the Allahabad high court. (Probably stronger language than most Indians would dare use!) But there is some reason for those harsh words.

Back in January -- in the same column when I first mentioned the cheque trail connecting the upper echelons of the DMK to the 2G Scam -- I wrote about a rumoured case of judicial corruption. Some details of that case too are now emerging.

Very briefly, a certain industrialist -- reportedly from Kanpur -- came under the Enforcement Directorate's scanner. The tax authorities suspected him of collusion with a senior bureaucrat to whom he is related. (Their wives are sisters.) When the industrialist's telephone lines were tapped quite a different case came to light.

A lawyer was heard telling the industrialist that a certain high court judge would deliver a favourable judgment and mentioning a very large sum of money that was to change hands. It seems that this lawyer was himself the son of a former Chief Justice of India.

As with the DMK-DB Realty tangle it seems to be only a matter of time before everything comes out into broad daylight.

Something that has already emerged into the open is the 'Provident Fund Scam' in Ghaziabad, Uttar Pradesh, where six former judges have been threatened with non-bailable arrest warrants. Succinctly, a treasury officer named Ashutosh Asthana withdrew Rs 65,857,892 from provident funds by misusing accounts of the local court's Class-III and Class-IV employees. Asthana gave a sworn statement before a magistrate with details of who approved documents with forged signatures.

The whole thing is a royal mess. The worst part is that Asthana died while in custody, leading to further rumours.

We also know that a three-member committee chaired by Justice B Sudershan Reddy concluded that Justice Soumitra Sen of the Calcutta high court misappropriated several lakh rupees. Though this took place before he was elevated to the Bench, the report has been placed before Parliament, and further action is indicated.

But how far up has the rot spread? Is at least the Supreme Court immune?

The answer, according to the former Union law minister Shanti Bhushan, is 'No.' The senior counsel has reportedly told the Supreme Court that at least eight of the last 16 Chief Justices of India were corrupt. (Six, he said, were definitely honest, and he did not know enough about the last two to offer a definite opinion one way or the other.)

It has been reported that Shanti Bhushan submitted the names of the eight in a sealed envelope to the Supreme Court.

Now, K Sudhakaran, the Lok Sabha MP from Kannur, has publicly claimed that he was a witness when a sitting judge on the Supreme Court accepted a Rs 21 lakh (Rs 2 million) bribe to revoke a Kerala high court verdict cancelling the bar licences of 21 bar owners. The MP added that the same judge later asked for a further Rs 15 lakh (Rs 1.5 million).

Sudhakaran has refused thus far to name the judge in question. But it should not be too difficult to narrow it down since the Kannur MP also said that he kept quiet because a Bench that included that same judge was to hear an election petition against the election of CPI-M candidate O Bharathan from the Edakkad assembly seat.

It is not the only peculiar tale by a politician from Kerala that cries out for an enquiry. In a sting operation by a television channel K A Rauf, brother-in-law of Muslim League leader P K Kunhallikuty, claimed that two high court judges had been bribed to obtain a favourable verdict in the so-called 'Ice Cream Parlour Case.'

This unsavoury tale of an ice cream parlour in Kozhikode that allegedly served as a cover for prostitution led to Kunhalikutty's resignation as Kerala's industry minister in 2005. The Kerala Bar Council has demanded a proper inquest.

Finally, there have been media reports of family members of more than one Chief Justice of India taking advantage of the relationship. In the case of Justice K G Balakrishnan these have reached the stage where Justice J S Verma (himself a former Chief Justice) and Justice V R Krishna Iyer (once on the Supreme Court) have openly said that he should step down as chairman of the National Human Rights Commission.

Incidentally, the post of chairman of the NHRC was vacant for about a year, following the retirement of Justice Rajendra Babu. Why was it not offered to Justice Y K Sabharwal? (The Protection of Human Rights Act, 1993 specifies that the chairman of the NHRC must be a retired Chief Justice of India.)

From Kochi to Kanpur to Kolkata there are just too far too many tales of wrongdoing. Parliamentary proceedings seem inevitable in the case of Justice Soumitra Sen, but, speaking for myself, I would prefer to see the judiciary itself assume the initiative in taking action in other cases.

The case of Justice P D Dinakaran was probably not the right way to go about it. After a Supreme Court collegium announced that he -- then the chief justice of the Karnataka high court -- would be elevated to the apex court, allegations of land-grabbing hit the headlines. The Supreme Court then asked him to go on leave, before he was transferred to the Sikkim high court.

The net result was that Justice Dinakaran could never prove his innocence nor could his detractors prove their charges.

The Constitution lays out a laborious process for removing a judge, deliberately so because it must never be done on a political whim. History shows that no Supreme Court or high court judge has ever lost office in such fashion. The best defence against judicial misbehaviour, to use the American term, is 'peer pressure.'

The one benefit to emerge from the 'ADM Jabalpur' case was that the backlash led to some soul-searching on the Bench, encouraging judges to assume a more independent and active role in public life. We must hope that reports of wrongdoing once again lead to corrective action, with the Supreme Court setting the example.

Peer pressure is better than political pressure acting under the guise of popular pressure. 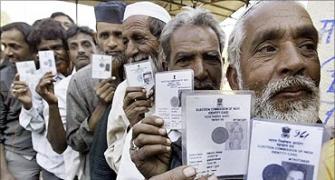 India among the world's most corrupt nations!
Greed is good; excessive greed even better

We know who is honest, who is corrupt: SC