'An ardent advocate of nuclear disarmament, Obama may even be secretly heaving a sigh of relief that the NSG is unlikely to reach unanimity of opinion on India's candidature,' says Ambassador M K Bhadrakumar. 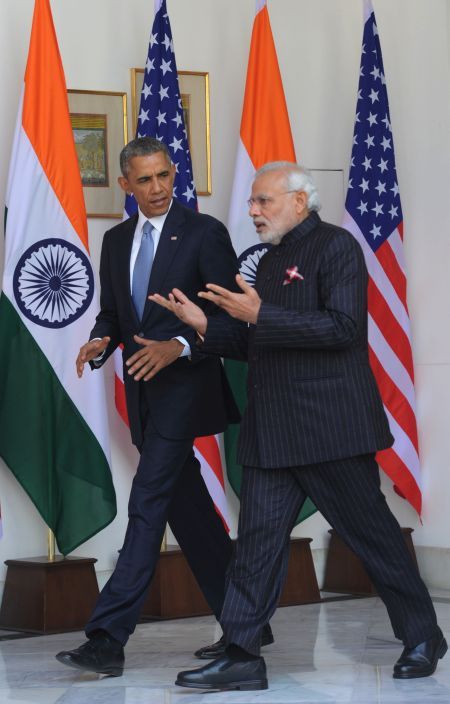 IMAGE: US President Barack Obama and Prime Minister Narendra Modi hold talks at Hyderabad House, January 25, 2015, on a day when it was announced that India and the US had sealed a landmark civil nuclear deal. Photograph: MEA/Flickr

The folks in the Ministry of External Affairs have traditionally had a very poor opinion bordering on contempt toward Indian media persons covering the foreign-policy 'beat'.

They thought of them as innocents abroad with little grasp of diplomacy and international affairs -- and even less intellectual curiosity. The result is that spin doctors have had a whale of a time, tying our cub reporters (and even editors) in knots.

However, Foreign Secretary S Jaishankar's media remarks on Friday, June 3, regarding India's candidacy for membership of the Nuclear Suppliers Group, NSG, sets a new record. Let me quote some passages:

'The NSG is a regime. It is a sort of a flexible arrangement amongst States which is quite different from the NPT which is a treaty. If you look at the central word in that acronym NSG, it is "supplier". If you look there, it is proliferation.'

'So, I think the objectives are different and I would not really confuse apples for oranges... So, our view is, do not confuse the NSG and the NPT. They are two somewhat different things.'

'The merits of our joining NSG derive from the fact that we have a substantial expansion of our nuclear energy segment ahead of us..\'

'I would also flag to your attention that the NSG has already made one exception for us. So, in a sense, our credentials have been examined; a judgement was arrived at in 2008; in 2008 we gave some commitments.'

'We gave commitments on separation of our nuclear programme between civil and the strategic side. We agreed to accept and implement the additional protocol. And if you look at all the commitments we made in 2008, we have very faithfully followed up. So, we think it is a sort of logical next phase.'

Really? What the FS didn't say are the following: One, the NSG's creation in 1975 was an American initiative in response to the Indian nuclear test in May the previous year. Its cardinal objective was to coerce India to join the NPT.

Its business is to limit the export of nuclear equipment, materials or technology to India. The Zangger List ('Trigger List') drawn up in 1978 and subsequently revised in 1992 as the 'Dual-use List' specifies the items that come under the embargo.

Two, the NSG is not in the least concerned with the issue of India's power deficit (or the facts of life in India such as our drought and famine or infant mortality rate and illiteracy.)

Three, the NSG waiver for the US-India 123 Agreement was conditional. The waiver was obtained, thanks to the George W Bush administration (which was enamoured of the prospect of highly lucrative arms deals and nuclear commerce with India) putting its weight behind it -- but, even then, only after extracting a series of concessions out of India.

The pressure on signing the so-called 'foundational agreements' (which are a hot issue even today) can be traced to that period too.

All the same, the NSG waiver, when it came, still provides for periodic NSG review. Besides, the waiver insisted on India agreeing to uphold the NPT regime. Furthermore, the NSG also ensured that India will be bound by the NSG guidelines and any future modifications of the Guidelines, while not being a part of the NSG.

Suffice it to say, India's only right will be to be consulted by the chair of the NSG.

Put differently, the NSG is a nuclear suppliers' cartel and, in principle, it can change its waiver for India at any time it chooses. India will be expected to keep its pledge of moratorium on nuclear tests; India's 'performance' will be subject to periodical scrutiny; and, there is no guarantee of transfer of enrichment and reprocessing technology to India.

President Pranab Mukherjee will be the best person to explain why the UPA government accepted all these stringent conditions -- and to what end.

Therefore, the Chinese foreign ministry statement of June 4 in Beijing is spot on:

'The international community has forged consensus long ago that this (NSG) regime is rooted upon the Treaty on the Non-Proliferation of Nuclear Weapons, or NPT, which was reaffirmed in the New York NPT review session held in the mid of last year. This is exactly why the NSG has always made the "NPT signatory status" a prerequisite to accept new members.' (Press Trust of India)

The crux of the matter is that India needs to climb the NSG mountain on its own and the US is unwilling or incapable (or both) of being anything more than a 'sherpa'.

An ardent advocate of nuclear disarmament, President Barack Obama (who had, incidentally, disfavoured as a senator the signing of the US-India nuclear deal), may even be secretly heaving a sigh of relief that the NSG is unlikely to reach unanimity of opinion on India's candidature.

The point is, India finds itself in a pitiable situation today and the proponents of the nuclear deal don't know where to go and hide. If one were to dip into the archives and read some of those absurd columns regrading the negotiations over the 2008 nuclear deal, written by our pundits, one feels like sitting on the ground and crying as to what a pedestrian strategic community lacking integrity our great nation is been saddled with in critical times.

Therefore, it must come as natural justice that on the very same day Prime Minister Narendra Modi is due to land in Washington, The New York Times, the venerable American newspaper of the foreign policy establishment has featured an extraordinary editorial on this topic entitled, 'No Exceptions for a Nuclear India.'

It says effectively that India does not merit NSG membership 'until the country meets the group's standards,' which, of course, implies that India should 'legally binding commitments to pursue disarmament negotiations, halt the production of fissile material for nuclear weapons and not test nuclear weapons.'

The New York Times editorial cautions against the NSG setting a bad precedent by admitting India, but excluding Pakistan (or North Korea). Furthermore, it concurs with the consistent Pakistani stance that India's NSG membership impacts the regional strategic balance.