'The Modi government will do well to thrash out a national consensus before taking the leap and put itself in America's pouch,' says Rajeev Sharma. 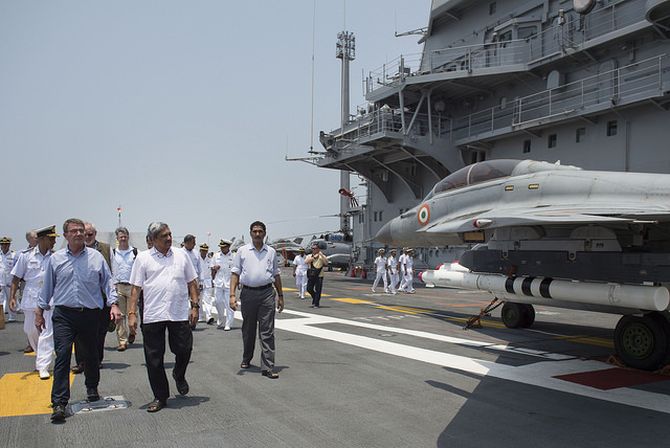 The Narendra Modi government may well be playing with fire in pursuing a policy of great American embrace, which seeks to turn the Manmohan Singh government's decade-long foreign policy on its head.

At their bilateral meeting in New Delhi on April 12, Defence Minister Manohar Parrikar and United States Defence Secretary Ashton Carter decided in principle to negotiate and sign the Logistics Support Agreement or LSA to provide logistical support, fuel supplies to each others' militaries from respective bases in India and the US.

This raises the spectre of not only infuriating a key friendly country like Russia, but also a giant neighbour like China with which India boasts of having a strategic partnership.

Besides, powers like Iran and other Muslim countries would have their own issues resulting from the Modi government's American embrace.

In the coming days, the Modi government will have a lot of explaining to do as India engages directly with Iran, Russia and China.

At least three top officials of the Modi government are set to engage with these three powers in coming days. Inevitably, the US will be the elephant in the room in all these discussions.

External Affairs Minister Sushma Swaraj is in Iran and scheduled to have substantive talks with the Iranian interlocutors April 17. From Tehran, she travels to Moscow where on April 18 she is scheduled to meet her counterparts from Russia and China under the rubric of RIC (Russia, India and China).

Defence Minister Parrikar is in China on his maiden visit and will meet his Chinese interlocutors on April 17-18.

Immediately after Parrikar departs from China, National Security Adviser Ajit Doval will be in China. His meetings with top Chinese officials are scheduled for April 21-22.

All three Indian officials -- Swaraj, Parrikar and Doval -- are expected to be swamped by questions on the Modi government's strategic shift towards the US. It will be hard for the trio to satisfy their hosts, particularly Russia and China.

The Congress party has already noted that the Modi government does not have the mandate to push the country towards a military alliance with the US. This raises the domestic challenges for the Modi government as the previous government had consistently warded off American pressure to sign the LSA since 2004.

'Though, America is India's strategic partner and there is an ongoing defence cooperation we have strong reservations and concerns over this development,' Congress leader and former Union minister Anand Sharma said.

'Prime Minister Narendra Modi and his government do not have a national mandate to push India into a situation in closer, deeper, military alliance and become part of the larger operational designs and requirements of the US in Asia, in the Pacific and the South China Sea,' Sharma added.

'It would be detrimental to India's strategic interests, our security interest and also undermine or rather underrate the critical geo-strategic balance and also the balance for forces in India's extended neighbourhood in the region,' Sharma -- who served as minister of state for external affairs during Dr Singh's first term in office -- said.

'When you have such an agreement put in place, it will also require, though the government may deny, the presence of support personnel for maintenance and repair in India's military bases and that will further be taking a step towards a formal military alliance,' Sharma pointed out.

'We have also concerns that it will be, in fact, inviting opposition and serious concerns of India's strategic partners -- Russia and even China.'

Throughout its decade-long rule, Dr Singh's government had resisted the LSA and two other concomitant pacts -- CISMOA or the Communication and Information Security MOA and the BECA or Basic Exchange and Cooperation Agreement.

Dr Singh's government saw these agreements as intrusive which would be construed or misconstrued by India's other strategic partners as India being drawn into a military alliance with the US.

The Congress party's concerns are that the CISMOA would take into its embrace the complete communication network of the Indian armed forces, its radar and other communication signals including that of the Indian Air Force and the Indian Navy which can jeopardise India's operational preparedness and strategies.

The Modi government has said it wants to have the LSA on a case-to-case basis and formal arrangements already exist between India-the USA, India-Russia and our other partners when there is a specific requirement. The The Congress party has raised an important question. asks why then is there a need for a formal agreement with the US?

Since the LSA is not a done deal yet and not something cast in stone just as yet, the Modi government will do well to thrash out a national consensus before taking the leap and put itself in America's pouch.