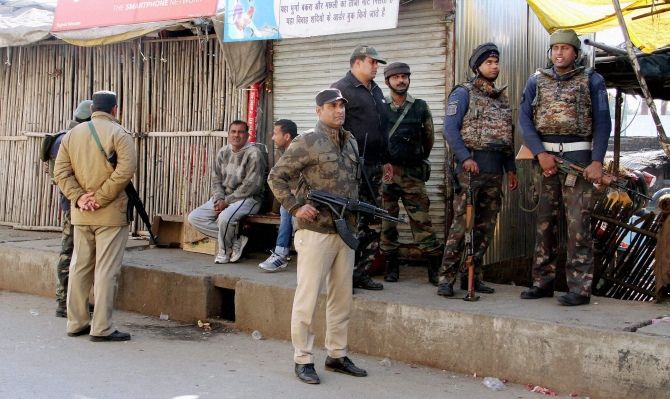 The Government of India surprised observers everywhere with the Bangkok talks between the national security advisers of India and Pakistan and External Affairs Minister Sushma Swaraj's successful Islamabad visit. The oft repeated question in December 2015 on all lips was about the length of time it would take for the anti-India lobby in Pakistan to derail the talks.

When Prime Minister Narendra Modi again surprised the nation and the world with his pathbreaking impromptu visit to Lahore on December 25 he was adding to the cementing process of the peace talks, bringing informality to the fore.

With foreign secretary talks scheduled as early as January 15, India's quick fire decisions were obviously a source of acute discomfort for those completely opposed to Pakistan's peace efforts with India.

To state that a terror strike was unexpected would therefore be shorn of truth. However, where it would be one could only fathom a guess.

That the Deep State of Pakistan, which is the prime opposition to any overtures towards India, to perpetuate its own position and presence, chose Pathankot as its target and that too the air force station is not difficult to understand.

In the quick time that results were desired there was no question of a major terror operation deep inside India through sleeper agents. That is the level of dominance that Indian intelligence agencies have been able to achieve.

It had to be an infiltration-based operation, close to the Line of Control/International Border, sufficiently large in scope and on a high profile target. The Pathankot AF station fitted the bill.

A terrain and situation study will reveal that the Kashmir Valley offers little scope for such an operation today, the hill sector of Jammu division has very few worthwhile targets and Jammu city and its vicinity is well secured with the experience of the past 18 months.

The ground around the Ravi river and the forest tracts towards the Himachal Pradesh and Jammu border offer excellent cover for establishing bases and then attempting the operation.

The AF station has assets, which if struck, would make a major impact on the lines the Tehreek-e-Taliban Pakistan did at Peshawar not too long ago.

The Deep State's experience cannot be matched in the sphere of different terror operations.

Details of the operation are unnecessary; perhaps suffice to state that after discovery of the terror group on January 1, post the hijack of the superintendent of police's car the strike could not be prevented (it should have been, given our experience in handling such threats) but damage control could be ensured.

The terrorists could not penetrate the area of the main assets and that was ensured by some courageous action by soldiers and airmen with loss of precious lives.

For detractors of the Indian Armed Forces I may highlight that searching for six men who wish to avoid contact in such terrain as the one around Pathankot isn't exactly a cakewalk. That the main assets were protected from damage prevented this event becoming larger than it could have been is not a bad achievement.

The politico-diplomatic fallout of the event is the other important aspect. The questions which should be asked: First, could the Pakistani leadership have prevented this; second, should the Indian government continue with the peace process or abandon it; and third, what does the future hold?

The stakes for Pakistan in maintaining its support to the peace process are indeed high. For long it has been considered the core centre of sponsored radical terror. The Paris attacks may have been perpetrated by Da'esh, but Pakistan continues to be in focus as the alternate centre of radical ideology.

International consensus is far stronger to act against radical groups than ever before. Thus, for Pakistan to continue playing 'bad terrorist and good terrorist' games should be getting more difficult.

Perhaps it is so under this pressure of the international environment and some targeted leaning by the Americans. Pakistan possibly realised that time was running out and before long international action against it could well be on the cards. A pro-peace lobby perhaps worked its way through with support of the army chief.

The presence of Pakistan's NSA (Lieutenant General Naseer Khan Janjua) lent weight to the argument that the Pakistan army was supporting the rapprochement. However, that there is deep opposition to any peace with India is also well known and many in the establishment itself would want to see the failure of this.

The Pakistan army will need to do a somersault to admit anything at all. That the hands of many from within its establishment are behind the Pathankot strike cannot be doubted.

India must continue harping on that as well as on the 'stab in the back', a replica of events after then prime minister Atal Bihari Vajpayee's Lahore yatra.

The international community must be fully sensitised to that and repeatedly because the environment is against radicals and terrorists. This act must get Pakistan an international rap and a hard one at that.

The response from India will need deft political handling and some tough diplomacy. Prime Minister Modi's efforts towards peace have been deliberate and after careful consideration. The leadership would have anticipated that there will be obstacles along the way, such as these acts. It would have been discussed with the Pakistan leadership too.

One of my recommendations after the PM's Lahore visit was that very early we need to do joint contingency planning for exactly such contingencies. Possibly, it would have found place at the foreign secretary talks, but the events at Pathankot have overtaken it.

If the peace process has to be secured, then the aspects of joint handling need to be incorporated. Surprisingly, we have seen a muted response from Pakistan so far. If the intent is good, the visibility in condemnation and reassurance should have been much more vocal. The usual commentators from Pakistan are less gung ho, but admission of fault is obviously not up their street.

Judging from social media inputs that I monitor, it is my perception that the Indian public is extremely resentful, but yet is willing to give the PM and his team the support they need. The strength of conviction that the PM has been able to raise from the string of positive events appears to be bearing out the negativity created by the attempt to derail the process.

Had the damage at the AF station extended to the aircraft at the hangars and other equipment and if there were visuals of large-scale destruction it would have been difficult to sustain the peace process.

If the decision by the Government of India is to continue the peace process as seems likely thus far, I strongly recommend that talks between the NSAs should be immediately set up at another neutral location if necessary.

There is reluctance once again by some Pakistani commentators to even admit that there is an establishment hand behind this. The old and ever new argument that these are non-State actors and Pakistan has little control over them cannot be allowed to persist all over again.

If that stand is taken by the Pakistan NSA too, then it is time to call off the talks. Our emphasis on bilateralism sometimes plays against our ability to expose Pakistan internationally. While talks are bilateral, the issue of terror has larger connotations and should not detract us from continuous naming and shaming.

That a positive moment can convert to negative is not something unusual in the context of India and Pakistan. We have seen this happen too often as has Pakistan and its establishment may just have taken things for granted.

India needs to be circumspect about this and deeply introspect on its interests and costs of pursuing peace with Pakistan.

The time for realism is now.

Lieutenant General Syed Ata Hasnain (retd) is a former General Officer Commanding of the Srinagar-based 15 Corps, now associated as a senior analyst with the Vivekanand International Foundation and the Delhi Policy Group.