Trump's foreign policy juggernaut has shelved the 'Deep State' and 'Axis of Evil'. But where is India, asks Rajeev Srinivasan.
Illustration: Uttam Ghosh/Rediff.com 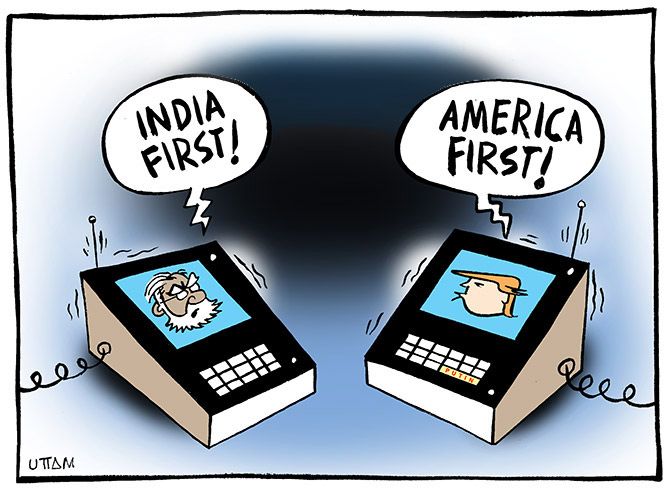 I suggested a couple of years ago that the American #DeepState had invented a new Axis of Evil, a trio of enemies: Putin, Abe and Modi, in an updated version of the earlier axis of evil which was Iran, Iraq and North Korea.

It certainly looked like the Obama administration was doing its damnedest to harass and intimidate all three: Encouraging Georgian and Ukrainian aggression towards Russia, humiliating Modi for a dozen years with a supercilious visa ban, and bullying Japan when it attempted to rid itself of the outdated pacifist Article 9 in its United States-imposed constitution.

It was only to be expected that President Trump would reverse this stance, because he and his close aides such as Steve Bannon stressed repeatedly that America's foes were, instead, China and Islamist terrorism.

And sure enough, a month into his term, Trump and his main aides have shown that they are positive towards Russia; and Shinzo Abe's recent visit to Trump's ranch in Florida apparently ended with smiles all around.

So, if my theory is correct, the next outreach should be to India, the remaining member of the Axis.

Unfortunately, India seems to be taking a decidedly cool approach to Trump, sort of a wait and see. Perhaps it is because of the trauma of demonetisation followed by the preoccupation with state elections.

However, I am concerned about the plausible alternative: That Modi is trying to curry favor with the Leftie 'intellectuals' and media who -- blindly following in the footsteps of their American counterparts -- simply loathe Trump.

If that is the case, then India is letting a foreign policy opportunity slip through its fingers while the more alert are quickly getting their cards on the table.

As I write this, Israeli Prime Minister Binyamin Netanyahu is about to arrive in the US, and the noises from the Trump administration have been decidedly friendly. (Compare to Obama's parting shots: He abstained in the Security Council in a resolution condemning Israel, and pretty much his very last act in office was to allocate $122 million to the Palestinians.)

If Trump is indeed worried about China and Islamist terrorism, then India is one of the parties most affected by both.

Further, Pakistan, which has had a bit of a riot act read to it apparently by the Trump cabinet, is clearly another factor that should draw the US and India closer.

But there has apparently been little initiative on the part of the Indian foreign affairs mandarins to present the case: Perhaps they have been sidetracked by the H1-B issue, too.

I do wish they'd get their act in gear, or risk being deemed irrelevant in the Trump world-view.

Besides, the #DeepState is only bending, but it is not beaten.

They are fighting back because they have the intelligence establishment as well as much of the bureaucracy on their side.

The spectacular setback to Trump due to the resignation of his national security advisor General Mike Flynn on the very question of covert ties to Russia shows this.

The fond hopes expressed by some in the media that a path is now open to impeach Trump on the same issue shows how they will fight back.

There is reason to believe that Trump is involved in a Huntingtonian clash of civilisations, wherein the Russians, as fellow-white-Christians, must naturally be an ally to the West, as contrasted with Muslims and Chinese.

This may explain part of his eagerness to arrive at a détente with Russia, lest it be tempted to move further into the Chinese dhritarashtra alinganam.

In China's case, too, Trump's perspective has been ups and downs.

The bonhomie shown by Trump towards Abe, and his ringing declaration that the US would stand by Japan over, for example, the Senkakus, which the Chinese are nibbling at, was, for all intents and purposes, an unambiguous statement of support.

On the other hand, there was disappointment as well.

There was a good start wherein Trump's phone call with the president of Taiwan suggested that he was not particularly bothered about China's easily ruffled feathers, or their political theatre.

It is not even clear why anybody should be that bothered -- other than China -- whether there was 'One China' or three.

I read in the Financial Times that this is standard Chinese strategy: Declare something is non-negotiable, and repeat it until everybody else falls in line. And Trump, to begin with, did act like he got this.

Thus, the consternation over the abrupt U-turn after a call with Chinese strongman Xi.

Why is Trump toeing the Chinese line?

What was the quid pro quo?

Or did Trump just wake up and smell the roses and wonder if China is just too big to beat?

Before that happens, and Trump attempts (of course, it will be futile) to accommodate China, it is important for India to get its act in gear and reach out to Trump.

India offers a lot in terms of containing China, its geostrategic position dominating the Indian Ocean, and its front-line status in the war on terror.

The recent publication of an absurdly Hinduphobic report by a Pakistani working for the USCIRF, a quasi-governmental body that is mostly concerned about large-scale conversion of Hindus and others, is an indicator of the fact that the beast has been defanged, but is by no means dead.

A large Trump constituency, Southern rednecks, may be highly supportive of the execrable USCIRF.