'Flypasts, bands, helicopters dropping flowers over hospitals treating coronavirus patients are cute ideas for an Akshay Kumar film.'
'But when lakhs of workers at the lowest rung of the employment ladder would still be walking back home, this is the true 2020 equivalent of 'let them eat cake,' notes Shekhar Gupta. 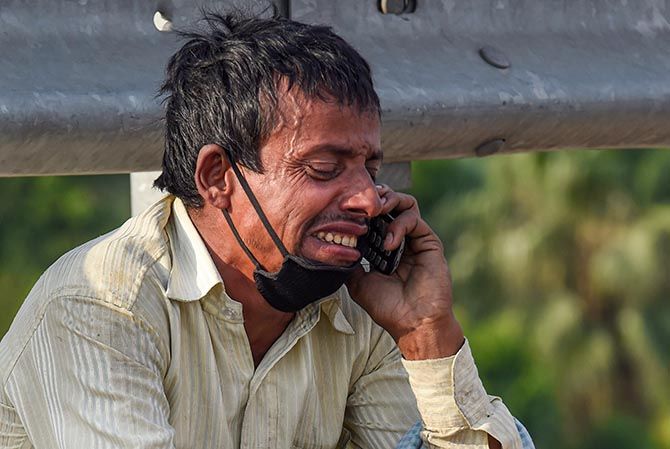 IMAGE: An image that should shame all of India. An Indian weeps as he speaks to a family member at Nizamuddin bridge in New Delhi, May 11, 2020. Photograph: Atul Yadav/PTI Photo

Just how successful has the lockdown been?

Just how bad would the situation have been if it wasn't this total?

How can you take a chance in a country of 1.38 billion, mostly poor, people?

We have the lowest per million fatality rate from coronavirus for any major country.

Therefore, thank your chosen God, so far, so good. And get back indoors. Really?

We are managing to stay alive, but our livelihoods are in deep freeze.

For far too many fellow Indians these won't return any time soon.

Tens of crores who've been lifted out of poverty post-1991 are half a wheezing breath away from slipping back there.

We are alive of course, but remember the famous words of Amitabh Bachchan in the 1979 hit Mr Natwarlal, 'Yeh jeena bhi koyi jeena hai lallu?'

Or let me set the Hindi cinema calendar back five decades instead and offer you a more prosaic description, if with the help of fine poetry.

The late Gopaldas Neeraj (1925-2018) is remembered mostly as a poet of deep melancholia.

But his imprimatur for poetic immortality comes from his saddest: Karwan guzar gaya, gubaar dekhte rahe... (the caravan passed me by and I was left staring at the dust-clouds in its wake).

Sung by Mohammed Rafi and composed by Roshan in the 1966 Tanuja-starrer Nai Umar ki Nai Fasal, it was the ultimate song of self-pity for the jilted, defeated lover.

It was so sad that it lent itself naturally to becoming the most parodied of our early school years.

The refrain, in the publishable parody version, changed to: Mar gaya mareez hum bukhar dekhte rahe (all I did was keep checking the temperature, but the patient died).

I understand the connection between fever-checking and coronavirus and the risk of being accused of trivialising a once-in-a-century tragedy.

But continuing on, unthinkingly, with more or less the same lockdown amounts to exactly this.

If the virus won't kill us, joblessness, hunger, desolation, depression, loss of self-esteem will.

A quarantine shouldn't become a death-bed.

As the government's latest decisions show, this is not about to change soon.

Check out the history of any state or establishment. Absolute power can also intoxicate you absolutely. 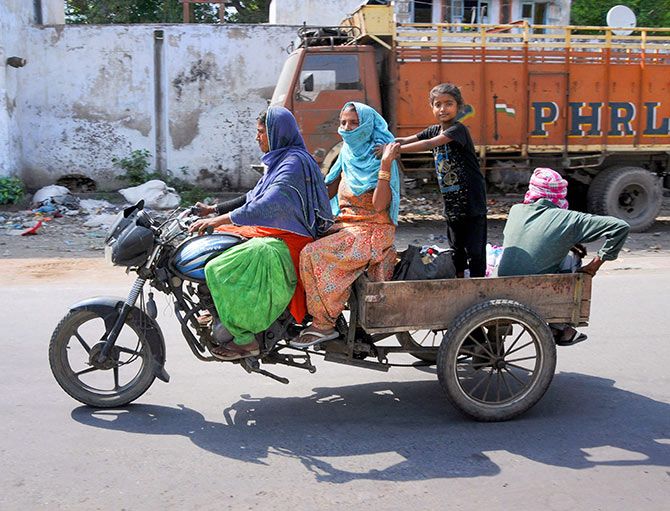 IMAGE: A family makes its way home on a modified cart in Amritsar, May 9, 2020. Photograph: PTI Photo

That is why the central government is now micromanaging not just the affairs of all the states, but also the day-to-day lives of us individuals.

Added with such total power over people, you can only expect many bureaucrats to start behaving like mini Robert Mugabes.

Check out Haryana. A senior cop announced on camera the district's borders were closed for everyone, including journalists (never mind) and doctors.

Hello, the state has proudly built something called the Medicity, where several large hospitals function.

Hundreds of patients, doctors and paramedics commute here from Delhi.

It is one thing that a state is nutty enough to be locking up a district with pretensions to being India's third Silicon Valley.

But it is also a zone both Delhi and Rajasthan need for transit.

You think this is absurd enough as an example of absolute power driving the establishment nuts? Read the story by ThePrint reporter Jyoti Yadav on how the state is digging up decent roads (external link) on the borders to keep coronavirus in Delhi.

India may not have the cash or the fiscal headroom to print money -- unlike the US, blessed with the world's reserve currency -- to spend its way out of a crisis.

But it has an Army, Navy and Air Force, to shore up your spirits as we will see soon.

But when lakhs of workers at the lowest rung of the employment ladder would still be walking back home, this is the true 2020 equivalent of 'let them eat cake'.

What they need, on the other hand, is a more purposeful reopening and a reassurance that their jobs are not only not going away, but resuming soon and they are needed.

Flypasts as if to celebrate this mass exodus are, I am afraid, an obscenity. 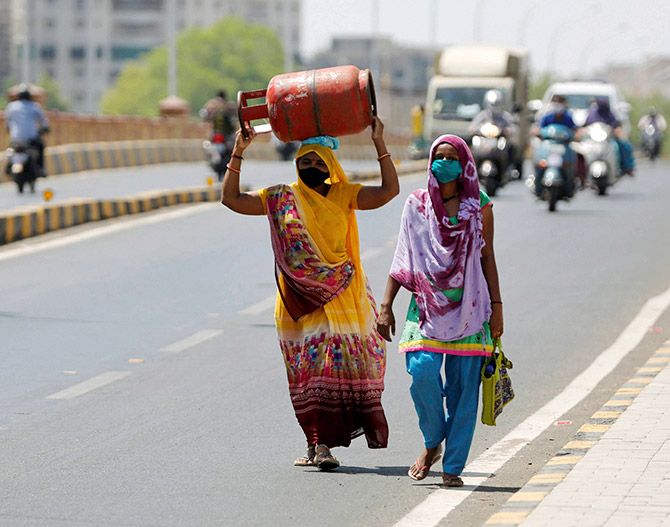 IMAGE: A woman carries a cooking gas cylinder on her head in Ahmedabad, May 9, 2020. Photograph: PTI Photo

During the Vietnam war, the press corps had given the daily US military briefings a name: Five O'Clock Follies.

Such a thing happens when an establishment begins to see its people as infants.

Watch the daily Ministry of Health briefings in New Delhi, supposedly giving an overview of the COVID-19 situation in the country.

These are so anodyne, so monotonous, and so shy of taking any questions that you could pretty much name these as Four O'Clock Follies.

Out of sheer exasperation at the lack of information I even landed up at one of these the other day, attending a PIB briefing after a couple of decades, if not longer.

I did also ask a question: "Of all the active cases now, how many are on ventilator?" The lone scientist/doctor there didn't answer this, a civil servant did.

Something like, the percentage of people in serious condition is routinely stated by the ICMR/health authorities.

Or something to that effect. No follow-up, no nothing. Just a restatement of the familiar old bureaucratic tactics: "I won't ever lie to you. But if you ask me my name, I shall give you my date of birth." 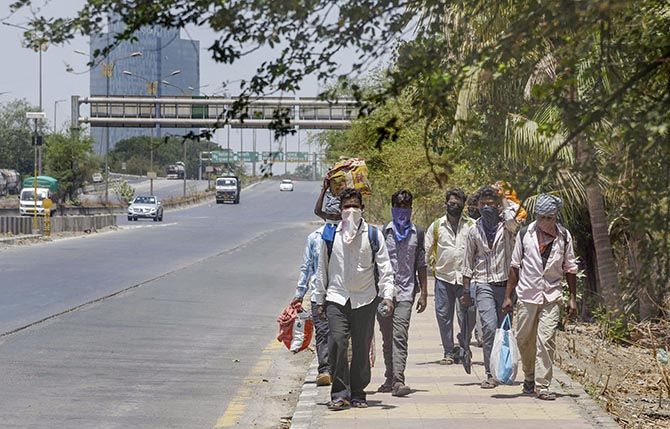 IMAGE: Migrants from Madhya Pradesh walk towards their villages in Navi Mumbai, May 6, 2020. Photograph: PTI Photo

Three months after the first COVID-19 case was reported in India, we need more than a daily scoreboard.

That can be simply tweeted by someone at a fixed time in a day.

Nor do we deserve daily instructions, dos and don'ts and then clarifications.

One has already landed (on liquor sale) even as this is being written, confirming the truism: Never believe anything from this government until it's been clarified.

We need to see the road ahead, a road to some kind of normalcy.

Or, we will end up a nation of beggars, waiting for sarkari orders and mai-baap handouts for survival.

We are getting deluded by how inspirationally compliant Indians are with this unthinking, one-size-fits-all, lockdown that would do Tughlaq proud.

The reason we are so compliant is that we are so fearful.

This nation of 1.38 billion people, hailed globally for being so aspirational and entrepreneurial, is now sitting in the trenches grateful it is still not dead.

We know that there is a valid concept of putting a grievously ill patient under a medically induced coma, to allow the body to recover.

But you need to lift it as early as possible.

If you let her go on in coma, and pat your own back each time you check the temperature, you risk falling into the syndrome we parodied poet Neeraj about: Kept checking for fever while the patient died.