One third of all Indians live in one room. Another one third lives in 2 rooms.
They cannot self quarantine or isolate and if infected they will pass it on to others.
It is impossible for India to control an epidemic, notes Aakar Patel. 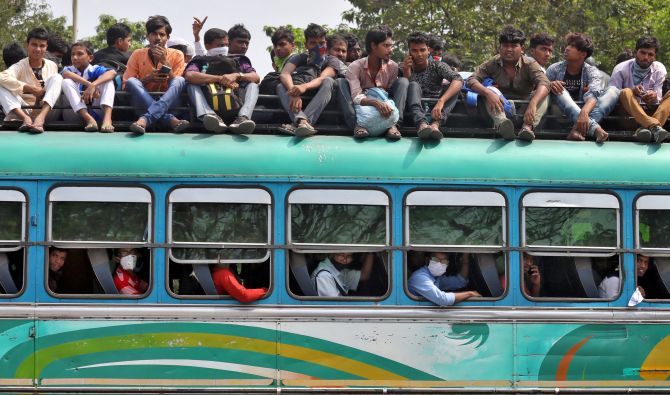 IMAGE: People travel in a crowded bus in Kolkata, March 23, 2020, to return to their villages before the start of the lockdown imposed by the West Bengal government to limit the spread of the coronavirus. Photograph: Rupak De Chowdhuri/Reuters

Meaning 20.61 crore on the subcontinent, including what is today Bangladesh and Pakistan.

Some of this was due to an increase in population and some due to the increase in territory controlled by the British, which kept expanding over the years.

Why did the population not grow over an entire decade? The answer is an H1N1 virus which is called the Spanish Influenza.

This was an epidemic like the coronavirus and it killed off the entire population growth of a decade in India.

Around 1.5 crore people and most likely more than that were killed by it.

The flu came to India from Europe, where it broke out in military hospitals towards the end of the first world war.

We don't know how it originated, but it is possible that it was transferred from birds or animals being slaughtered for the armies's messes.

Indian regiments which fought for the British empire returned to Bombay after Germany surrendered in 1918 and the fighting ended.

They brought the virus with them, just as those coming from abroad have brought the coronavirus.

Many nations had fought the war including the United States and so the returning soldiers took the disease around the world.

It is thought that 25% of the world's population was infected and probably killed around 10% of those infected.

These are very high rates of both transmission and of fatality and that is what we are faced with in the coronavirus.

The problem with a new virus is that it has no cure.

There is no medicine that can be taken and it has the ability to spread very rapidly as we are seeing in India today.

And all this happens in the same day.

There is no decrease in the lethality of the virus as it passes from one person to another and the virus does not dilute.

There are ways in which the chain of the spreading can be halted and that is to end contact between all people as far as possible.

This ensures that those who are infected have the time for the disease to pass through their system.

Some survive and others will not. But the isolation ensures that even those who are infected keep the disease to themselves.

The point of isolation is not the benefit of the patient, but the others around him.

China halted the spread of coronavirus through lockdowns of entire cities.

People were banned from travelling outside their homes.

The government ensured that food was supplied to each home by trained people.

In Europe, it is not possible for democratic States to order or enforce absolute shutdowns like China.

This is the reason that the spread of the virus in Italy and now Spain is faster and the death rate higher than in China.

Of course, Europeans have been practising social distancing and self quarantine as we have seen in the videos, but this is not as effective as a total lockdown.

On Friday, March 20, in Italy (which has a population of less than Gujarat) 627 people died and another 6,000 cases of Coronavirus infection were recorded.

Just in one day. And unless the chain is broken, or the virus itself mutates into something less infectious and less lethal, the infection spreads exponentially.

We are familiar with exponential growth through the story of the man who asks the king to give him one grain of rice for the first square of the chessboard, then double it with each square.

Now assume that these are people and the 1 represents the first infected person entering the country.

By the time you reach the 64th square, everybody has been infected except a few.

This is what will happen with coronavirus.

The fact is that India has no defence against coronavirus.

One third of all Indians live in one room. Another one third lives in 2 rooms.

They cannot self quarantine or isolate and if infected they will pass it on to others.

It is impossible for India to control an epidemic. We do not have the State capacity of China to deliver food by trained and protected individuals to each home and order everyone to stay at home.

That will not happen in India.

India spends 4 times on defence what it does on health.

Last year, the government gave only Rs 3,200 crore to Ayushman Bharat (what is called Modicare).

India has 70,000 hospital beds and only a few ventilators.

Those infected who might be able to be saved in another country will die in India.

This is a fact and we will learn of this very soon as we confront a disease that will kill not in numbers alone but a fraction of the population.

The world will notice that India cannot spread the contagion and there will be consequences of that which we shall soon see and they will not be good for us.

The good thing about India, which perhaps no other country has, is our fatalism.

We are so accustomed to extreme deprivation, misery and loss that there will be no revolution, no social upheaval as hundreds of thousands of people will die.

Those of us that survive this plague will carry on just as the survivors of the Spanish Influenza did a century ago.