'What is required is to make Pakistan less war-like and more modest in its ambitions. To normalise with India and to reduce the State's fondness for religion.'
'It is pragmatism and not charisma that it required and it is by being boring and not heroic that this can be achieved.'
'This is the moment of realisation which brings the Pakistani leader into conflict with the army.'
'Imran Khan will learn the lesson in time,' says Aakar Patel. 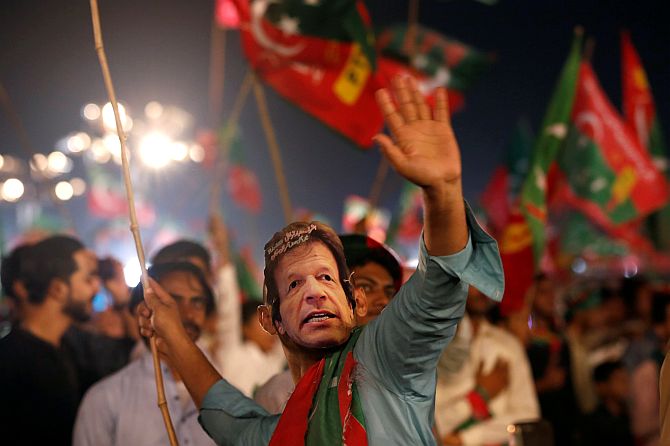 IMAGE: A supporter of Imran Khan wears a mask of the Pakistan Tehreek-e-Insaf leader and dances to party songs during a campaign rally July 22, 2018. Photograph: Akhtar Soomro/Reuters

Pakistan awaits its latest saviour, the fast bowler Imran Khan, who will most likely become prime minister after Wednesday's election.

He is the candidate preferred by the army and the pliant bureaucracy that services it, jointly referred to by Pakistan's media as the 'establishment'.

The final step in this direction came with the arrest and jailing of Nawaz Sharif, the popular Punjabi leader (of Kashmiri origin).

The strength of Khan's party, the Pakistan Tehreek e Insaf, is in the Khyber Pakhtunkhwa region and in some parts of Punjab, where Sharif's party is also strong.

It would not have been possible for Khan to succeed democratically unless Sharif had been laid low, as has been done with his conviction (thought by many to be unfair) in a case of corruption and disproportionate assets triggered by the Panama Papers revelations.

With Sharif out of the way, the road for Khan is open.

Why is Khan seen as the preferred candidate? That is simple to tell.

In his narrative of what is wrong with Pakistan, the army does not figure.

It is the corruption of Pakistan's political parties and past leaders, and it is the is the United States and its wars that to his mind have held back his nation.

The other thing about Khan is his embrace of religion and his comfort with the role of Islam in the modern State.

This aligns him with the worldview of the 'establishment', and if he should win the election, Pakistan will finally have the ideal government.

Unfortunately, this is a myth.

Khan, if he wins, will go the way of the other Pakistani leaders because he is part of a pattern that remains unrecognised.

It may be strange now, but Sharif was once exactly in the same position as Khan.

In the 1980s, he had been handpicked by then president General Zia-ul Haq as the next political leader.

After Zia's death, and Benazir Bhutto's return from exile, Sharif was used by the army to counter her 'liberal' instincts, resulting in a hung parliament.

Benazir recognised that she could not rule without the army's goodwill and succumbed to their policy of jihad in Kashmir, bringing grief to both sides of the Line of Control.

But she was independent of mind and in time came to see that for Pakistan to normalise, it would have to move away from the core beliefs held by the army.

Unfortunately for Pakistan, she paid for this independence with her life.

Sharif also came to the same realisation in time.

He began as a leader who was willing to go along with the army, but for the last decade or more he has been attempting to normalise with India.

This realisation usually comes to tough-talking Pakistanis after they come to power and the reality of the world dawns on them.

Even General Pervez Musharraf, who made his name through the adventure at Kargil (which the scholar of South Asia Stephen Cohen called a tactical victory but a strategic blunder) in the end wanted peace with India.

Before the 1980s, the saviour was Zulfiqar Ali Bhutto, who became a national hero for his recklessness. Bhutto as a young minister encouraged then president General Ayub Khan to begin a war with India.

And then he stabbed his benefactor in the back by saying, after the world forced the nations into peace at Tashkent, that Ayub had betrayed Pakistan.

This made him popular with the establishment and he came to power. His failure to change anything came at great personal cost to him and he was hanged by the military a few years later.

The same cycle keeps repeating itself, and leaders come to power in alignment with the military's anti-India position.

The saviour then realises that the tools he has at hand are not only insufficient and inadequate but totally wrong for the job at hand.

More conflict and more aggressive posturing cannot help a nation whose fundamental problems are poverty and an inability to solve basic governance issues.

What is required is to make the nation less war-like and more modest in its ambitions. To normalise with India and to reduce the State's fondness for religion.

It is pragmatism and not charisma that it required and it is by being boring and not heroic that this can be achieved.

This is the moment of realisation which brings the Pakistani leader into conflict with the army.

Military rulers like Ayub and Musharraf found this out, as did political leaders like Benazir, her father Bhutto and Nawaz Sharif.

Imran Khan will also learn the lesson in time. 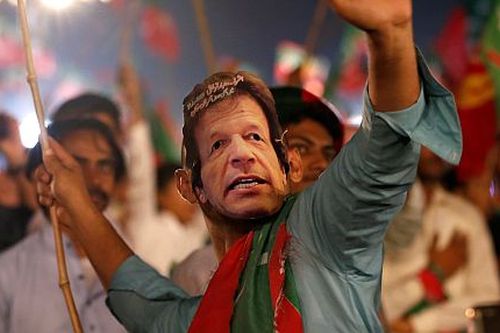