The strategic success of the surgical strikes has not matched their brilliant tactical achievement, says Shekhar Gupta. 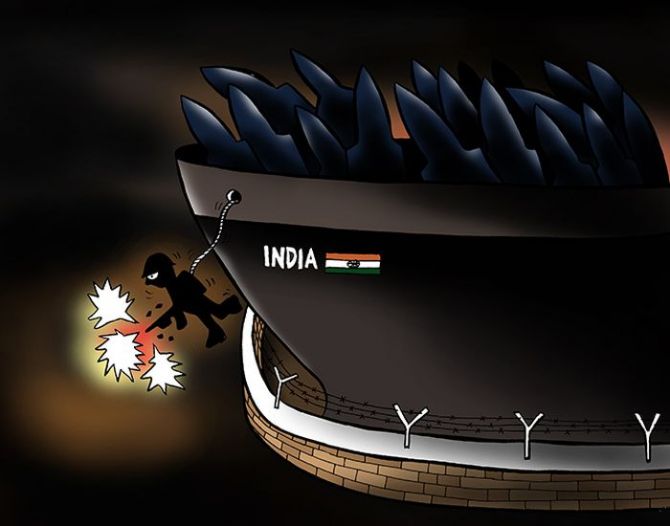 Here are two sets of evidence as we assess the cost-benefit outcome of the surgical strikes last year.

The first of these is being presented by the military establishment at the say-so of the political leadership. It isn't being done through a conventional method like a press conference with a liveried general explaining the operation on a screen with a laser-pen and showing pictures or recoveries as evidence.

This is being done through the conventional news media.

The release of two significant books has been timed with the first anniversary of the strikes. Both are written by prominent defence reporters, well-connected in the military-political complex. Both sets of authors are trained in covering military affairs, so you'd rather take the works of both seriously.

Both assert that the strikes did take place. The primary evidence is first-person interviews with some of the young, unnamed special forces officers. These we should take at face value.

There are also impressive quotes from top generals and the political leadership, which should be seen in the larger perspective: Of the internal political intent of the strikes. This, let me state clearly, is a perfectly legitimate objective in a democracy.

Somewhat less convincing, even juvenile, has been the non-stop coverage of what we often describe as commando-comic channels.

There are 'interviews' with masked para-commando officers, red berets, shoulder badges, the winged-dagger, and the loop -- how angry we were over the Uri attack, how we planned the strikes, and how successfully we carried these out and returned unscathed!

Running on loop on the rest of the screen are hazy, typical pale infra-red green night-vision images of some military operation, so clumsily done that the camera covering good commando firing also catches the bad guy getting hit and neatly falling, like in Sunny Deol movies.

But even if these images are picked up from some juvenile commando videos, three facts do not change: One, that there is sufficient evidence that what is described as surgical strikes did take place.

Second, that the Indian special forces returned without serious casualties -- it is impossible to hide casualties, and India doesn't do it.

And third, nobody is claiming what these strikes achieved is beyond the satisfaction of a night of revenge.

There are two aspects of a military operation: Tactical and strategic.

Tactically, the surgical strikes were a success. While there aren't any specific claims of casualties and damage on the other side, it should be acknowledged that a very dangerous series of operations across the Line of Control were carried out with great professional panache and valour.

Because all of it worked to perfection, including the maintenance of secrecy before and after, so difficult in a cluttered theatre like Kashmir, we can declare it a success.

A larger, strategic objective of the strikes wasn't stated. Was it to just tell the Pakistanis that each time they do something like Uri, there will be a tit-for-tat?

Or, was it to deter them and their malevolent proxies from carrying out such attacks in future? The evidence of the past year tells us that none of the two has played out, definitely not the second.

My colleague Manu Pubby, who is among the finest defence reporter-writers in our country, has researched figures from official records, including Parliament questions, to show that rather than deter them into better behaviour, Pakistani mischief along the Line of Control increased in this year.

The number of ceasefire violations, for example, had reached 228 on July 11 this year. This is the exact equal of the number of violations in the whole of 2016.

But there is a big improvement in a different sector -- the International Border managed by the Border Security Force. The number here in the same period was just 23 against 221 in 2016.

But please note that this border is fundamentally different and distant from the LoC. Against a total of eight Indian soldiers killed along the LoC last year (not counting attacks like Uri deeper inside), the number, until 11 July this year, was four.

These numbers are from a reply given in the Lok Sabha by the minister of state for defence, Dr Subhash Bhamre. There have also been attempts at further Uri-type raids, but foiled by alertness.

In the Rajya Sabha, Dr Bhamre also gave some numbers on infiltration bids on the LoC foiled by the Army. As against 27 in 2016, the number had reached 16 by July 2017, so the average is being maintained.

The armed forces had more success as the number of infiltrators killed more than doubled (36 by July 2017 compared to 37 last year). This denotes success and improved LoC management. But the entire set of figures tells us that if deterrence was the objective of these audacious strikes, it hasn't been achieved yet.

It is in the nature of strategic sciences and military craft that radical new ideas do not emerge every other day, unlike a new software or app. There was a much-celebrated Revolution in Military Affairs (RMA) over two decades ago, mainly linked to how warfare would change with new technologies.

Another came in 2005, with the publication of British General Rupert Smith's The Utility of Force (Knopf), hailed by some as a seminal treatise in the class of the work of Carl von Clausewitz, and by others as pop-military science.

Much debate in fact (six of some 10 most globally influential reviews I checked) was centred or began with his provocative first four-word sentence in the book: 'War no longer exists'.

It was a killer sentence. He said conventional, 'industrial scale' wars in which large bodies of men and machines clashed seeking one clear outcome were over. New wars, he said, would be between or with peoples.

It follows that these wars will be at lower intensity, and over scattered geographies and timelines. Large, heavy armies will not be able to bring these wars to conclusion and thereby not have the 'utility' to justify what nations continue investing in these.

It follows that such wars could be never-ending, as the Israelis have found even in their nearly stateless neighbourhood, or the Americans now in Afghanistan. In some cases, it gets further complicated when nations become involved with warring people, or, rather more specifically for India in Kashmir, when one nation (Pakistan) gets involved with people on both sides of the LoC.

This helps us understand why the strategic success of the surgical strikes has not matched their brilliant tactical achievement.

Terrorist lives lost do not bother Pakistan as they are an expendable and unlimited resource. To deter them militarily in this unconventional war, such strikes will need to be frequent and, necessarily, one-sided. Does such positive (military) asymmetry exist for India over Pakistan?

Two examples are popular in our country now: Israeli raids over Palestinian areas and American drone strikes over Af-Pak regions and now in the ISIS (Islamic State) zone.

Both work in an environment of total military asymmetry and air superiority. Without the latter, the most lethal -- and expensive -- drones will have their limitations as they can't survive a good air defence system.

An asymmetry can be aspired to, but India should ask if it is willing to increase its defence spending very considerably, maybe double it from the current sub-2 per cent of GDP.

Rajiv Gandhi had taken it to 3.38 per cent in 1987-88. He also gifted us the economic crisis of 1990-91. If this is the only way to counter this pestilence from the other side, India should take a deep breath and move with determination.

Are there more cost-effective ways? This is the debate India's strategic community needs to have, and not only ritually on the anniversaries of surgical strikes.