'China any day would prefer to team up with India and dump Pakistan once the resolution of the border dispute becomes an accomplished fact,' says B S Raghavan, the distinguished civil servant and long-time China-watcher. 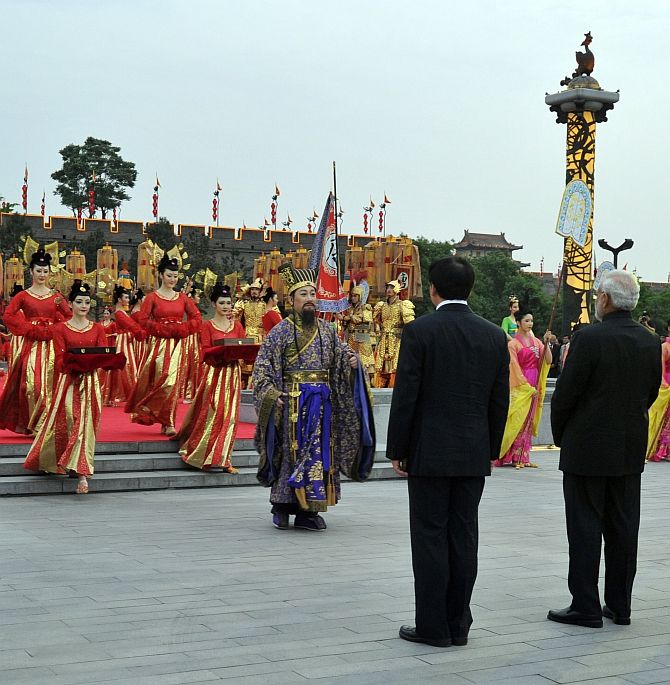 IMAGE: Prime Minister Narendra D Modi with Chinese President Xi Jinping in Xi'an during the Indian leader's visit to China in May 2015.

There are familiar rule books by which most countries of the world have for centuries worked out their domestic policies and economic frameworks, and played their geopolitical and diplomatic games with the outside world. But China's rule book is unique and its very own.

This is what drives people into read something suspiciously unfamiliar in whatever China does.

Even in putting its largesse and excess capacity to use in offers of projects to other countries, China has perfected its own brand of a strategy that impresses with a few features compelling attention: The daring scope and sweep of its out-reach; the imaginative hard-sell methods it adopts; and the sustained, unabashedly unapologetic and assertive promotional campaigns behind which it puts all the weight and might of the State from the President downwards.

The mainspring of most of the scepticism and suspicion on the part of political commentators and analysts of the rest of the world, and especially those in China's immediate neighbourhood is the feeling of inferiority generated by their inability to match China's clout in this respect.

India, in particular, is in a piquant situation.

On the one side, countries of the ilk of the US, Britain and Japan are building it up as a pivotal power of the region, and a world power of the future, and a strategic partner, luring India to lock horns with China and stop it in its tracks.

On the other, India sees itself being constantly needled by China by keeping the border on the boil, by practising economic one-upmanship, by seducing smaller and needy states with its deep pockets, by cosying up to Pakistan and by causing, as a cumulative effect of these various steps, a shrinkage in the geopolitical space available to India.

India's policy planners and students of international realpolitik seem to have given up on any prospect in the foreseeable future of India mending fences with China.

They seem to have assumed that China is not interested in settling the border dispute, but in intensifying, blowing up or taking it to a feverish pitch at particular points of time as suits its larger political and strategic objectives.

In their view, any initiative taken by India towards rapprochement will only be interpreted by China, in its arrogance, as cowardice and submissiveness and exploited as such.

They have convinced themselves that it only understands and respects toughness and strength. While putting in every determined effort to bring itself on par with China, India has necessarily to forge military and economic bonds and alliances with countries which will enable it to deal with China from a position of vantage.

It should be no surprise, and in fact it is quite on the cards, that China too, on its part, is making its moves based on a somewhat similar assumption about what it perhaps sees as India's intransigence.

Truly speaking, there are only two issues between the two countries and the relations between them can proceed on an even keel if they could be got out of the way.

The first, of course, relates to the border.

India is interested in sector by sector resolution of the border dispute. The official Indian stand is that in the eastern sector, the McMahon line along with the watershed principle should be accepted as the basis of resolution, by demarcating the Line of Actual Control on the ground, and that likewise, the LAC will have to be demarcated and negotiated in the middle and western sectors as well.

India's stand is that Aksai Chin is still a disputed area, and that some parts of Pakistan's border agreement with China ceding territories India considers its should be reopened.

The latest thinking on the Chinese mind is available from an interview with Dai Bingguo, who served as China's boundary negotiator with India from 2003 to 2013.

According to a report published in The Indian Express on March 3, 2017, Dai told the China-India Dialogue magazine, ahead of the India-China strategic dialogue in February 2017, co-chaired by Foreign Secretary S Jaishankar, that the border dispute between China and India could be resolved if India accepted China's claim over the Tawang region in Arunachal Pradesh.

His actual words were: 'If the Indian side takes care of China's concerns in the eastern sector of their border, the Chinese side will respond accordingly and address India's concerns elsewhere.'

'The disputed territory in the eastern sector of the China-India boundary, including Tawang, is inalienable from China's Tibet in terms of cultural background and administrative jurisdiction.'

'Even British colonialists who drew the illegal McMahon Line respected China's jurisdiction over Tawang and admitted that Tawang was part of China's Tibet.'

It is clear that if left to officials the issue can never be resolved.

Meetings of officials of both sides will only harp on the same contentions every time, and the deadlock can never be broken.

The solution has to be political, and at the highest level, between the prime ministers of India and China, with the Chinese president briefed at every stage.

The historic example set by President Richard M Nixon can serve as a guide. For 25 years from the advent of the People's Republic of China, the people and administrations in the US thought of China as the devil incarnate, to be shunned, spurned, and stamped out of existence.

The US blackballed the so-called Red China (a sobriquet commonly bandied about then) out of the UN. President Nixon, to boot, was a Communist-cum-Communism baiter and played a leading role during the McCarthy era in whipping up frenzy against 'Reds under Beds'.

That kind of country, that kind of man, made a spectacular, almost unimaginable, leap into the future by courageously making a clean break from the past to establish relations with China.

The other contentious issue bedevilling India-China relations goes closer to the bone.

China seems to think nothing of poking India in the eye by pulling out all the stops to set Pakistan not only as a counterpoise to India but to make it a sharp-cutting tool to bleed India.

One can be certain that this is not due to its conclusion that Pakistan is any great shakes as a useful or reliable ally; it may just be a tactic simply in order to wear India down sufficiently to put it in a mood for an accommodation through negotiation.

China cannot be so egregiously dim and dumb as to be unaware of the moth-eaten, brittle condition of Pakistan as a failing State which is bound to become an albatross around its neck.

One can be sure that civilisationally and strategically, China any day would prefer to team up with India and dump Pakistan once the resolution of the border dispute becomes an accomplished fact.

If the idea of escalating the border issue to the very summit of both governments is accepted, and if it is also understood that it could involve give-and-take on both sides needing support from Parliamentary and public opinion in India, a thorough and comprehensive preparatory effort should precede the talks at the levels of the prime ministers.

It is best that having regard to the sensitivity of the issue, the prime minister takes the help of a brains trust of five or six members drawn from the government, reputed think-tanks and major political parties forming part of the ruling alliance and the Opposition.

It can be entrusted with the task of preparing a confidential brief setting out the proposals and fallback positions, and the factors and considerations leading to them.

A special emissary from the prime minister, preferably the minister of external affairs herself, could undertake an advance visit to Beijing to explain the proposals and ensure that the talks at the summit yield a successful outcome.

The two prime ministers could then give the final touches and clinch the deal.

India and China have been procrastinating for far too long on a matter which is at the heart of their relations.

They represent ancient civilisations and are repositories of the incomparably rich experience and wisdom flowing from them. They owe a duty to themselves and humanity at large to live up to that magnificent heritage.

Statesmanship is all about taking time by the forelock. Now is as good a time as any for India to get proactive and bring about normalisation of relations with China.

If only the two nations join hands in mutual trust and cooperation, it will be to the lasting benefit of Asia and the world on every count: Ushering in an era of peace, stability and security; faster economic development; and overall prosperity.

B S Raghavan is a former member of the Indian Administrative Service who handled security issues during the Chinese invasion of 1962 and Indo-Pakistan War of 1965 as Director, Political and Security Policy Planning and Member of the Joint Intelligence Committee.
He is currently Patron of the Chennai Centre for China Studies. The views expressed are his own.