Future, even present, wars -- at least those involving such tech giants as China -- include hi-tech battlefields, which a Pakistan-obsessed India has not sufficiently prioritised.
Today's generals plan on how to disrupt an enemy city's power supplies, rail networks, airports, ports, and government departments, not just by bombing or torpedoing them; they also examine the option of tripping up the computer networks that run these, notes David Devadas. 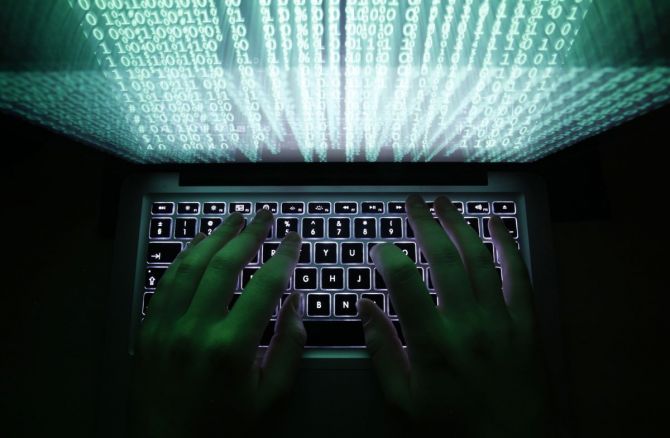 Kindly note the image has been posted only for representational purposes. Photograph: Kacper Pempel/Reuters

Now that key enabling agreements have been reached with the US, it is time to think big, and plan big, in order to prepare India for cyber and space warfare.

Those are not just sci-fi fantasies of a time far in the future, they are crucial battlegrounds right now, right here, right now in the 21st century.

Data sharing is at the heart of the defence-related India-US agreements, the last of which was signed on Tuesday when United States Secretary of State Mike Pompeo and Defense Secretary Mark T Esper were in New Delhi. Indian experts must now draw on the vast data the US has, and utilise it to develop tools for contemporary warfare.

They need to transform India's defence capabilities, instead of just tinkering with the forces and doctrines which the British set up in the colonial armed forces.

Future, even present, wars -- at least those involving such tech giants as China -- include hi-tech battlefields, which a Pakistan-obsessed India has not sufficiently prioritised.

Artificial Intelligence is a key resource for cyber and space war. 5-G technology is set to be. As for data, it is the gun powder of 21st century armory.

China has invested hugely in cyber war tools, to the extent that it could possibly be the world's most advanced in this field.

More than a decade ago, the Chinese army had three entire brigades dedicated to cyber war. And there have been covert reports in the past few years that several tens of thousands of Chinese soldiers are deployed with computers as their field of battle. Their target: India.

Public memory tends to be short, but we must not forget that a prominent Chinese character appeared on screens when the Indian defence ministry's Web site was hacked in April 2018. That was a warning.

Further (apparently Chinese) attempts to hack the Web sites of the ministries of defence, external affairs, and information and broadcasting were reported in June this year.

While ISRO has given India a proud place in space, India's cyber preparations lag behind. The forces ought to now explore joint cyber drills with the US, train with the US cyber command, and seek extension of the current pacts to include cyber intelligence sharing.

The government should push for transfer of technology between ISRO and NASA, joint ventures with US, Israeli, and other cyber companies, exchange programmes with US universities, and incentives for universities with cyber specialisations.

A city could be chosen as a centre of cyber excellence, to which investments could be invited from foreign enterprises.

To maximise gains, the country could even seek to integrate space and cyber domains, for there is a band of grey between them. Companies like SpaceX too could be encouraged to invest.

Since India was considered a world leader in software development three decades ago, it should surely be able to quickly recover the ground it has lost in hi-tech for defence.

While creating an ecosystem that draws from academia, corporates, the forces, and the government, social outliers should be encouraged, for out-of-the-box thinking is of critical importance. Hackathons could be sponsored in order to identify talent.

A young cohort of tech-savvy personnel must be trained and deployed. Salaries and emoluments must be attractive, and management systems should be drawn from the private sector, for this work requires a different mindset, work ethic, and work environment than the forces are used to.

At present, a retired lieutenant-general has been appointed as the National Cyber Security Coordinator. Trying to build innovation through sinecures, more rounds of musical chairs in government agencies and departments, hardbound rule-books, and hierarchical pyramids do not sound promising.

Sure, such a high security subject needs to be chaperoned by government, but the nodal authority should be privileged as a department in the prime minister's office, like the department of space.

Far too many Indian strategists seem to see the enhanced data access the agreements with the US will provide only as facilitation for Indian Air Force planes and Indian Navy vessels to zero in on their targets more precisely.

No doubt the data the India-US agreements make available will immediately optimise the functioning of submarines, aircraft, missiles, and the various kinds of armaments carried by these.

Contemporary versions of weapons and launch vehicles that may have the same names as those used in the Second World War are now vastly more sophisticated. They depend on chips and other hi-tech.

One has no doubt in any case that the Indian Army, Indian Air Force and Indian Navy would give China's PLA a bloody nose, as long as battles remain in traditional domains -- as at Galwan in mid-June.

But India must think bigger, to deploy the resources to which these agreements give it access in order to catch up with its opponents in emerging hi-tech battlefields.

Today's generals plan on how to disrupt an enemy city's power supplies, rail networks, airports, ports, and government departments, not just by bombing or torpedoing them; they also examine the option of tripping up the computer networks that run these.

More threatening is the possibility that an enemy may take over a system by hacking into it, instead of just crashing it. That could have particularly ominous repercussions for the command and control systems of an armed force, or even of a particular ship, fighter craft, tank, or missile.

India must lose no time to build robust cyber defences.