After Bal Thackeray, what consumes most political observers is his immediate political legacy.

What is happening in Maharashtra is hardly unique to the state -- indeed, with regional parties increasingly becoming family businesses, such feuds are likely across the country, says Rohit Pradhan.

Beyond his contested legacy and the often poisonous rhetoric, here's something which should be acknowledged about Bal Thackeray: He had a masterful ability to forge personal relationships which often transcended politics.

Unsurprisingly, prominent Bollywood personalities like Amitabh Bachchan and Sanjay Dutt have taken to social media to reminiscence about Thackeray and acknowledge the support they received during times of great personal and professional travail.

It would be churlish to attribute these comments solely to fear; a factor which undoubtedly pervades much of Mumbai as soon as the Thackeray persona is invoked. But it is not as surprising as it seems.

Thackeray fashioned himself as the King of Mumbai who dispensed instant justice unencumbered by such minor details as evidence or due process. Simply put, relationships were the operative currency of the Thackeray court.

But as Mumbai moves beyond Bal Thackeray, what consumes most political observers is his immediate political legacy.

In the last few years, Thackeray had worked assiduously to ensure that his son Uddhav followed him as the supreme leader of the Shiv Sena. (It is a familiar tale in Indian politics in which parties ostensibly supposed to articulate larger social and political aspirations regress into family-owned enterprises.)

While there have been some efforts at rapprochement between the estranged cousins, any reconciliation may be difficult in Bal Thackeray's absence. A more likely course would be for Raj Thackeray to simply acquire the Shiv Sena and push Uddhav to the margins.

In any case, the Opposition in Maharashtra -- an electorally crucial state -- will remain weak, a prospect which Congress strategists clearly recognise and relish.

But what is happening in Maharashtra is hardly unique to the state -- indeed, with regional parties increasingly family businesses, such feuds are likely across the country.

The chief minister of Punjab, Parkash Singh Badal, is 84 years of age and while his son is the deputy chief minister and the designated successor, he still has not been able to ensure his accession to the throne.

Other prominent leaders like Samajawadi Party supremo Mulayam Singh Yadav are relatively younger and have tried to ensure a clear line of succession for his son, Akhilesh Yadav. Nevertheless, with almost the entire Yadav clan engaged in the business of politics, power struggle is inevitable in the future.

Tamil Nadu, perhaps, is the most interesting case. Dravida Munnetra Kazhagam supremo M Karunanidhi is pushing 90 and is generally thought to be in poor health. However, his two sons -- M K Stalin and M K Azagiri -- are engaged in a battle for supremacy while sister Kanimozhi is playing her own political games.

And then there are Karunanidhi's two grandnephews -- the ever resourceful Maran brothers who have benefited immensely from their family's political successes. It is almost given that Karunanidhi's absence would trigger a vicious succession battle with the distinct possibility that the party may fracture into fissiparous political factions organised around individual family members.

An interesting phenomenon in Indian politics is that the regional parties are almost always restricted to state lines with very limited appeal outside their core support areas.

Of course, this is an advantage at the time of elections as these state-level parties are better able to articulate regional aspirations vis-a-vis the national parties.

However, their geographical limitation means that ambitious family members are fighting for the same turf. And with politics emerging as the most lucrative of businesses, the allure of power and lucre would be hard to resist further underlining the inevitability of conflicts.

What may be the implications of these intra-family battles for Indian polity?

First, it provides an opportunity for the two national parties -- the Congress and BJP -- to regain their foothold in important states.

Many commentators have persuasively argued that the space for national parties in India is shrinking and regional parties are in the ascendant. But the existential threat posed to some of these regional formations by family in-fighting offers at least some breathing space to the Congress and Bharatiya Janata Party.

Already in Maharashtra, both the parties have benefited from divisions within the Sena Parivar. Tamil Nadu may be a harder nut to crack with its strong parochial tendencies and the complete absence of the BJP as a political force of any consequence in the state.

Nevertheless, for the Congress, which has long chafed under the suffocating hold of the Dravidian parties, may finally be able to chart its own course.

Second, at least in the short term, both the central as well as state governments may be increasingly unstable with multiple partners and unwieldy coalitions.

Indubitably, many of these parties would not survive their first hurrah in the electoral arena, but in the interim, it may lead to policy paralysis and deterioration of governance precisely at the time when India could least afford it.

And with little to distinguish these parties ideologically, political contests would be limited to populist rhetoric with increased social sector spending.

More broadly, the specter of political parties as little more than personal fiefdoms witnessing acrimonious family battles risks the popular support for Indian democracy. Now, it is true that the Congress party -- India's dominant political force -- has been owned by a single family since Independence.

Nevertheless, historical reasons as well as the undeniable public dignity associated with the Nehru-Gandhi family have largely blunted the charges of family rule and nepotism. But with mini-Congresses sprouting all over this vast land, there is a genuine risk to the legitimacy of Indian democracy.

In addition, with the doors of mainstream parties closed to outsiders, demagoguery and communal polarisation will be preferred tools of political mobilisation. The meteoric rise of Arvind Kejriwal with his obvious distaste for any semblance of due process is emblematic of the same.

Unfortunately, there are no easy solutions in the offing. Electoral reforms and forcing political parties to conduct regular internal elections may help but are unlikely to have more than a marginal impact.

For political parties to become truly democratic requires not only a major reorganisation of Indian democracy but of the larger society as well.

Perhaps, the best we can hope for is that democracy itself will provide the corrective prescriptions -- as it often does.

Dr Rohit Pradhan is a fellow at the Takshashila Institution. The views are personal. 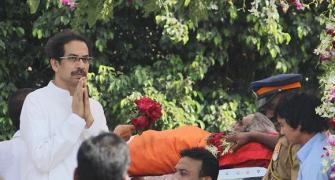 'Uddhav, Raj should unite for the future of Marathis'

Goodbye Mr Thackeray, you taught me how to love