'A fierce crusader against communalism, George joined hands with majoritarian forces, never to revisit or re-assess his saffron association.'
'He was a Union minister in 1998-2004, a time when people like Graham Staines were lynched in Orissa.'
'On the Gujarat pogrom of 2002, George went on to kind of justify the slashing of pregnant women, by saying in the Lok Sabha that this was nothing new for India.'
'Thus, he was in sharp contrast to what he had himself stood for in the heyday of his political career in the 1970s and 1980s, says Mohammad Sajjad. 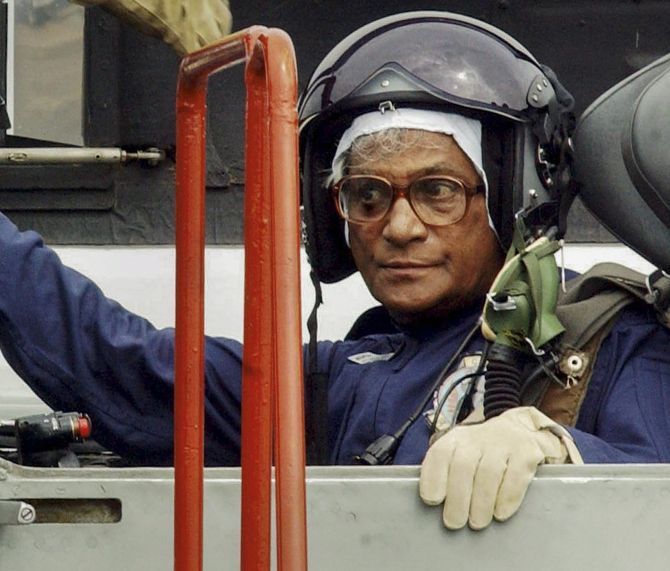 IMAGE: An August 1, 2003 photograph of then defence minister George Fernandes inside the cockpit of an MiG-21 aircraft after completing a sortie at the Ambala air force station. Photograph: PTI Photo

George Fernandes represented Muzaffarpur (Bihar) in the Lok Sabha several times, and therefore, the history of Muzaffarpur and his political career are closely intertwined. Arguably, his changing political affiliations largely changed the political orientations of the region.

George (the people of Muzaffarpur generally called him by his first name) had earned the epithet of 'giant-killer' when he defeated S K Patil in Bombay in the 1967 Lok Sabha election. He appeared in Muzaffarpur for the first time in 1977 to contest the Lok Sabha election and won it in the Janata wave, defeating the Congress nominee and an 'invincible' giant of Muzaffarpur, Digvijay Narayan Singh (1924-1991), grandson of Langat Singh (1850-1912).

Mark Tully, in his book No Full Stops in India (1991) records Digvijay as the most upright politician of India. Digvijay was a close friend of Feroze and Indira Gandhi. Yet, Digvijay opposed Indira's Emergency.;

In the popular phase of the anti-colonial struggle, Muzaffarpur slowly became an epicentre of kisan movements. It therefore gave rise to anti-Congress, Socialist politics in the early years after Independence. In 1957, Asoka Mehta, the mayor of Bombay in 1946-1947, was elected from the constituency.

In the 1957 assembly election the Socialist candidate won from Muzaffarpur. A study by Shree Nagesh Jha (Economic and Political Weeekly, October 22, 1966), said 'caste, class, party ideology, personal influence, and traditional loyalties' all had been at work.

In 1952, Kripalani contested from Saharsa where Ramesh Jha worked hard for him. Jha was agonised by the RSS activists and on September 22, 1947, wrote to Premier (as the chief minister was then called) Shri Krishna Sinha (1887-1961), that 'the people are feeling quite unsafe and the government should put an immediate ban on such communal fascist organisation'.

Just see how many Socialists chose to forget all this! To the best of my knowledge, Kripalani, the Sitamarhi MP, didn't utter a word in Parliament on the communal violence of Sitamarhi in 1959.

Lack of land reforms and huge caste-based socio-economic inequalities, despite the Socialists's presence and victories, eventually resulted in the rise of Naxalism in Muzaffarpur's Mushahri during 1967-1972, and was studied extensively by Arvind N Das in his book, Agrarian Unrest and Socio-economic Change in Bihar (1983).

But it was never to happen, it just didn't happen. Muzaffarpur remained a stinking town, an 'urban jungle', as described by the scholar, journalist and author Arvind N Das (1948-2000). The 'un-intelligentsia' of Bihar, and the media, kept berating Lalu Prasad Yadav for having ruined Bihar's economy and governance. They hardly ever asked such questions from the abovementioned stalwarts.

George is credited with having helped bring a Doordarshan Kendra to Muzaffarpur, besides the Muzaffarpur Thermal Power Station and the Indian Drugs and Pharmaceuticals Limited. This one has died its death as has the Bela Industrial Estate which was developed for industrialisation in Muzaffarpur. Before these, the only industries there were the sugar mills and a tobacco industry, Prabhat Zarda Factory.

In the 1930s, Arthur Butler's rail wagon factory came up in Muzaffarpur. That too stands closed now, and the incumbent regimes in Patna and New Delhi have not been subject to criticism as much as Lalu-Rabri Devi were.

George remained very active and a prominent figure in politics. He kept rising, serving as Union minister in various departments in non-Congress regimes. One does not know if he really did something great and memorable to arrest the decay of IDPL.

One also does not know if all these Socialist stalwarts elected from various seats in Muzaffarpur-Tirhut, including J B Kripalani and Asoka Mehta, did really make specific interventions in parliamentary debates highlighting the economic and governance related problems of this part of Bihar.

To some people of Muzaffarpur, George was perhaps the first and foremost accessible leader. During those days, relatively fewer members of the Bihari Diaspora were to be found in Delhi. People would communicate with him by writing their problems on a postcard and asking George to help them out. It is said that his office was very particular in responding to those letters, and at times keeping updated about the progress of the work.

His oratory in lucid Hindi and fierce articulation in exposing the under-performance of the Congress government, with data on the tip of his tongue, was something the people of Muzaffarpur, especially since the 1980s, remember about him.

Muzaffarpur is said to be an important centre of the Bhumihars, and Bihar elections are said to be the more caste-centric than other provinces. Be that as it may, the victories of George, a Christian, and not belonging to the dominant castes of Bhumihar-Brahman or Rajput, remains to some a matter of surprise.

Possibly his subaltern image, and fighting for labourers, must have helped. Even Dilip Kumar is said to have been so impressed by this trade unionist that he went on to observe George's activism from close quarters when acting in the film Mazdoor (1983).

Simultaneously, it should also be remembered that Muzaffarpur fell into the abyss of upper caste gangsters only after 1977. Of course, most of these Bhumihar-Rajput gangsters were supposed to have been patronised by the politicians from their castes.

Let us also understand that Muzaffarpur is largely a rural seat. How did it remain so enamoured of George, the trade unionist? After all, industry and its workers are 'urban' phenomena!

Muzaffarpur is also a big centre of Marwari cloth traders. Without their funding, hardly a politician can ensure his/her victory in elections.

Yet, how George kept winning elections with, or despite these factors, remains a matter of deep and comprehensive exploration. Did George win without really coming to terms with, and embracing, the 'rules of the game'? Did George's alleged association with the Baroda dynamite conspiracy case, endear him to the impatient youth with a propensity for violence?

For a detailed historical account of gangsters in Muzaffarpur, Chandigarh-based Hindi journalist from Muzaffarpur Kunal Verma's six-part blog Musafir (external link) can be referred to. Also read Soutik Biswas's article A kidnapped girl, a skeleton, and a house of memories (external link) which even the CBI failed to resolve.

These heartrending accounts are worth a read to understand Muzaffarpur and its politics mired in caste-based crime syndicates.

Despite having patronised many and having left too many resource persons helping him win elections in Muzaffarpur, George had to lose out in 2009, as he was denied a Janata Dal-United (the party he had founded) ticket by his protégés Nitish Kumar and Sharad Yadav.

Ironically, he was denied a ticket on the plea of his advanced age and fragile health, whereas he had recruited Sharad Yadav to the Janata Party in 1974 and ensured his entry into the Lok Sabha in 1977, by insisting on Sharad's age and youth. Sharad was then only 27 years old and a student activist in Jabalpur.

Ironically, again, the candidate who was preferred by the NDA in 2009 from Muzaffarpur was Jai Narain Nishad (1930-2018), who was of George's age and had undergone two bypass surgeries.

Today, Nitish Kumar who is shedding tears should recall what he did with George in 2009. A former minister, Ajay Singh, exposed all the unfolding drama of Socialist politics in Muzaffarpur in an interesting way in his Indian Express column The JDU's Oedipal Drama (external link).

These developments were taking place in the midst of many ironies. A fierce crusader against communalism, George had joined hands with majoritarian forces, never to revisit or re-assess his saffron association.

He was a Union minister in 1998-2004, a time when people like Graham Staines were lynched in Orissa.

On the Gujarat pogrom of 2002, George went on to kind of justify the slashing of pregnant women, by saying in the Lok Sabha that this was nothing new for India.

Thus, he was in sharp contrast to what he had himself stood for in the heyday of his political career in the 1970s and 1980s.

But that should not surprise us. George was the convener of the NDA as he had an ability to keep the flock together.

Looking at the Jayaprakash Narayan Papers in the Nehru Memorial Museum and Library and going through the 1976 correspondence between JP and George, one can easily make out that George played the role of creating a united Opposition even in January 1976 when he smelled that Indira Gandhi could order a snap election by releasing some prisoners and lifting the Emergency.

By late December 1976 this concern and apprehension had grown further. He was alarmed at the possibility of a sellout as many leaders were trying to make peace with Indira Gandhi. These stalwarts included Asoka Mehta, Charan Singh and even Atal Bihari Vajpayee. (See Rakesh Ankit's academic essay, Janata Party 1974-77: Creation of an All India Opposition (extyrnal link)).

Very few people know that George Fernandes evaded police arrest during the Emergency by hiding in Aligarh at an advocate and RSS pracharak's house. Later, an ad-hoc president of the AMU Students Union, Husain Waheed, became close to him.

George visited AMU and addressed students a few times. In one speech he said that Indian politics was ironical. Legislators are expected to fix everyday issues, which should really be fixed by the bureaucracy and representatives of local bodies, leaving legislators to think about and act on higher politics of legislation, policies and foreign affairs.

This may possibly have also been a commentary against the legislated 'illegality' of the Local Area Development Scheme, introduced by P V Narasimha Rao to save his minority government through legislative 'bribery' given to the legislators. This is how the legislators, having turned into some sort of executives, patronise contractors, the moneybags of their elections.

With the tragic death of George Fernandes, after prolonged bouts of Parkinson's and Alzheimer's diseases and the resultant loss of memory, an era has passed.

While looking back at his politics, an objective evaluation of Socialist politics in the Republic is much awaited: Their apparent lack of active support for Muslims suffering in major communal violence and displaying no strong aversion to the Sangh Parivar; their failure to articulate a cogent programme of economic development going beyond Socialist jargon and empty rhetoric; their push for land reforms too remained weak.

Their regimes essentially failed in providing even basic services like availability of food-grains and sugar to the poor. They may also be accused of having ruined the public delivery system in all branches.

Can they be accused of being the engineers of misery and decline of UP and Bihar, more so when provinces like MP and Rajasthan have come out of the BIMARU category?

All these questions need to be probed and debated. That could possibly be a better way of remembering George Fernandes's contributions and failures in the faltering democracy of ours.

Mohammad Sajjad is professor, Centre of Advanced Study in History, Aligarh Muslim University. He is the author of Muslim Politics in Bihar: Changing Contours and Contesting Colonialism and Separatism: Muslims of Muzaffarpur since 1857.