How and why Vaiko escaped disqualification in RS poll

Going by the letter and spirit of the relevant provisions of the Representation of the People Act, only a two-year jail-term would have attracted disqualification for a Section 124(A) offence. But given the ‘prevailing political environment’, neither the MDMK, nor the DMK wanted to take any chance, says N Sathiya Moorthy. 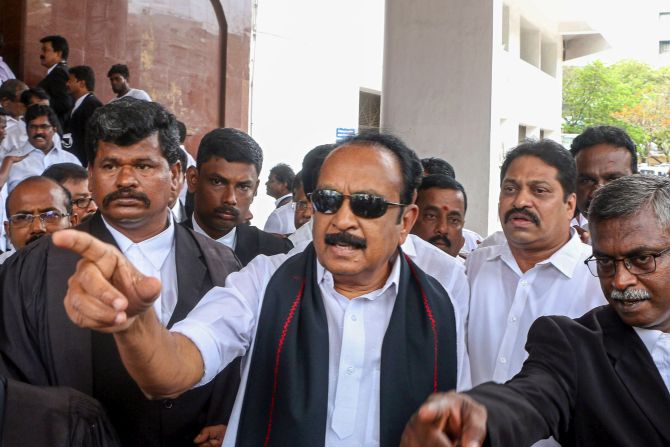 No one contested it, nor did any of the existing provisions for ‘disqualification’ seemingly applied, hence MDMK chief Vaiko would be returning to Parliament as a Rajya Sabha member after 23 years.

The returning officer for the six RS seats cleared Vaiko’s nomination without any serious issue, and DMK’s stand-by ‘dummy’ candidate has withdrawn his nomination, to make it a free-walk for all six candidates from Tamil Nadu.

A senior DMK lawyer N R Elango filed his papers after there was a certain discomfort in the DMK-MDMK leadership about the possibility of Vaiko being disqualified after a Chennai court sentenced him to one year prison term in  a ‘sedition case’ under Section 124 (A) of the Indian Penal Code (IPC).

However, going by the letter and spirit of the relevant provisions of the Representation of the People Act, only a two-year jail-term would have attracted disqualification for a Section 124(A) offence. But given the ‘prevailing political environment’, neither the MDMK, nor the DMK wanted to take any chance.

From the beginning there were clear indications that no other political party intended fielding candidates, who however needed to be nominated by 10 MLAs at the very least. Barring the Congress, with its seven MLAs, there was no other party that could have even dreamt of mustering the numbers.

The Congress is another ally of the DMK from the LS polls, and they have no reason to upset the apple-cart. Anyway, the continuing impasse at the national level following the resignation of Rahul Gandhi as AICC president, the state party is as much directionless in such matters as it is clueless.

AMMK boss and lone legislator T T V Dhinakaran too had declared his intention not to try field a candidate. Nor would he vote, as “there won’t be any need”, he said, implying that it would be a walk-over for the six candidates, three each fielded by the DMK and the ruling AIADMK-led combines

The AIADMK-led alliance too won the other three seats, and the DMK list of three, including Vaiko, made the grade. The AIADMK thus kept its LS poll commitment to the failed PMK ally. As expected, the latter nominated former Union minister Anbumani Ramadoss, who was an LS member from Dharmapuri in the last Lok Sabha. This time round, he lost to DMK’s Senthil Kumar by a huge margin.

The (other) two ‘AIADMK seats’ have gone to lesser-known party second or third-liners from chief minister Edappadi K Palaniswami’s western region. This in turn has left the already disgruntled faction identified with deputy chief minister and party coordinator, O Panneerselvam (OPS), raging. There is little that they can do by way of public reaction, especially when their government is walking on an ice-thin majority in the state assembly.

Be it as it may, Vaiko’s disqualification threat, if any, flowed from a court order on the eve of the notification of the RS polls. As irony would have it, the case was filed when DMK patriarch, the late M Karunanidhi, was chief minister the last time round (2006-11).

Much water has flowed under all the bridges in Tamil Nadu, so much so no one really remembers the nature of the accusation -- which related to what boiled down to a ‘pro-LTTE speech’, as the organisation remained banned in the country.

“I only suggested to (DMK president) Stalin to look for a stand-by candidate, anticipating possible conviction and/or disqualification,” Vaiko told a hurriedlyconvened news conference in Tiruchi after news of Elango’s ‘dummy’ nomination became known.

Vaiko also clarified that the DMK’s offer of an RS seat was meant for him personally, as a part of the LS poll pact, and not to the MDMK as a party. “Hence it’s proper that the DMK takes back the seat,” he said further.

The chances are that Vaiko’s decision was calculated to ensure a better seat-share for the party under DMK alliance in the 2021 assembly polls. While there are rumblings that Vaiko did not want to send any other party leader to Parliament when he was not there, MDMK second-liners concede that there could be open rift if Vaiko were to choose one over the other.

Otherwise, the DMK-MDMK combine was not sure if the EC would act fair and square by Vaiko, after the way it had conducted the RS polls in Gujarat this time.

They questioned the wisdom of the EC for conducing RS polls in Gujarat through two separate notifications for two seats, while in TN, for instance, all six seats go to the poll under a single notification.

Now that the Election Commission has cleared Vaiko’s nomination, technically he would also be the lone MDMK parliamentarian at present. Though the party has one member in the LS, A Ganesamurthi (Erode) contested on the DMK’s ‘Rising Sun’ symbol and won handsomely.

Had the EC rejected the nomination, centred on the 124(A) conviction, Vaiko was sure to move the courts even as DMK’s Elango kept the seat warm, for him to possibly occupy on a later date.

Vaiko is also yet to decide if he would contest the one-year sentence in the Madras high court, or walk into prison, citing his ‘ideological commitment’. Anyway, a one-year sentence would be over well before the assembly polls, due by May 2021, for him to return, lead the party and campaign for the alliance.

On the face of it, one-year sentence under Section 124(A) of the IPC should not have been a cause for disqualification, which is one of the ‘other offences’ under Section 8(3) of the RPA.

If anything, Section 8 does not even name ‘sedition’ as a specific offence, attracting disqualification, whatever the length of the jail term. All it says is that ‘other offences’ where punishment is more than two years would qualify for disqualification.

The general level of confusion in the matter flowed from lack of awareness about the specific sub-sections under Section 8, with vague memories of the disqualification of Lalu Prasad Yadav in Bihar and Jayalalithaa, nearer home in Tamil Nadu.

Both were graft cases, under the Prevention of Corruption Act (PCA). They fall under Section 8(1) of the RPA, where mere conviction would call for disqualification.

There are other offences under RPA Section 8(2), where a six-month jail-term would suffice for disqualification.

Vaiko is the first person in post-Independence India, where disqualification for sedition had become a matter of interest, though not a legal dispute, as yet at the very least.

Though the state government did charge a high 3,000 anti-Kudamkulam protestors under the 124(A), the cases were withdrawn. This also meant that Vaiko is the first one to be convicted under the said section.

Yet, it was Jayalalithaa’s case in 2001 which made history and also set a legal and judicial precedent. Though Governor Fathima Beevi, who was the first woman Judge of the Supreme Court, hurriedly swore in Jaya as chief minister after the 2001 assembly polls, the SC held that mere conviction was enough under RPA 8(1) for her disqualification.

The SC also clarified that the Madras high court’s ordering of a stay of the trial court order applied only to the ‘sentence’ part and not the ‘conviction’. It is this that made OPS’s name and face known to the nation as a whole, as Jaya chose him as CM in her place after quitting office, on SC orders.

It is another matter that the SC, while upholding her conviction in the main case later on, would accept as adequate penalty, her purported offer of surrendering the public sector ‘TANSI’ property, the purchasing of which by a company in which she was a partner, tantamount to ‘graft’ under PCA.

It meant that Jayalalithaa could return as CM, which she did, but only after obtaining a popular mandate from her mentor MGR’s one-time assembly seat, Andipatti -- as if that would also wash away the graft offence.