'It will not be a battle of unequals as it may have been thought a few months ago, but one on more or less a level playing field.'
'The Gujarat outcome cannot but breathe new life into the Congress for having almost succeeded in bearding the lion in its den,' says Amulya Ganguli. 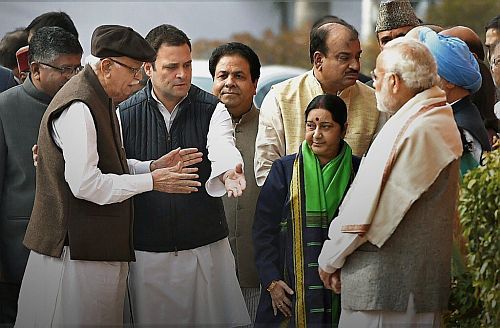 Much of the Bharatiya Janata party's celebratory speeches about the Gujarat 'victory' were about the party winning a sixth term in the state rather than on the sharp decline in its tally of seats -- not only from the boastful projection of 150-plus which it expected to win, but also from the 115 it won in 2012.

There was no mention of the fact that the BJP was finding it difficult even to touch, let alone cross, the psychologically important 100-seat mark.

It is understandable that the party will choose to highlight its success in retaining power instead of focussing on the shortfall in the number of seats.

But what this deficit shows is that the much vaunted Narendra Modi wave is showing signs of faltering, if not of ebbing.

The reason for the weakening of the prime minister's magic is not far to seek.

The primary cause is the dissatisfaction among the Patidars, Modi's strongest base over the lack of employment opportunities despite the tall claims of the Gujarat 'model'.

As is known, this discontent was heightened by, first, demonetisation which especially hit small and medium businesses and, secondly, by GST which was the final crippling blow for them.

It has to be said that the BJP has shown considerable political resilience in being able to overcome these two severe disadvantages to be able to retain power.

But by holding on by the skin of its teeth, it has revealed its vulnerability, which cannot but undermine its confidence not only in Gujarat, but also in the context of next year's elections in the three BJP-ruled states of Rajasthan, Madhya Pradesh and Chhattisgarh where the Modi magic will be needed to cast its spell even more vigorously than it did in Gujarat to stymie the anti-incumbency factor.

Any setback in the three states on top of the BJP's lacklustre showing in Gujarat will mean that the party will look to the approach of 2019 with dread.

In Gujarat, it might have fared better if several individuals did not appear all at the same time on the opposing side to reap political dividends.

First among them was the young Patidar leader -- too young even to contest elections -- Hardik Patel, who proved to be surprisingly articulate and energetic to offer a stiff challenge to the ruling party.

His arrest on the charges of -- what else? -- sedition did not deter him.

The two others included Jignesh Mewani who emerged from the brewing of anger among the Dalits following the assault of a group of Dalits by Hindutva storm-troopers for skinning the carcass of a cow, their traditional occupation, and the backward caste leader Alpesh Thakor, the only one among the three musketeers who joined the Congress.

But the godsent for them was Rahul Gandhi's transformation into a politician ready and willing to take on Modi and his success in playing the role which was attributed to Sonia Gandhi in 2004 -- that of bringing together disparate elements to oppose a common enemy.

If Rahul's surprising metamorphosis did not take place, the three young men would not have been able to make any headway in revving up the election scene and galvanising the moribund Congress.

Rahul himself proved to be so effective as a speaker that Modi had no option but to brand his challenger, who is 20 years younger than him, as Aurangzeb while his camp followers named Babur and Alauddin Khilji to link the Delhi 'sultanate', Modi's term for the Nehru-Gandhi dynasty, with the Muslims.

If the Gujarat contest has achieved anything, it is to clear the ground for a Modi versus Rahul confrontation in 2019.

Nor will it be a battle of unequals as it might have been thought even a few months ago, but one on more or less a level playing field because the Gujarat outcome cannot but breathe new life into the Grand Old Party all over the country for having almost succeeded in bearding the lion in its own den.

The lion, on its part, will be licking his wounds which the BJP's success in Himachal Pradesh will do little to assuage.

Modi's problem is that there is no one else who can share his responsibilities as the 'star' campaigner.

Moreover, he needs unqualified success in politics and in the economy to be in the forefront.

But if the party stumbles as in Gujarat, and the economy fails to take off, no invocation of Aurangzeb or branding a former prime minister as virtually a traitor will save it.