The idea of justice in India is indeed vague 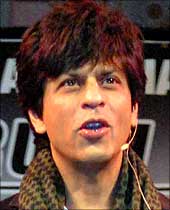 Actor Shah Rukh Khan gets held up at New Jersey Airport for two hours (one hour, six minutes if you were to believe US Immigration). The nation is seething in anger because a) he is a Muslim and it could be racial profiling and b) he is a superstar. Lots of Khan and non-Khan Indians must be getting held up. But they are not superstars. And they don't know Hillary Clinton. The question here is: Is the detention of SRK unfair or unjust or both? Or neither? If so, why?

What if I am detained for two hours at US Immigration during my next visit there? As a journalist, I could call a few people too. It's possible they might not respond with the same alacrity, if at all. I could drop a few names. "I had tea (in a small group just in case) with America's first Director of National Intelligence. Well, he wasn't the chief then. But I still met him. Oh I remember, I have interacted and interviewed his younger brother extensively. Gosh, he might even remember me."

Would that help? What about my detention then? Would it be unfair, or unjust? After all, you are detaining someone who now knows the former Director of National Intelligence and his brother, an individual of some repute.

It's a frequent occurrence on Mumbai's packed roads. A Maruti Gypsy with yellow lights flashing and sirens blaring appears out of nowhere, rudely nudges my car (and all others) over to the side and zooms ahead. The policemen seated at the back of the Gypsy give me the glare which says: "Don't try and overtake usor else." The vehicle being escorted is usually a top-end SUV. Not quite an ambulance. Why should I get nudged out? Is it unfair, unjust, both or neither?

And finally, as I am sure you are getting the drift, the last one. I am an occasional visitor to Mumbai's Hard Rock Cafe restaurant in the heart of Mumbai's once humming textile district. Every time I drive out, I am struck by the absolute contrasts. The pavement across the road is lined with densely packed slums. My biggest concern is heading home and clearing my head of the smoke and alcohol fumes. For the people sleeping on the road outside, presumably there are bigger challenges in life. Should it be this way? Is it unfair, unjust, both or neither?

Professor Amartya Sen did not say there was one single reason for his propounding his Idea of Justice theory when I asked him as much in an interview the week before. The Bengal famine is said to have influenced many of Professor Sen's thoughts and approaches. Yes, he said, in a way. But the idea also developed over time. I think it was at the London School of Economics where he said last month: "I remember my son when he was three complaining that his sister was not being 'just' to him!"

I asked Professor Sen whether he felt young Indians were in sync with the idea of justice as he saw it. And it struck me, as Sen answered the question, that Young India actually lives on with the most amazing amalgam of principals and values. Where justice and injustice have little or no co-relation to our real lives or that of others. Where denial of a right to education, livelihood or food has no bearing on our notion of justice.

It also struck me as I was posing this question to Professor Sen that the idea of justice in India is indeed vague. We feel incensed about former President APJ Kalam's frisking at New Delhi airport but don't react as strongly or care about the fact that most children in the city or town you live in will not have a proper education. Here's a hint, try asking the domestic help at home whether the children in their homes are going to school.

Professor Sen concurs that the idea of justice is something that needs to be inculcated at an early age. I couldn't help thinking. How does a school-going child view poverty, malnutrition and illiteracy? As a problem, a nuisance, something to be sad about, something to feel happy about ("because I have cereals for breakfast and travel in my dad's car") or the reflection of injustice in society?

I reckon we all know the answer. Frankly, we don't care. Even if we do, it's an academic problem for someone else to resolve, like the government. Solving a problem requires an appreciation of it. And an understanding of what is 'right' or 'wrong'. What is just and unjust? The millions who sleep on the streets of Mumbai, the children begging at the traffic signals -- sound like a politician rallying for votes, injustice or a pointless narration of someone's personal misfortune. Or is it the "Idea of Injustice"?