'One is forced to wonder whether Modi is serious about all the bills people want him to pass. Because to me he has made no real honest effort at getting things moving legislatively,' says Aakar Patel. 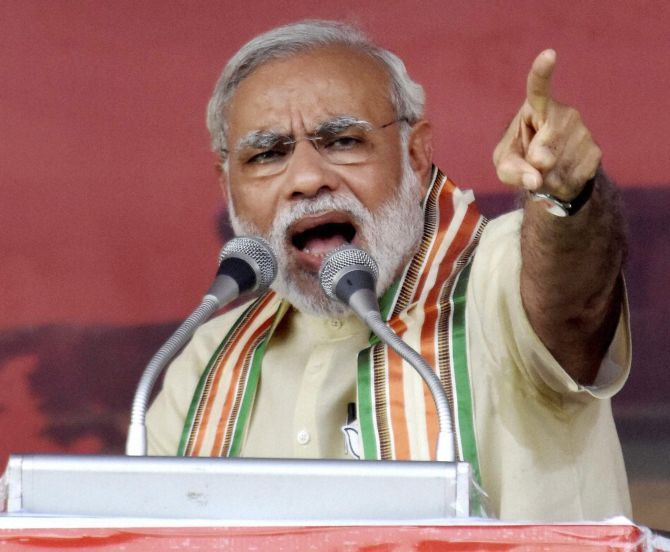 How serious is the Narendra Modi government about reforms?

I am asking this question as neither someone in favour of what passes for 'reforms' in India nor as someone opposed to them.

Frankly I am not interested in any of that and I do not think that the biggest things that are wrong in India can be sorted out by legislative action.

I could be wrong about this, and I accept that. It is undeniably true that many people set great store by reforms and were looking to the Modi government to produce miracles, or at least bring about big change, through these reforms.

So why have they not happened?

The two things Modi's supporters in media and business had expected to go through in the last session of Parliament were the land acquisition law and the new goods and services tax. Neither of them happened.

The reason is, of course, that Congress blocked Parliament for most of the session, before (in my opinion) inexplicably agreeing to a debate that they had been opposed to all this time. After the 'debate' -- assuming shouting by one side and then by the other is debate -- nothing much happened and neither of these two laws was passed.

Later, Modi announced that he was withdrawing the land bill, though it was not clear whether this was because he thought now that the bill was flawed or merely because it did not have support.

My question is: how serious is Modi about reform? And the reason I am asking this is that events indicate that he is not very serious. Last week, he had an exchange with the Congress President Sonia Gandhi. She used the word 'hawabaazi' (verbal fireworks) to describe what she said was Modi's style of functioning, which was all talk and no action.

Modi responded immediately. He said those accused of 'Hawalabaazi' (illegal transfers of money outside the country) should not dare to lecture him.

The exchange showed something which has been obvious to many for a long time: That Modi is very good at the cut and thrust of electoral politics and can come up with very memorable phrases. He is aggressive and sharp when it comes to campaigning.

What is good politics, however, is not necessarily good governance. The Congress is doing whatever it can to remain politically relevant. It has little political credibility at the moment.

Its disruption of Parliament was not ethical, not founded on any particular principle and was totally unjustified. But it was very good politics. It made the party relevant, both politically and in the media, after a year when it was irrelevant.

Sonia and Co only occupy space in the news cycle through disruption and wordplay. The Congress is too small to do anything else.

Knowing this, as Modi surely does, there are two options before him. The first is to let the Congress dictate the terms of engagement. If they attack him, he will shout back, saying clever things that are aimed at his supporters.

Precisely this happened during that short debate in the Lok Sabha, when Sushma Swaraj came out and absolutely blasted the Gandhi family, including those who were dead. This gave her one day of good media reports, but it effectively killed the monsoon session.

Modi should have known that, and this means he chose to go on the attack rather than save his bills. After this, Modi accused the Congress of being anti-development.

If this is his strategy, then it assumes that the Opposition will wilt under pressure from the media as Parliament is deadlocked. I do not think that is a wise strategy because, as I have said, the Congress receives oxygen from being disruptive. It has nothing else in its quiver and Modi's 'anti-development' allegation has not caught on.

The second option Modi has is to compromise with the Congress and offer it some sop to get his agenda through. Perhaps an investigation, if not a resignation. Here there is a personality issue.

Modi, in my opinion and experience, cannot resist flinging back the jibe. He is unable to ignore or swallow any sort of humiliation, as Manmohan Singh was so often willing to do. If Sonia says something about him, he will give it back.

The result of this is that there is no reaching out to the Congress to get bills passed and there seems to be no indication that Modi is changing his approach.

Perhaps this is temporary and will all end after the Bihar election is over. It could be that Modi is still in election mode and waiting for that one final hurdle before getting down to seriously looking at his legislative agenda.

If not, then one is forced to wonder whether Modi is serious about all the bills people want him to pass. Because to me he has made no real honest effort at getting things moving legislatively.