'The scope of cordon and search operations has changed drastically.'
'Operations are now more focused, intelligence driven and involve very small cordons with minimum inconvenience to the people.'
'This has been the humanisation of conflict.'
It has come to be institutionalised in the army's concept.'
'General Rawat has been schooled in this thinking and when he makes a statement it is with full consciousness of the institutionalised concept,' says Lieutenant General Syed Ata Hasnain (retd), the former GOC 15 Corps in Srinagar and the officer acclaimed as the 'People's General'. 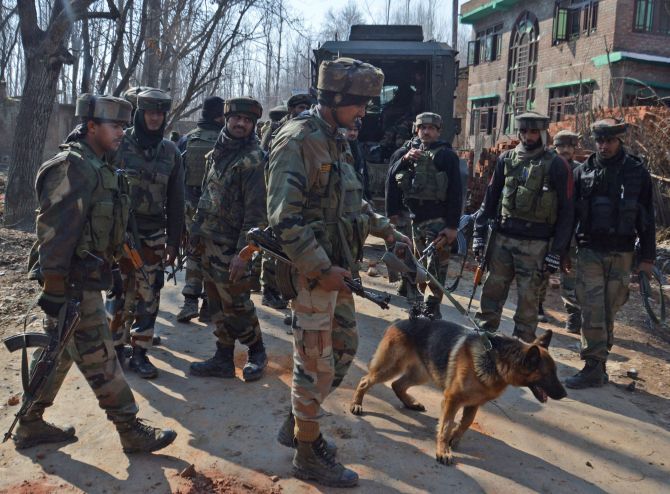 IMAGE: Soldiers conduct search operations, February 12, 2017, after four terrorists, two army personnel and a civilian were killed in a fierce gunfight in a village in south Kashmir. Photographs: Umar Ganie

The Army Chief's remarks at a recent wreath laying ceremony are too well known to reiterate. Yet a brief backdrop to the same will help.

In three terror-related incidents in the Kashmir Valley, senseless interference by flash mobs at encounter sites resulted in the diversion of focus from the ongoing operations, leading to the loss of six lives of soldiers against eight terrorists killed.

In an environment surcharged by separatist propaganda this phenomenon has been happening since 2015; a new found tactic to protect terrorists and enable their getaway, an adaption of the street protests to the advantage of the terrorists.

In 2015 I did predict that it would finally come to a head, someday. In the interim the army, CRPF and JK police had found temporary answers through some well-crafted SOPs but this could not last.

The Army Chief, a veteran of many encounters in Sopore and Baramula, in empathy with the challenges his officers and men face, and made no bones about the fact that the army would no longer accept such interference by mobs and would take tough measures against those who indulged in acts which were not in support of the security forces.

Neither was this an intemperate remark nor a sanction for freedom to his troops to be indiscreet. It wasn't even a warning, just a message that the army may not stand still next time it is targeted.

For those less initiated on these issues the Army Chief's remarks cannot be taken at face value, but given the sharp political divide perceptions will be taken as per convenience.

From the utterances on one side of the divide it appears as if the Army Chief just gave a license to his officers and men to go berserk, be inhuman and generally act the rogue most armies do in such circumstances.

Perhaps to understand the Army Chief better it is best to explain the Indian Army's concept of operations and the separatist methodology, to get a measure of what the status of the current environment in Kashmir really is.

The Indian Army has progressively softened its operations as the strength of the terrorists dwindled. 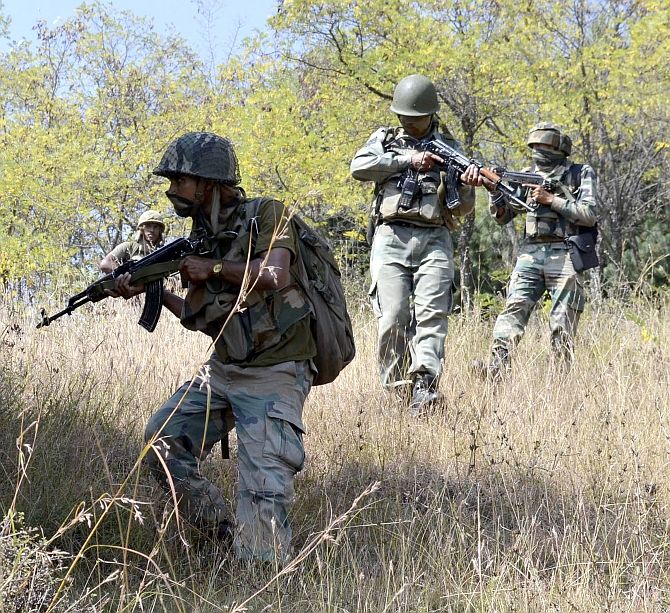 The concept still revolves around strong counter infiltration at the LoC belt, search and destroy in rural and jungle terrain, precision intelligence based counter-terrorist operations in semi urban and urban areas, secure lines of communication and most importantly, conduct of people friendly operations.

The last is the most important. As the situation improved over the years the scope for people friendly operations increased as did the leeway for restoring dignity to the people.

The scope of cordon and search operations has changed drastically. Operations are now more focused, intelligence driven and involve very small cordons with minimum inconvenience to the people.

The change has even gone to the extent that collateral damage in the conduct of such operations is minimised even at some risk.

Attempts are made to flush the terrorists out and not raze houses to the ground with help of rocket launchers and explosives as was done in the past.

This has been the humanisation of conflict. It has come to be institutionalised in the army's concept.

General Rawat has been schooled in this thinking and when he makes a statement it is with full consciousness of the institutionalised concept.

Since 2015 the Indian Army's Victor Force in South Kashmir in particular had observed the change of tactics by the terrorists which were obviously under the guidance and supervision of sponsors from across the LoC.

Temporary solutions to this were found through joint coordination between the army, CRPF and JK police. Only minor casualties were suffered due to the efficacy of the SOPs established.

However, in the three recent encounters, which have all been in North Kashmir, there appeared a pattern of very intense disturbances by flash mobs resulting in fatalities suffered by the army.

It is the army which does the close in and flushing out operations, hence its casualties.

From 2008 the army has witnessed mobs; some of its vehicles have even been burnt.

In 2010 when S A S Geelani threatened to gherao army camps it was the threat issued by the GOC 15 Corps which stood him down and the mob violence ended that year.

In 2016 the army itself did not suffer much damage although its operations were severely affected due to the impact on the police. In stray incidents army vehicles were targeted and it killed at least three civilians in one incident near Qazigund. In September 2016 when the decision to induct two brigades into South Kashmir was taken I wrote a piece of advice. It was on the lines that the one thing the army could not afford was the loss of its moral high ground; it was always correct in its approach to the conflict.

The soldiers did not disappoint me as I had reports of stone throwing in Shupiyan town while the army was conducting a medical and vet camp for the local people three km away at their camp at Balapur.

This is the moral high ground I referred to. However, this can all be upset by intemperate behaviour of the locals instigated by leaders who have no qualms about the effects on the lives of ordinary Kashmiris.

None of what the Army Chief has said will adversely affect any of this moral high ground. The army will continue doing all this and even more just as right through the current most adverse winter in 25 years, it has kept its tempo of engagement activities with youth and others at a high pitch.

What it will definitely do is that along with the CRPF and JK police it will get to be much more pro-active in offsetting disturbances by detention of rogue leaders who instigate mobs.

The army will still rescue women in the family way from remote villages, help victims of accidents or natural calamities; none of it will change because the concept of operations remains the same, the Army Chief hasn’t said he is changing any of that.

So what is the hullabaloo about?

It is all about the convenience of interpretation. The only mistake General Bipin Rawat made was that he did not organise a lecture on the concept of army operations, for political leaders and the media in Kashmir, to educate them. There is no doctrinal change either.

The army chief's words have given a little more freedom to the field commanders to make their operations a little more 'mob proof.'

How will that be done?

Perfectly situational, as the commanders on the ground will assess, ideate upon and come to their deductions; just as they did earlier in South Kashmir.

So the perfect storm raised is only due to political reasons and for the purpose of a little rabble rousing by the separatist ideologues and their supporters.

The 'experts' who love to advise the Indian Army and deeply suspect its military intellect are most upset because apparently the Army Chief's words have conveyed as if the entire Kashmiri awam is its freshest target.

The traditional army baiters and bashers were at it on the television channels and all those who have a practical orientation to operations and outreach in the valley were the targets.

One could almost hear the Pakistanis snigger at the plight of the Indian Army. Democratic India perceives that the best demonstration of democracy is to demonise its army.

People who have never seriously looked at the domain of information as a weapon are suddenly telling the army that its chief must be temperate while its field commanders can say and do anything.

Honesty and straightforwardness has a price. Those who say that the army's casualties haven't been even a small percentage of those suffered in the 1990s must surely be living in cocoons.

In a world driven by social media and the information revolution thank God the army at least is mindful of its casualties, others could be damned.

Having said all the above, the bottom line has to be the fact that the army needs to recover from the successful onslaught of negative propaganda unleashed by unthinking quarters.

It needs to redouble its outreach the way only it has an understanding to do so.

Its knowledge of the sensitivity of the Kashmiri people is beyond doubt and only it can lead the programme to educate the youth that what they do is against their own interest.

Instead of stones there must be books in their hands.

Instead of the skill in aiming stones they must have the skill to work technical equipment and repair it when needed.

Instead of organising endless protests they must have the ability to experiment with their entrepreneurship.

In short, they must be the masters of their destiny to a better life shorn of hatred.

The Indian Army will stand by them in their ventures; they and everyone in the valley know that well enough.

Only it is a little difficult to acknowledge which side their interests lie.

MUST READ General Hasnain's earlier columns in the RELATED LINKS below.