The population in Gaza has, for almost a decade, been facing Israel-created ‘blockage’ from the rest of the world. The isolation has given rise to tunnel phenomenon, an underground route for the procurement of essentials, says Ajey Lele 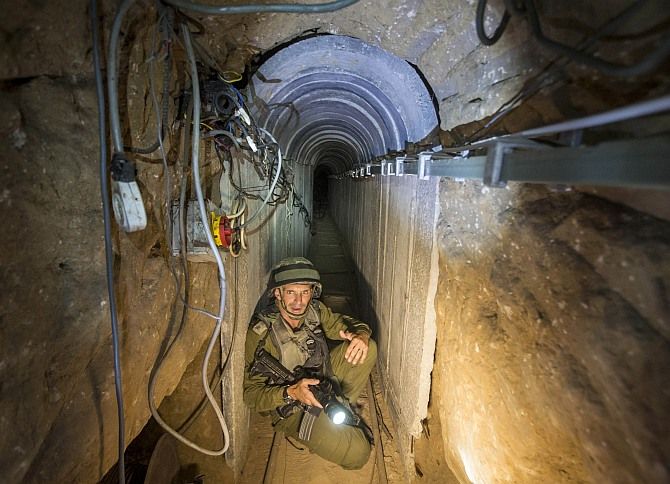 Presently, social media could be best platform available for conducting information warfare. With Gaza Strip ablaze, significant amount of information is found being ‘fed’ on this platform.

Coverage: The war in Gaza

At the same time there is no reason to suspect that all available information is only propaganda.

There is bound to be some truth in the information projected by both Hamas and Israel, may be in certain cases the truth may lie between both the extremes.

However, in case of the issues related to underground tunnel network built-up in Gaza, very little could be left to imagination because of the availability of the photographic and video evidence.

Also, some journalists have visited such tunnels hence there is little to disbelieve.

Nivolas Pelham, a writer on Arab affairs and the one who has reported on Gaza for many years, has published an academic paper during the summer of 2012 in the journal published by The Institute for Palestine Studies on Gaza’s Tunnel Phenomenon.

This paper presents very many details about the tunnel network in Gaza.

Also, there are few other articles available providing some details about the tunnels.  All these perspectives analysed at the backdrop of some factual information could offer an account somewhere closer to reality.

Also, there is 40 km coastline, but it is under Israeli control.

The climate for this place is mild winters but otherwise mostly hot and dry weather with hardly any rain.

The terrain is flat to rolling with sand dunes close to coastline.

Broadly, the topographical features and climate conditions are not unfavourable to tunnel building.

The geographical features indicate that probably no heavy (high-tech) machinery is required for tunnel construction.

Also, not being rocky a terrain and region mostly constituting of loose subsoil the process of construction would not have demanded any blasting operations.

It has been reported based on the interview of a tunnel worker that, these tunnels are constructed by undertaking drilling via a mechanical device (not an electric one) to avoid making noise and hence the detection.

It is important to appreciate that the tunnelling activity in Gaza has its origins directly linked to the survival of the domestic population there.

The population in Gaza has, for almost a decade, been facing Israel-created ‘blockage’ from the rest of the world.

They have virtually no rail, sea or air routes available to relate with the rest of the world.

Oil, food, medicine nothing can reach these people from the outside world. The universally implemented export-import economic model by which a nation/community operates to fulfil their economic needs has not been allowed to evolve.

All this isolation has given rise to tunnel phenomenon, an underground route for the procurement of essentials.

Particularly, ever since this region has come under the control of Hamas, the Palestinian militant Islamist organisation in 2007, the tunnel phenomenon has grown significantly and has emerged as a major driver for Gaza’s economy.

These networks of tunnels operational in Gaza are also being used for clandestinely importing arms and ammunitions by Hamas to fuel their fight against Israel.

It is also believed that some functional and non-functional tunnels are used as hideouts for the terrorists and also as storage for the arms and ammunition like missiles etc.

Also, in some cases the tunnels are known to have become sanctuaries for criminals form Egypt.

The ongoing Israel attack (July-Aug 2014) on Gaza has a politico-military aim of destroying this tunnel network.

Tunnel is not a new phenomenon in this region and Israel’s first recorded discovery of tunnel dates back to 1983.

The tunnels which are dug in Gaza have their openings mostly in Egypt and some in Israel. These openings outside Gaza are difficult to trace and in many cases they open into the houses of the sympathisers or business people.

Normally, the area of tunnel operations is around eight kilometres. Tunnels are often as deep as 20 meters below ground and few are even deeper.

Because of the space problem on occasions two tunnels are found built around on a similar route one below the other (they use Google Earth to map routes).

It is difficult to pinpoint the exact number of tunnels however; there could be hundreds of tunnels of various sizes and lengths.

The expansion of tunnelling network and up gradation of the existing tunnels is an ongoing process.

Many tunnels are reinforced with concrete and equipped with electric supply and phone lines.

Also, there are few tunnels equipped with tracks for movement of small rail systems and some having roads, capable of undertaking vehicular traffic.

Hamas has converted the entire tunnelling network into a commercial enterprise.

Their Interior Ministry has established the Tunnel Affairs Commission. People have put their money towards the construction and development of the tunnels, and many of them are jointly owed as business ventures.

Mosques and charitable networks also are expected to have some direct/indirect investments. Hamas has established procedures for tunnel operations and taxes are also collected routinely.

Following is the diagram giving a broad idea about the tunnel networks: 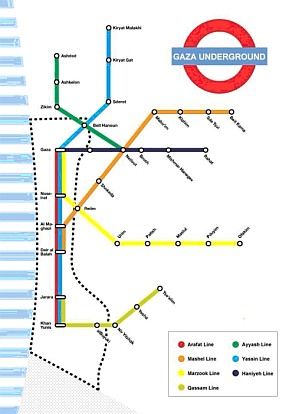 The cost towards building the tunnel has been projected approximately as US$ 80,000 to US$ 200,000. Each tunnel is run by a partnership on each side of Gaza-Egypt border.

Normally, the investors are known to recover the cost of construction very quickly owing to the share of profit earned on running the business via tunnel. It has also generated employment for the local people.

The types of the tunnels depend on size as well as the function for which it has been used. Some are used totally for commercial purposes and some have military utility for Hamas.

The Izzedeen al-Qassam Brigades, the armed military wing of Hamas has a major say in the management of tunnel activities. It is interesting to note that the tunnel business is used by the traders at times to control the economy of the region.

Intentionally, artificial shortages of items are made by controlling the demand-supply requirements. Similarly, by increasing the supply, prices are brought down.

Overall increase in number of tunnels is good for the local people because more the tunnels available more the traffic of goods is possible and hence lesser the cost of the items.

Also, political situation in Egypt and the market value of items in that market directly impacts the economy in Gaza.

At times, the political chaos in Egypt and adjoining regions has proved to be beneficial for Gaza.

Since, there are no red tapes/rules on what to import in tunnel business many items are smuggled easily to Gaza. For example, abandoned cars after the Qaddafi’s ouster in Libya made their way to Gaza market.

Presently, the question is, ‘If all this about the tunnel business was known the why did Israel kept quiet for so long?’

The tunnel commerce has helped Hamas to consolidate its position and avoid any form of social unrest within.

For rest of the world Hamas may be a terrorist organisation but, the locals have elected them through a democratic process. Naturally, much is at stake for them.

The amount of missiles currently they are launching on Israel indicates that during last few years they have succeeded towards increasing their military strength and ‘tunnel’ has worked as one of the instruments to achieve that.

If the tunnel economy had not succeeded in all these years, then in all possibility people in Gaza would have starved to death. This would have resulted into the global condemnation of Israel for their Gaza policies.

Probably, this is the reason why Israel kept quiet for all these years and allowed the existence of tunnels. But, now with increase in violent activities of Hamas, Israel is thinking differently.

During last month or so Israel have major successes in shielding their population against Hamas rockets. Today, they are successfully neutralizing these attacks by using Iron Dome anti-missiles system.

However, after they have launched the ground offensive in Gaza they are increasingly finding it difficult to identify the locations of the tunnels. Hence, they have not yet succeeded towards destroying the nerve centre of such attacks.

Presently, there is no exact technology available to locate these tunnels and Israel is found using various methodologies on trial error basics to trace them. Radars have been put in use for tunnel identification and also multichannel analysis of surface waves and methods based on microgravimetry (based on minor various in gravity) are been tried.

Israel has come under heavy criticism for killing civilian population, including children in this conflict. But, they are also highlighting few 2012 reports which claim that Hamas was using child labour to construct tunnels and at least 160 children have been killed in the tunnels during the construction phase so far.

It appears that Israeli ground forces have a very tough task in front them and the threat is totally asymmetric in nature.

It would require much more time and efforts to destroy the entire tunnel network.

The question is would Israel succumb to the international pressure for halting the war? If they agree for cease-fire and suspend their ground offensive then the tunnel network would remain only partially crushed.

Image: An Israeli army officer gives explanations to journalists during an army organised tour in a tunnel said to be used by Palestinian militants for cross-border attacks
Photograph: Jack Guez/Pool/Reuters