From jogger to birdwatcher

'As the sun rises, so does my acquaintance with the neighbourhood's avifauna,' says Kishore Singh.
Illustration: Uttam Ghosh/Rediff.com 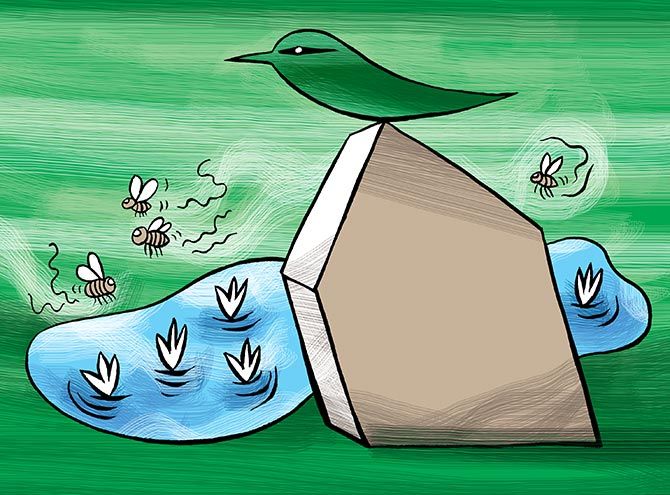 If you wake early, as I often do, you get to see some extraordinary winged creatures that disappear as soon as the sun has skirted the horizon.

The ones that frequent our balcony are tiny with long beaks and midnight blue feathers that I am tempted to describe as humming birds.

They feed on blossoms on trees, but never on the silly sort of flowers my wife grows in pots.

Because they are rarely still, I haven't been able to take their pictures, though I did manage to photograph a tiny green bird with a black slash around the eyes that seemed to enjoy posing and wasn't the least bit nervous.

It was sitting on a fence against a backdrop of ficus leaves, so it's difficult to spot even in the picture, which is why I can tell my pre-dawn peregrinations are turning me into a naturalist.

As the sun rises, so does my acquaintance with the neighbourhood's avifauna.

I tried to explain to my daughter that they were calling "Did you do it" on a rapid loop, to which she suggested I was suffering from a hangover.

She's either tone deaf or bereft of a romantic bone in the body.

At least the call of the koel -- or I might mean the brainfever bird -- is musical.

It can be excessive though, which might be why some people find it annoying.

The neighbour's house attracts a family of peacocks that strut and preen on the parapet, which annoys my wife because we only get monkeys who are prone to trashing her greenhouse.

Because of our proximity to the river, I can spot the occasional kingfisher, which I remember used to be more plentiful in my childhood.

The river is the reason for the number of eagles we see soaring in the air currents looking to spot any prey they can find in the fields.

My maali says he keeps the water level in the lily pool low so they don't make off with the koi carps, but I think he's just lazy and couldn't be bothered filling it as frequently as it keeps evaporating in the heat.

The pool attracts dragonflies, but these days it's bees you see staggering around drunk -- they seem partial to some of the creepers that bloom abundantly in the harsh sun.

There are other species of birds I can never tell because they're dowdy and, therefore, uninteresting.

A mousy one with a long tale often hangs around, but it's the return of the sparrows after an absence of several years that is particularly heartwarming as they peck on seeds, or insects, picking their way across the lawn.

My son's balcony, though, is infested by pigeons, some of whom roost on his air-conditioner, and their hygiene habits being disgusting, he must resort to having the gas refilled every few weeks.

What's turned me into a birdwatcher?

Well, dear reader, I wake early to go for a walk my son insists on imposing on me while he snoozes in bed.

My remedy has been to put on jogging tracks and shoes, throw some water on my clothes, and pretend to slump exhaustedly in a chair as I wait for the newspapers to be delivered -- while nature takes its course.