Whatever the circumstances the cadres will not let themselves be seen as challenging ‘MGR’s symbol’. It’s an emotional identification for most of them, and many consider it an ‘eternal sin’ for them to defy ‘Two Leaves’, says N Sathiya Moorthy. 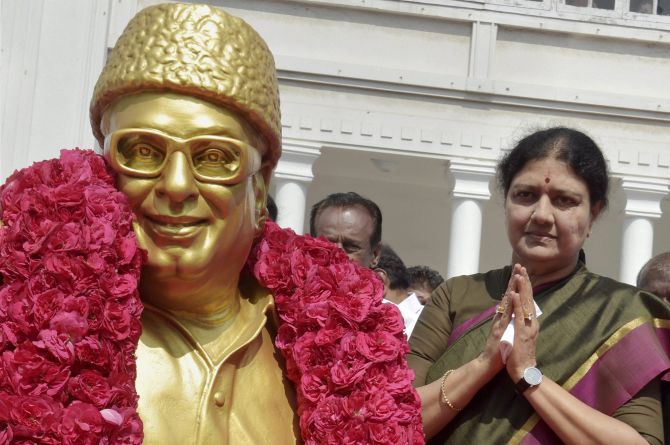 Media reports/speculation about an imminent cadre uprising against the ruling AIADMK’s new and seventh general secretary-elect V K Sasikala notwithstanding, there is nothing to suggest that such threats, even where genuine, have little chance of throwing a huge challenge to the emerging leadership.

In a way, any immediate challenge from the existing ranks of second-line leaders, into which Chief Minister O Panneerselvam has identified himself, too may not have much worth.

“We will make even our detractors follow us,” Sasikala told party leaders after taking over as Jaya’s ‘political successor’ at the AIADMK headquarters, gifted by founder M G Ramachandran, in Chennai’s busy Royapettah locality. The party would continue to run with the same ‘military discipline’ as under Jaya, Sasikala said, “For Amma, this party for her life. For me, Amma was my life.”

Sasikala targeted forces ‘conspiring’ against the party post-Jaya, to ‘create havoc’ during this hour of ‘distress in our lives’. Despite the poor cadre turnout at her ‘inaugural’ as party chief, indicating disenchantment to an extent, it was clear that she was not talking about ‘insiders’ but possibly about ‘outsiders’ of the ruling BJP at the Centre.

It’s not without reason. The trust in the party for them, and thus in the cadres, for Jaya earlier and Sasi now, owes to the strong cadre-belief that the ‘Two Leaves’ electoral symbol of the party ‘given to us’ by AIADMK founder and charismatic actor-politician M G Ramachandran, MGR, should not be allowed to wither away.

It holds equally true of the cadres who had joined and worked for the party selflessly under MGR’s successor and political heir, the late chief minister and AIADMK supremo, Jayalalithaa.

Nor would the cadres let themselves be seen as challenging the ‘MGR symbol’ whatever the justification and/or circumstances. It’s an emotional identification for most of them, and many still consider it an ‘eternal sin’ for them to be seen defying the ‘Two Leaves’ symbol.

Shooting in the air

Those who seek to draw a parallel between the post-MGR emergence of Jaya, and also to the absence of such charismatic leaders in the AIADMK as the two just now, seem to be shooting in the air.

Jaya was not the readily-accepted leader of the party. Rather, a majority of the legislators, chaperoned by senior MGR aides and ministers like R M Veerappan and assembly speaker, P H Pandian, had sided with MGR’s widow, Janaki Ramachandran, for the chief minister’s job.

After the Centre had dismissed the short-live Janaki government over the assembly melee on the day the chief minister sought a confidence-vote, both factions lost the 1989 assembly elections badly.

The Janaki faction came poorer than the one led by Jayalalithaa, but the split in the ‘MGR votes’, and more importantly, the Election Commission’s freezing of the ‘Two Leaves’ symbol, alone had helped MGR’s bête noire and DMK supremo M Karunanidhi return to power after a 13-year vanvas, as the latter himself admitted.

Or, that’s how AIADMK insiders and veterans saw it at the time. Their aim thus was to bring the two factions together, and win back the ‘Two Leaves’ symbol.

That having been achieved, the AIADMK cadres believed that the re-unified party’s 1991 electoral victory in the company of the Congress (that too at the height of the Rajiv Gandhi assassination!) owed mostly to the return of ‘MGR’s symbol’.

Today, in the changed circumstances, any split still in the AIADMK, now or later, leading up to any possible freeze of the party symbol could bring the cadres together -- and not necessarily against the Sasikala leadership, or whoever is there at the helm.  It’s emotional bondage that they cannot sever.

Left to themselves otherwise, some of them might still choose to ‘retire’ from active politics if Sasikala were to take over the party, as has already been ordained by the AIADMK general council at its first post-Jaya meeting at Chennai on Thursday.

One other possibility of disgruntled cadres still voting for the party though not working as effectively as under MGR and/or Jaya is the possibility of the AIADMK losing the state-wide local bodies polls, stalled by the Madras high court at the last minute.

The poll dates, the AIADMK’s candidates’ list for urban, semi-urban and rural councils, and the subsequent court stay, all occurred when Jaya was in hospital. The poll-date decision and the party list all had the ‘Sasi stamp’ return all over.

There was no extra-protest against the choice of candidates than when Jaya or even MGR was around. Considering that the village-level local bodies in particular catered to the personal aspirations and identifications of lower-level cadres, the deafening silence was an acceptance of the emerging reality, whether or not they accepted it happily.

Possibly, the second-line leadership now kow-towing the Sasikala line is well aware of the sensitivity and sensibilities of the cadres to the ‘MGR-Jaya symbol’. It’s an element that they would readily use for ‘emotional blackmail’ to fall in line, as and when required.

Otherwise, the second-line does not seem to be looking at their own re-elections in the assembly polls that are due only in 2021 and the Lok Sabha elections, two years ahead in 2019.

They seem to have concluded that they need the party first to get elected, and would have to move away from the ‘Jaya charisma’ to something more real and immediate, to keep the AIADMK together, through the next four years in office.

Sasikala may or may not be the best of choice even in the eyes of some/many of them, but they are left with none else, either. The MGR-Jaya autocracy has ensured as much.

What the second-line is looking at just now is for (s)he who is the least unacceptable to the rest of them all to keep the party together, as against someone more acceptable to the cadres, first, and the larger voters, later on.

There is none else in sight, after all -- though, overall Chief Minister OPS has become as much visible as Sasikala in the past. But caste, sub-regional and second-line leadership equations do not make him readily acceptable to other factions, which are however yet to emerge, post-Jaya.

Rather, they had never considered Panneer to be the ‘first among equals’ when Jaya was around, for them to consider him one post-Jaya. Having stayed in the background through her 30-plus years of association with Jayalalithaa, and yet controlling the levers of the party and governmental organisation de facto, Sasikala has greater acceptance than all others put together, just now.

It’s another matter if OPS would readily accept Sasikala as CM, if she were to target his job next. Then again, there would be those in the party who would readily argue (Sasi’s case) that twin power-centres are alien to the Dravidian political scheme, since the days the late C N Annadurai remained the parent DMK’s supremo and state chief minister after the 1967 elections that the party had won.

Either way, the AIADMK is not unlikely to focus on performance and good governance in the early months and years of the post-Jaya era, though individual leaders and ministers are not unlikely to go their own way, if they decided otherwise -- in terms of their own electoral future.

Post-Jaya, the OPS government did better in handling the post-Vardah cyclone relief in the state capital of Chennai and suburbs, compared to the Jaya leadership’s handling of the historic floods in the metropolis in 2015.

What’s more, ahead of the recent tax raids, including on former chief secretary P Rama Mohana Rao, Panneer and his cabinet colleagues, especially those in charge of cyclone relief, became accessible to the victims and the local media alike -- unlike in the days of Jaya.

Whether they would project it as an achievement of the party government or that of the Panneer leadership personally remains to be seen. A lot would depend on what Sasikala thinks for herself and about herself, over the short, medium and long term, considering especially that there is the Supreme Court verdict in the ‘wealth case’ in which the Bangalore trial court had sent her to prison along with Jayalalithaa.

It can still be argued that the exit of Jaya, and the ailment and age of DMK’s Karunanidhi, may have created a political vacuum for other parties and leaders to try and fill in.

With most regional and sub-regional entities having lost their credibility and vote-bank -- not necessarily in that order – and the Communists and Congress losing heavily in successive elections in the state over the past decades, the ruling BJP at the Centre may be the one hoping to make it big, in the emerging scenario.

But the Dravidian political mentality would be to ensure through unspoken agreements of an electoral strategic kind to sideline any emerging third force. One possibility would be for the DMK and the AIADMK to readily discard the BJP as a future poll ally, citing ‘ideological reasons’.

The AIADMK can readily do so, citing the two last elections Jaya had led and won, in 2014 and 2016, without caring for the BJP’s overtures. If they chose so, her successors could say that it was ‘Amma’s wish’ and they would not hurt her memories that way.

If they wanted to align with the BJP, whatever the reasons and circumstances, they would readily find a thousand and one reasons. That would depend on how far and how much the post-Jaya party leadership has settled down -- or, has been allowed to do so -- and about the relative popularity of the BJP and Prime Minister Narendra Modi, across the country.

The BJP instead would have to wait for their performance in the series of assembly polls elsewhere, between now and 2019. As the party in power in the state, and needling to settle down post-Jaya, the AIADMK would be buying time before deciding one way or the other.

The party would be the last of prospective allies before either of the two ‘Dravidian majors’, and only after they had built a comprehensive electoral alliance without the national party -- if only to bargain from a position of strength.

For now, possibilities of any noticeable rebellion within the AIADMK is getting minimised, especially after Jaya’s niece, Deepa Jayakumar, urged AIADMK cadres not to use her pictures in any of their propaganda material (against Sasikala’s leadership).  With this, Deepa seems to be clarifying that hers is a personal battle, not a political one -- at least, not just now.