Finding fault in the 'anti-rape' law 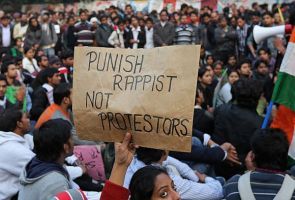 On April 2, when President Pranab Mukherjee signed the Criminal Law Amendment Bill of 2013 into law, I deemed it a victory. It was an anti-rape bill, after all! Even if it had left out crucial issues like marital rape, it was taking measures to reduce gendered violence. Like many women’s rights activists, I supposed the bill was a step in the right direction.

I realised that the bill’s weaknesses lay not only in its omissions but in its inclusions as well. Parliament’s decision to raise the age of consent, for instance, was clearly problematic and has received considerable attention and debate. But beyond this, even in seemingly benign provisions, I found problems.

Once clause of the bill stipulates that after a report of rape, preliminary information collection must be carried out by a female police officer. Considering that around 6.5 percent of India’s police officers are female, this clause is token to begin with. But even excluding this, the provision veils conservative values in its language.

Obviously, rape survivors would prefer a female police officer. But the insinuation that male officers simply cannot handle reporting in a sensitive, non-lewd manner shifts responsibility away from males in the force. A far more obvious solution to making the sexual violence reporting system less corrupt and more sensitive to women is to require all officers, men or women, to handle issues with more tact.

As Suman Nalwa, the woman in charge of the Delhi police’s special unit for women and children, puts it, “It would be better to have intelligent and sensitive officers who can handle all types of cases…I should get an effective response, irrespective of whether a police person is male or female.”

By not pressuring male police officers to be sensitive, decent, human beings, the Indian Parliament demonstrates its classic endemic bias that condones passivity and mediocrity in dealing with sexual violence. The response to a superintendant of police deeming a 35 year-old mother of four too “old” to have been raped should be to correct the policeman’s behaviour, not to search for female officers to pick up the slack.

Troublingly, the clause also entrenches a conservative gender binary. It frames rape as a ‘female problem’ rather than an issue all of society faces, and then places the burden of the solution on women, rather than on all people. On the net level, then, even a seemingly beneficial clause of the Criminal Law Amendment reinforces detrimental ideologies that hurt, rather than help, women.

How did this happen?

For part of the problem, look no further than President Mukherjee’s condolence message following the gang rape victim’s death. The speech used rhetoric that was detrimental, yet so commonplace it did not receive much media scrutiny.

‘The sanctity of a woman is a directive principle of that larger edifice called Indian civilisation,’ he declared. ‘The Vedas say that there is more than one kind of mother: birth mother, a guru's wife, a king's wife, a priest's wife, she who nurses us, and our motherland. Mother is our protection from evil and oppression, our symbol of life and prosperity. When we brutalise a woman, we wound the soul of our civilisation.’

President Mukherjee here was conveying his sorrow about the gang rape and murder. While I don’t doubt the sentiment, I want to question how we can expect any genuine government effort when the President expresses his sympathy with the same ideology that perpetuates a hostile environment for women.

Mukherjee’s speech encapsulates backward attitudes that marginalise women. Women in his speech still only exist relative to men, as their caretakers, their mothers, their wives. A woman is not a queen but a “king’s wife”. By Mukherjee’s rhetoric, the value of women only rests in what they can provide to men.

As Barkha Dutt pointed out in the 2013 Women of the World Conference, ‘Even when we as Indians are kind to our daughters, we are protecting them, not giving them freedom… what we’re seeing is… an entrenched cultural bigotry... that is like a benevolent dictatorship.’ This paternalism flows through Mukherjee’s speech, through Parliament, and into the legislation like the Criminal Amendment.

Women of India need freedom, not halfhearted attempts at reform. It already seems that the momentum and scrutiny encouraged by the brutal gang rape is beginning to dissipate merely because a new anti-rape law has been passed. But let’s demand more.

Indian women deserve a genuine and effective government response to the epidemic of sexual violence plaguing the nation.

Vedika Kumar, 19, is US born but follows Indian events with interest. She is entering her sophmore year at Columbia University