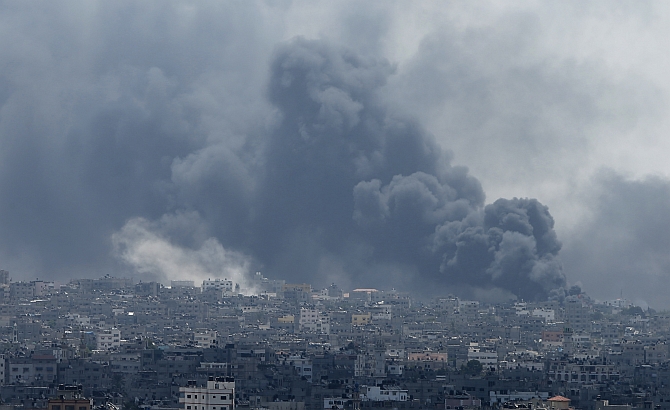 Eyebrows went north in India, especially in New Delhi where in the confusion some people criticised the United Nations Security Council which is based in New York. Chitra Subramaniam offers some perspective.

A special session of the United Nations Human Rights Council in Geneva adopted a resolution on Wednesday calling for an inquiry into human rights violations from Israel’s latest military offensive in the Gaza strip.

Eyebrows went north in India, especially in New Delhi where in the confusion some people criticised the United Nations Security Council which is based in New York. Here’s some perspective.

Since it was created in 2006, this is the 46th resolution against Israel at the UNHRC and India has been consistent in its voting on this issue. Palestine which is an occupied territory is a separate standing agenda item in UN language and India does not recognise the occupation.

When the gavel came down on the table, the resolution was backed by 22 members of the 47-member UNHRC, there were 17 including all countries in the European Union and one vote against the resolution which was cast by the United States.

When Dileep Sinha, Indian’s Permanent Representative to the UN in Geneva, told the meeting that New Delhi was “deeply concerned at the human rights situation in Occupied Palestine Territory including East Jerusalem…(and sought a) just and lasting settlement to the Arab-Israeli conflict (calling) upon both sides to resume negotiations leading to a two-State solution with a contiguous and economically viable Palestine State,” he was stating the Indian position which is a secure Israel and stable Palestine.

Israel called the meeting and the vote a kangaroo court. This is the ritual and has been so in the UN in Geneva or in New York at the UNSC which discusses armed conflicts and passes resolutions. Resolutions of the UN -- of which India is a founding member -- are high on moral pressure and low on teeth. They serve to build a case log that keeps lawyers, diplomats, NGOs and journalists busy and even gainfully occupied but they are considered gold standard as they have been developed over years, multilaterally.

In principle, India has always abstained from country specific investigations by the UNHRC as New Delhi believes they are intrusive and impinge on the sovereignty of the state. However, nothing is written in stone and in recent years, international support for an issue as well as the behaviour of the country in question are factors that influence how India votes. The humanitarian crisis in the Gaza strip was the pivot of the Geneva session and speaker after speaker detailed the shelling of innocent people.

India has backed country specific resolutions where there has been a consensus for example on North Korea, Libya and Syria. The EU has also voted against Israel at the UNHRC and while it abstained on Wednesday, EU countries took time to stress what they said was Israel’s “disproportionate” response in the Gaza strip.

So why did India cast the decisive abstention vote on the Sri Lankan resolution? That’s because New Delhi believes that resolution was an intrusive one with a distinct investigative track that questioned the territorial integrity of the country.

On a first reading of most of the resolutions since the creation of the UNHRC, The News Minute did not find any resolution on a developed country. There were several on former Yugoslavia, but they were prior to 2006. There were none calling for an inquiry into Guantanamo Bay. We could be wrong.