The BJP's electoral juggernaut could run aground if it fails on the issues it capitalised on in its UP campaign.
The most important challenge lies in whether it can meet the aspirations of the youth who were drawn by the promise of gainful work, says Nitin Desai. 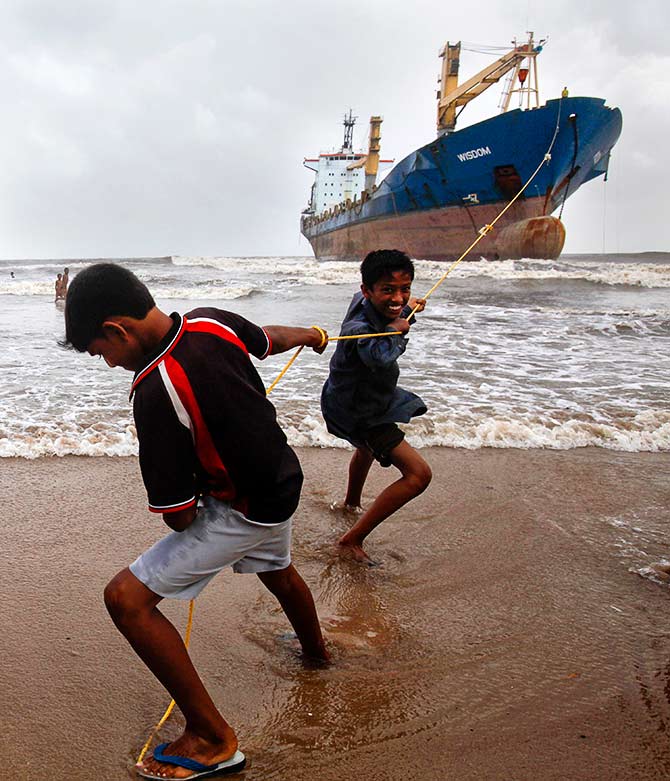 IMAGE: Growth may accelerate, but job growth at the rate required is not in sight. These frustrated expectations can recoil on the BJP. Photograph: Vivek Prakash/Reuters

The narratives that politicians fashion to project their vision of the past, present and future have a profound influence on the trajectory of development.

Such narratives become politically successful when they resonate with people, particularly the young who have the future ahead of them.

Jawaharlal Nehru's narrative of parliamentary democracy, secularism, non-alignment, planned development, modern industry and science & technology resonated with my generation, which wanted to be as good or better than their former colonial overlords.

Indira Gandhi's narrative of Garibi Hatao in 1971 echoed the aspirations of the 300 million Indians who, then, had the vote but, despite that, languished in persistent poverty.

Manmohan Singh's narrative of liberalisation in 1991 reflected the hopes of the young technocracy, which wanted the freedom from controls that their global comparators enjoyed.

Today, the political narrative must respond to the aspirations of the youth, who seek gainful work in the modern economy.

The recent election result in Uttar Pradesh, where the Bharatiya Janata Party won decisively, raises the prospect of a new political narrative.

Whose hopes and aspirations will this narrative reflect?

There are some who see the outcome as proof of politics transcending caste and community vote banks. But a closer analysis suggests that it is the result of a clever management of caste equations and communal sentiments.

The chief ministerial choice made by the BJP clearly supports this interpretation.

If anything, it suggests that, despite the metronomic references to development, the emerging political narrative, in the Hindi belt at least, will draw more on atavistic loyalties than on modernising aspirations.

Will this carry over to the national scale?

The overwhelming nature of the BJP victory in UP suggests to some that they have a winning formula that will give them equally decisive mandates in the forthcoming 2017 and 2018 elections in Gujarat, Himachal Pradesh, and Karnataka.

People are talking about the return of one-party dominance as in the early years of Independence when the Congress party had virtually complete control over the central and state governments under the tutelage of an unchallengeable leader.

But the analogy is quite misleading.

The ideological moorings and the potential for authoritarianism if the BJP annihilates the Opposition in the forthcoming elections are the opposite of what we had in the Nehru era when communal and social peace and civility of political discourse were a part of political culture.

If the BJP juggernaut continues on its path of flattening the Opposition, what prospect does this hold for development?

Some commentators and foreign investors see the result as holding the promise of strong government, accelerated policy reforms and improved growth prospects.

But some also express the fear that the ruling party will interpret the result as the outcome of populist policies and will go on a welfare spending spree to consolidate its electoral base.

Politics is theatre and demonetisation was a dramatic gesture that hit the rich and that is what mattered more to common people than the fine analyses of its inconveniences and its impact on the poor.

Will this acquired anti-rich image constrain the government from doing things like privatisation or deregulation that may be seen as helping the rich? 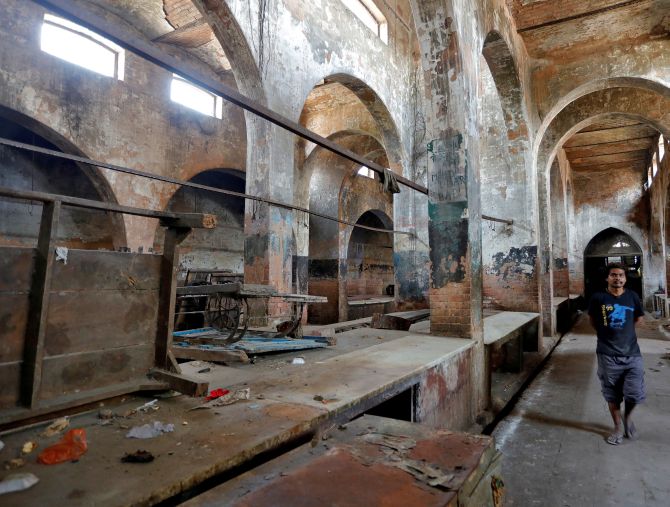 IMAGE: Inside an abandoned meat market in UP.
A potent barrier to dominance could come from worsening communal tensions and cultural aggression by extremist supporters of the BJP, who have been emboldened by the appointment of one of them to the most important chief ministership in the country. Photograph: Reuters

Electorally, the BJP juggernaut could run aground if the ruling party fails on the issues, which it capitalised on in its recent campaign.

The electoral arithmetic that worked in its favour in UP may not work elsewhere.

UP is special in the number of significant independent parties who compete for votes. Some calculations suggest that had the votes cast for Samajwadi Party-Congress and Bahujan Samaj Party been consolidated, the BJP would have won only 90 to 100 seats.

In states where polls are due in 2018, there is a virtual two-party structure with a direct fight between the BJP and the Congress and the anti-BJP vote will not be split in the same way.

A failure to show clear results on black money and corruption can alienate voters.

Making policy scams the focus of public debate in the final years of the United Progressive Alliance government and the drastic demonetisation measure suggested to voters that the BJP's commitment on these issues went far beyond that of other parties.

However, the impact of demonetisation on the black economy is still uncertain and day-to-day corruption has not come down.

A recent survey, conducted by Transparency International in 2015-16, found that 69 per cent of respondents in India said they had paid a bribe or given a gift or favour to a police or court official, or to secure services from a public school, public health centre, or to obtain some official document or utility service.

This continued experience of day-to-day corruption will erode the BJP's occupation of the probity space.

The most important challenge lies in whether they can meet the aspirations of young persons entering the workforce who were attracted by the promise conveyed by the programmes for financial inclusion, skill acquisition and entrepreneurship.

These aspirations are a potent political force in the northern states, where the bulk of the increase in the young labour force, the so-called demographic dividend, takes place.

Growth may accelerate, but job growth at the rate required is not in sight. These frustrated expectations can recoil on the ruling party.

A potent barrier to dominance could come from worsening communal tensions and cultural aggression by extremist supporters of the party, emboldened by the appointment of one of them to the most important chief ministership in the country.

The many instances of mob and vigilante violence that we have seen may go up sharply and the ruling party will face a backlash, even from sympathisers.

The divisive political rhetoric that is emerging will undermine the developmental aspirations that are also part of the narrative and the real reason for the voters support to the ruling dispensation.

For true modernisation, the political narrative must move beyond ancient loyalties of caste and religion to one where politics is based on class interests.

Right now, that prospect has moved into the distance.