In Goa, says Kishore Singh, you are defined as much by the village that makes up your address as by the neighbours who keep you company. 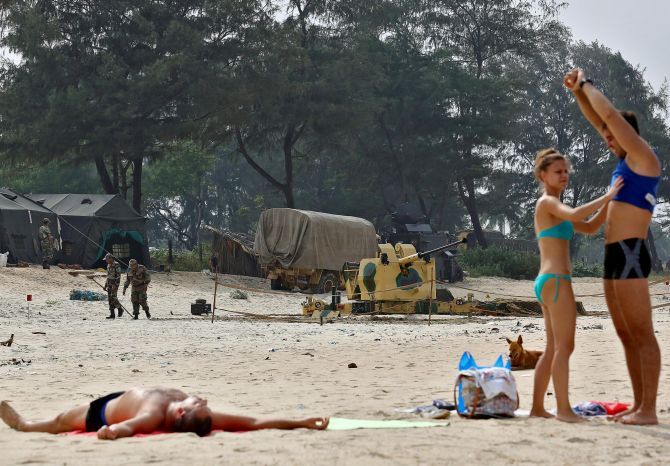 Last evening I met Charu, Lata, Charulata, Hemen, Ajay, Soni, Apu, Vijay, Digvijay, Ranvijay, all in the space of one party and in just a couple of minutes.

"You're going to Goa," said my wife, "I know you'll be alone, but never mind, you'll get some peace."

"I met Sanju, Raju, Hema, Anita, Gita, Sita, Vinita and their gangs," I told her later at night, because everyone from Delhi meets everyone else from Delhi when in Goa.

And they were doing what every true-blue Dilliwallah does regardless of where they are, soaking up whisky by the gallon loads before downing respectable sizes of food without knowing what it tasted like.

Goa could be Greater Kailash and no one would know any better.

Working in Goa is an oxymoron, but I was in Goa on work, and determined to stay away from Charu, Lata and the whole Delhi jing-bang lot, only it's easier said than done.

You couldn't turn a corner without running into Sanju and Raju living it up in the shacks, or Anita and Sunita shopping for Wendell Rodricks' linen shirts in every colour.

Downing beer, clearing the oceans of their vast produce of prawns, polishing off the rechado masala with the last piece of bread, the Dilliwallahs have taken over Goa and turned it into another suburb, not entirely unlike Gurgaon.

I rang a friend so she could join me for lunch, but she complained she had work to finish. ?What work?" I asked. "I have an email to write," she said. Anything else? "What do you mean what else, writing an email is a lot of work," she griped, indicating that five minutes is what Dilliwallahs are willing to give to their professional lives when they escape to Goa.

And escaping they are, in droves.

More friends of ours have homes in Goa than in Delhi, where they prefer to rent them.

In Goa, you are defined as much by the village that makes up your address as by the neighbours who keep you company -- and it hardly matters whether those neighbours are in Goa or in Delhi, for in this melting pot you can never really escape far enough away.

So, you end up schmoozing with all the people you didn't want to meet anyway and is the reason why you fled to Goa, only to be reunited with the people you were running away from.

This morning, I heard a group of women complaining about the weather. “"It was so hot at 10.30 in the morning," said the first.

They were all Delhi escapees, who had probably never stepped out of airconditioned rooms in their city homes, but were venturing out for a 'feel' of the real Goa and finding they didn't like it as much as they expected to.

In any case, they found their way back to their resort and spent the rest of their stay in their airconditioned rooms watching TV and gossiping about the wedding they had been invited to, but which was going to be such a bore because it was in the muggy outdoors.

The Dilliwallahs come and go from Goa, measuring out their 'enjoyment' factor in decibels of music and how much Kingfisher they can have.

Which is why I'm glad to be returning to Delhi, where Charulata and her cohort of noisy friends will be absent from the social scene for the while they are away in Goa.

IMAGE: One thing you won't run into in Goa is this anti-aircraft gun, which was a familiar sight on Goa's beaches during the BRICS Summit in September. Photograph: Danish Siddiqui/Reuters