'Insulting the law, instigating violence, living ostentatiously and preaching godliness?'
'This vulgar hypocrisy needs peoples' rejection and a revolt.'
'If people can't speak out, then it will be a hypocrisy that they expect the government to act and speak for them,' says Tarun Vijay. 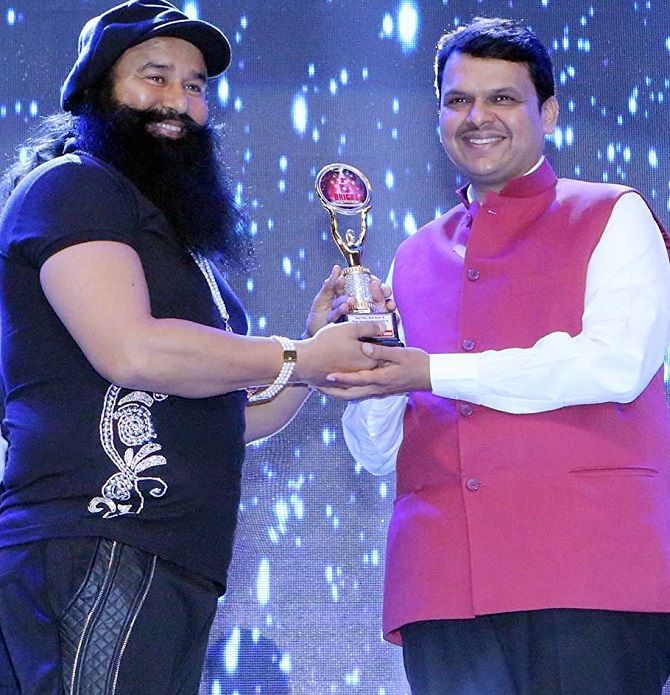 Dharma is synonymous with calmness and an unquestionable austerity.

Baba Ram Rahim will serve his clan and society well by ensuring that his followers behave like the followers of a spiritual person.

The cost Haryana and Punjab are paying for his actions is more than what is being calculated in terms of physical losses.

It's the trust in spiritual personalities that has gone abysmally low seeing examples of people like him.

Don't blame the government for that.

If people can't speak out, then it will be a hypocrisy that they expect the government to act and speak for them.

It's true that Baba has been projecting himself as a messiah to the Dalits and other marginalised sections of the society. His words were the ultimate instruction for them.

In media and in politics, everyone enjoyed his 'heroic' action-packed movies, his political 'bakhsheesh' in form of vote transfer during elections, and his maverick ways of conducting social campaigns, including cleaning the Ganga.

What we are witnessing in Haryana and Punjab must make us speak out against what our conscience says is wrong. Keeping silence in the name of any culture or religion will be a sin against our faith and the Constitution.

Hindu saints are known always, without exception, for their austere lives and simple, scholarly demeanour.

From Swami Dayanand, founder of the Arya Samaj, to Sri Aurobindo, Ramakrishna Paramhams, Sant Gadge Maharaj, Ramana Maharishi and Sri Narayana Guru, we see a divine aura around them, a heartwarming simplicity and an inspiring selflessness.

They wanted nothing, but gave away whatever they had to attain self realisation and lead a life to serve everyone without discrimination.

That spirit of selflessness and a radiant spiritualism has sustained Hindus since ages.

For such sages, kings and emperors were nobodies; the only criteria to become dearer to them was simplicity and a selfless devotion to the divinity.

Of late, we have been seeing an ugly ostentatiousness guiding the spiritual domain.

To add salt to the injury, political leaders make a royal entry to the centres of these persons who lead an extravagant life, selling India's most precious gift to mankind -- spiritualism.

We are honestly not interested in saving the basic tenets of Hindu dharma.

We hardly do anything to save Hindus from the assaults of proselytisation and jihad of various forms.

We are reluctant to contribute in the efforts to consolidate Hindu society against foreign funded schemes to disintegrate them and to damage their precarious social fabric.

From Kashmir to Kerala, Hindus are under assault.

In Bengal, the land of Hindu nationalism and spiritual awakening, Hindus find themselves at the receiving end and their festivals are mortgaged to the vote bank politics of Muslim appeasement.

There is hardly any outrage against these trends.

Extremist adherents of the Communist ideology in Chattisgarh and Kerala target only Hindu workers in the name of a sham ideological war.

None speaks for the Hindu victims. It is still a matter of hesitation if Hindus are victims of assaults.

Gone are the days when Hindu reformists would speak out in favour of those whom Dr Ambedkar called the 'depressed classes'.

No one visits the victims whenever there is an atrocity on a scheduled caste family in any part of the nation (of course, till they threaten to convert), but we get agitated when something that has nothing to do with the dharmic tradition appears on the horizon with burnt vehicles, splattered blood of innocent citizens on the roads weaving a reign of fear all over.

Can that be equated with dharma?

Can we say violence against a court order should be 'understood' in terms of the influence the accused has on his devotees?

Decide and speak out your mind.

Dharma means dharma, and silence on adharma is as sinful as adharma itself.