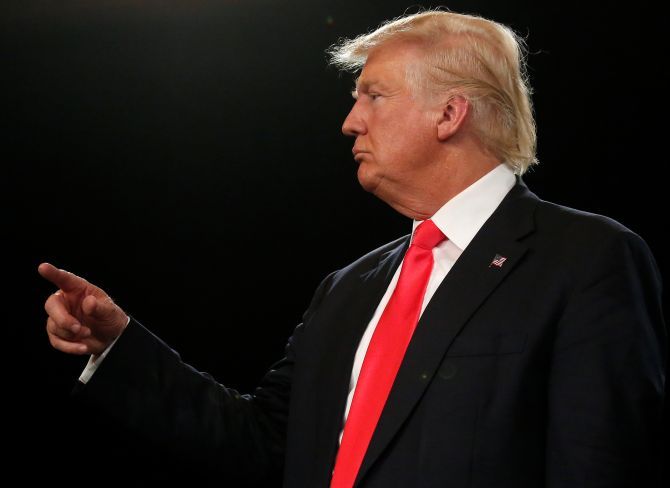 'India and Indian Americans cannot rely on wishful thinking about the checks and balances in the US system to magically take care of the many dangerous things that Trump could do,' says Chicago-based writer Ram Kelkar.

The very real possibility of a Trump presidency is finally beginning to dawn on America and the rest of the world following Donald Trump's anointment as the Republican Party nominee.

Indians and Indian Americans are beginning to pay serious attention to a candidate who no one had believed had a realistic chance of winning the nomination, let alone becoming the leader of the free world.

More than a quarter century ago, Francis Fukuyama had famously announced the 'end of history' and the triumph of liberal free-market capitalist democracy over every other non-democratic closed market political philosophy and belief system.

Globalisation of business and the rise of a global citizenry conducting business and moving freely between nations across the globe had become widely accepted as inevitable and permanent facts of life.

In this environment, Indian software firms and Chinese manufacturers dramatically changed the business landscape in the US, resulting in large scale layoffs for white collar and factory workers, beginning in the late 1980s and 1990s.

Meanwhile, immigrants flooded into the US in unprecedented numbers, including many from India whose work ethic and valuable contributions to the US economy made them feel immune to any resentment from those displaced in the global economy.

With US unemployment rate finally edging down to below 5 per cent and US corporations dominating the global economy with customers and workers in countries across the world, the general perception in recent times was that the worst of the economic transition was over and the US had its groove back.

Not so fast. It took several decades, but the slow burning fuse of resentment amongst the older non-college educated non-minority US citizenry, which had not benefited much from globalisation, and which viewed the success of immigrants and minorities with jealousy and suspicion, has finally burst forth.

Anger and angst about income inequality and a widely held belief that the system is rigged in favor of the one-percenters is mutating into hatred for 'others' such as minorities and immigrants. The common refrain in the US of wanting to 'take our country back' is largely a result of racial and cultural resentment as the country has become less white and more progressive in recent decades.

This development poses a real threat to the safety and well-being of Indian-American and immigrant communities in general, since it is bringing latent white supremacist groups out of the woodwork, and hateful speech about 'brown skinned' people is becoming much more commonplace than ever before.

Donald Trump has successfully channeled this bottled up angst and resentment into a movement based on anger and hatred and this has brought him one step away from the White House.

At the Republican convention in Cleveland, he painted a dire picture of a dystopian world full of 'poverty and violence at home, war and destruction abroad.'

What is worrisome for Indian Americans is a vision of America in which immigrants are viewed as the primary source of 'violence in our streets and the chaos in our communities.'

In December 2015, Trump called for 'a total and complete shutdown of Muslims entering the United States... our country cannot be the victims of horrendous attacks by people that believe only in jihad, and have no sense of reason or respect for human life.' Without any evidence and based on what he thinks he read or saw somewhere, Trump claimed that thousands of Muslims were cheering in New Jersey after the 9/11 terrorist attacks.

Shalabh Kumar, a major Indian-American donor to the Trump Victory Fund, was quoted in the India West newspaper as saying that he supports Trump's initiative of greater scrutiny of Muslims, 'including those already in the country and Muslims attempting to enter the US.'

Such actions, besides being unconstitutional, are against the core founding principles of the United States and likely to put all Indian Americans of any faith in danger of facing 'greater scrutiny.'

Broad brush condemnation of an entire community, instead of focusing on those few who adhere to extremist ideologies, could be very dangerous for all minorities.

Prejudice against Muslims or Muslim-looking people could turn into suspicion about all brown-skinned people and anyone looking 'different' and some of that is already happening.

There are many reports of Trump supporters at rallies shouting racist epithets and lunging out at anyone who they assumed was a Muslim or a Mexican protester.

One of the most ironic examples of prejudice based on skin colour and appearance was the example of Guido Menzio, an Ivy League economist of Italian heritage, who was taken off an airplane because someone thought he 'looked suspicious' and the math equations he was writing seemed to be in Arabic. Menzio has been described as having dark, curly hair, olive skin and an exotic foreign accent.

With regard to foreign policy and ties with India, some Indian media reports are drawing broad brush conclusions about Donald Trump that he will somehow be more pro-India than Hillary Clinton. One of the quotes attributed to Trump last year is that he called Pakistan 'probably the most dangerous country in the world today,' adding that the only country that can 'check' Pakistan is India.

Kumar, the Indian-American Trump mega-donor, has spoken about 'Trump's support for cutting off all aid to Pakistan, with the aim of deterring terrorism fomenting in the country' and added that 'he recognises Pakistan for what it is -- a nation of thugs.'

This directly contradicts what Trump said in response to a question on Fox News' On the Record show in April that he would 'try and keep' the 'not that much' amount of foreign aid the United States gives to Pakistan.

'And we have,' Trump added, 'and that's very much against my grain to say that, but, a country -- and that's always the country I think, if we give them money, we help them out, but if we don't, I think that would go on the other side of the ledger that could really be a disaster.'

Notwithstanding the fact that the above collection of words spoken by Trump makes little grammatical or idiomatic sense, it is evident that he has limited knowledge about foreign policy and no intention of making any changes to the current relationship with Pakistan.

It also seems very unlikely that he will change US policy in any meaningful way to fight against terrorism in South Asia, especially since his focus on 'America first' means that he would expect India and even NATO partners to solve their own security challenges without expecting help from the US.

In the meanwhile, Hillary Clinton as secretary of state in the Obama administration continued the policy of the Bush administration of building ever closer ties with India as the world's largest democracy and a counter-balance to China.

US-India ties will continue to grow stronger regardless of which candidate is elected, since there is a bipartisan consensus about the strategic importance of this partnership.

With regard to trade policy, Trump's campaign has focused intensely on correcting trade imbalances, and this could be a major challenge for India which is among the top 10 US trade partners and enjoys a significant trade surplus of over $23 billion as of 2015.

While China and Japan are likely to bear the brunt of any protectionist drive in a Trump administration, India is not likely to escape unscathed.

On the issue of H-1 visas, which are important to Indian software companies, Trump has flip-flopped multiple times and his policy is not entirely clear at this point.

He had initially proposed restricting the H-1 program, and has criticised it for giving away IT jobs to workers flying in from overseas locations.

He did seem to moderate that position later, stating that Silicon Valley needs highly skilled workers and that there is a need to 'keep the brain power in this country.'

Last but not least, besides the thorny issues surrounding race relations, foreign policy and trade, one of the most worrisome issues about a Trump administration is the unknowable impact of the highly unpredictable nature of his style of functioning which could roil the global economy and geo-political relations.

Abrupt actions such as withdrawing from trade pacts like NAFTA and imposing trade tariffs on China could result in turmoil and sharp declines in markets. Refusing to uphold obligations to support NATO partners including vulnerable ones such as the Baltic nations could embolden Russia and worsen the crisis in Ukraine and the Middle East.

The risks are manifold and India and Indian Americans cannot rely on wishful thinking about the checks and balances in the US system of governance to magically take care of the many dangerous things that Trump could do, and hope for the best that change is good for the sake of change alone.

Of all the many reasons to be concerned about Donald Trump's rise, a victory for him would be a fillip to right-wing zealots and racists across the globe, and will reinforce a global trend toward a toxic blend of authoritarianism and xenophobia.

The sight of Hindu Sena activists performing a Donald Trump puja complete with a vermillion tilak on his photo which was fed a slice of cake as prasadam was amusing and at the same time not very funny.

They called him a 'raja' of the United States who was going to solve all their problems by fighting Islamic terrorism.

Rational thinking Indians and Indian Americans can only hope that the coronation never happens!