News
Business
Movies
Sports
Cricket
Get Ahead
Money Tips
Shopping
Sign in  |  Create a Rediffmail account
Rediff.com  » News » Does Swamy think of himself as Kautilya reborn?

Trying to guess Subramanian Swamy's motives or next step has been a rather difficult exercise for decades, says Archis Mohan 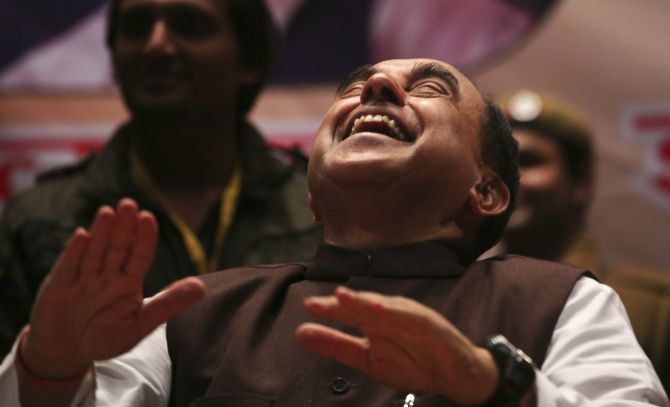 "I am inspired by Chanakya, who upon being insulted by Nanda king resolved…" tweeted Subramanian Swamy on April 4, 2013.

This one was in the context of his pursuing legal cases related to scams during the erstwhile United Progressive Alliance government's rule and those related to Congress president Sonia Gandhi and her kin.

Swami, unlike Chanakya, has presumably been insulted by many, which had over the years made him put heart and sinew into insulting them in return.

And, if Chanakya brought down the mighty Nanda dynasty of Magadha some 2,400 years earlier, the 76-year-old Rajya Sabha member has proven an indomitable foe for politicians such as Atal Behari Vajpayee, J Jayalalithaa and some belonging to the Gandhi family.

Swamy has been called a maverick, diabolical and even an agent of foreign powers but he thinks of himself as a nationalist and takes pride in giving back as good as he believes to have received.

Chanakya crops up often in Swamy's speeches and public utterances, and seems to be somewhat a role model for the Rajya Sabha member. Chanakya, or Vishnugupt, was a poor Brahmin who had vowed to bring down the Nanda dynasty after being insulted in the court of King Dhanananda. He is then believed to have groomed Chandragupta Maurya to depose Dhanananda.

Chanakya's protégé, the legend goes, also fulfilled his mentor's ambition of driving out the foreigner Greeks and defeating their vassal kings.

Incidentally, Chanakya, also known as Kautilya for his devious mind, authored a treatise on statecraft, Arthashastra, remembered for its advocacy of employing all means possible to bring down a foe.

Swamy has his own list of people, bureaucrats and politicians, whom he believes are serving foreign interests. He has justified his recent attacks on Reserve Bank of India Governor Raghuram Rajan and Chief Economic Advisor Arvind Subramanian for their links to America; he says he has a list of 27 such men and women.

Incidentally, Swamy himself studied and had later taught at Harvard. His politics, on the face of it, has been chequered. Swamy made it to the Rajya Sabha in 1974 on a Jana Sangh ticket, did a stellar job in fighting the Emergency and was a Janata Party Lok Sabha member twice, in 1977 and then re-elected in 1980.

He was close to the Rashtriya Swayamsevak Sangh leadership, particularly Nanaji Deshmukh, and the Sangh viewed him as a putative rival to Vajpayee.

In his autobiography, serialised in a Tamil publication in 1997, Swamy heaped venom on Vajpayee. Swamy accused Vajpayee of ensuring he didn't get a berth in the Morarji Desai council of ministers and alleged Vajpayee brought down the Desai government. He also recounted colourful stories about the former PM's personal life.

Vajpayee and Lal Krishna Advani, however, diluted the RSS influence after they broke away from the Janata Party to float the Bharatiya Janata Party. Those with closer links to the RSS found themselves marginalised and Swamy stuck to the Chandra Shekhar-headed Janata Party.

After 1984, much of the opposition and particularly the BJP was demoralised by their decimation in the Lok Sabha elections. The BJP won a mere two seats. Elements in the RSS, including Deshmukh, were sympathetic to the Rajiv Gandhi government. Swamy was soon a part of Rajiv's inner circle.

He was also close to the then Tamil Nadu chief minister M G Ramachandran (MGR). Swamy was a minister in the short-lived Shekhar government in 1991, supported from outside by the Rajiv-led Congress. Rajiv was assassinated during election campaigning in May 1991. The subsequent Narasimha Rao government accorded Swamy a ministerial rank.

His antipathy to Vajpayee erupted again in 1999. In 1998, MGR protege Jayalalithaa had made her All India Anna Dravida Munetra Kazhagam ensure Swamy won a Lok Sabha seat from Madurai.

Vajpayee returned as PM in the 1999 elections and Swamy again found himself irrelevant. In 2000, Swamy wrote a stinging write-up against the "creeping fascism of the RSS".

Swamy's distancing from the RSS and his known proximity to the Gandhis should have helped find a place in the UPA government, although it was supported from the outside by his sworn enemies, the Communist parties.

A few years later, Swamy, in his new avatar as a lawyer, pursued the telecom scam and the National Herald case. He also pursued the disproportionate assets case against Jayalalithaa that eventually led to her quitting as the Tamil Nadu CM and spend 22 days in prison.

He also took to calling Sonia and her son Rahul names on Twitter and started advocating the cause of the RamTemple in Ayodhya. With Vajpayee ailing and Advani sidelined, the RSS influence on the BJP became stronger. Swamy not only joined the BJP but was nominated to the Rajya Sabha earlier this year, despite reservations of Finance Minister Arun Jaitley.

There has been much speculation on whether Swamy's support comes from the RSS or the PM or is he a lone ranger? In the past, Swamy has taken on Vajpayee, Jayalalithaa and Sonia, among others. The ones who could keep him on their side were Rajiv Gandhi, Chandra Shekhar and Narasimha Rao. All three assuaged Swamy by lending a keen ear to his advice and give important positions in their durbars.

It will be interesting to see whether Prime Minister Narendra Modi will be willing to pay that price for supporting Swamy. Once, during a Rajya Sabha discussion on the AgustaWestland bribery case, Congress leader Anand Sharma cautioned the BJP that Swamy was a loose cannon and they'd soon find the cannon's mouth turned towards them.

BJP sources say that nominating Swamy to the Rajya Sabha was the least the party could have done in return for his 'services' to their cause. But if Swamy thinks of himself as Kautilya reborn, Prime Minister Modi definitely isn't his Chandragupta.

"Modi will never relent on his principle of not accommodating those above 75 in his council of ministers. Swamy is nearly 77, but with ambitions to be part of the cabinet, which will be never met in this government," a BJP source said.

An increasingly ill-tempered Swamy, or so party leaders believe, will provoke the party leadership into sacking him, something the BJP is wary of but willing to tolerate. "Swamy inside the party will be manageable but outside he will be a big nuisance," a BJP source said.

It remains to be seen if the ultimate maverick of Indian politics tries to build alliances to achieve his objectives, than rocking the boat when his ambitions are not met. 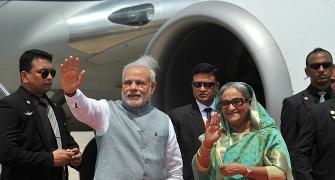 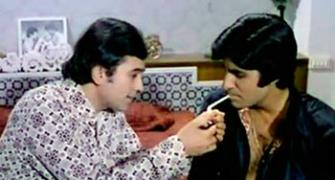 Quiz: Which classic is Namak Haraam inspired from? 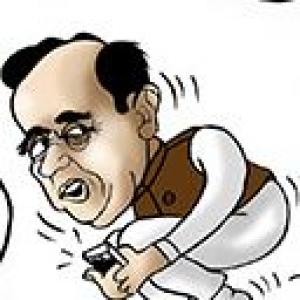 Uttam's Take: Swamy and his Games 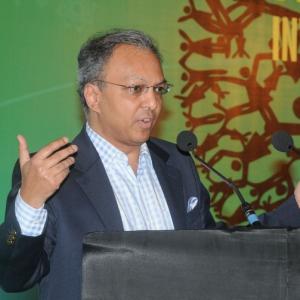