Fencing the border between Myanmar and Nagaland is expected to adversely affect the Naga tribals whose lives straddle both sides of the border.
Gautam Sen, an expert on Nagaland, explains why the Indian government needs a more comprehensive and long-term perspective on this issue and why it must take local tribal sensitivities and customs into account. 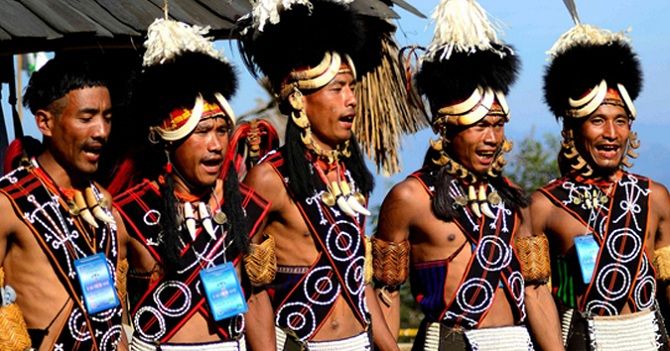 IMAGE: The fencing of the India-Myanmar border in Tuensang district of Nagaland has led to resentment among the Khiamniungan people, many of whose land and personal immovable assets spread across the border.
Photograph: Kind courtesy Tuensang.nic.in

India's frontier with Myanmar stretches over nearly 1,643 km, of which 215 km involve Nagaland.

At short notice, the Myanmar government of Aung San Suu Kyi's National League for Democracy recently intimated to the Government of India that it desires to fence this Nagaland portion of the border on their side.

The Indian authorities were apparently surprised at Myanmar's decision. New Delhi, however, consented to Naypyidaw's request.

In early December, the Myanmar authorities started preliminary reconnaissance survey adjacent to the Noklak sub-division of Tuensang district, before eventually erecting a fence beyond the stipulated 500 metre line on their side of the India-Myanmar border.

As a result, in this area of Tuensang district of eastern Nagaland, resentment has built up among the eastern Nagaland tribesman, the Khiamniungan people, many of whose land and personal immovable assets straddle both sides of the border.

There are many Khiamniungan families whose members have been residing on both sides of this portion of the border for ages.

As a consequence of the decision to fence the border, the daily life and livelihood activities of the Naga Khianmiugan people are expected to be adversely affected.

The matter has been raised consequently at the administrative level by the chief secretary of the Nagaland Ggovernment with the Union home secretary and also politically by the former chief minister and lone Lok Sabha member of Parliament from the state with the prime minister on January 16.

There are security implications of a 'soft border' or an 'open border regime' (a border control system that permits movement without passport and visa clearance) with Myanmar.

Given that the Nationalist Socialist Council of Nagalim (Khaplang group) (NSCN-K), which opted out of the ceasefire with the GoI in March 2015, have camps in Myanmar and had subsequently launched hostile armed action against the Indian Army and other security forces deployed in the India-Myanmar border regions, an 'open border regime' may be deemed to apparently work against India's security interests.

Notwithstanding this backdrop, the border, and particularly the Indian contiguous zone, cannot be secure, if peace and tranquility does not prevail there.

Peace and tranquillity can be possible in a milieu in which the local people are happy and able to perform their normal socio-economic activities as per their customs, needs and choice.

Viewed from these perspectives, there is a need to strike a balance between the two factors -- security requirement against hostile anti-India elements, which operate from their camps and hideouts across the border, and maintaining an environment harmonious to the customs and pattern of life of the tribal persons who have been inhabiting the border region spread over the cartographic boundary. IMAGE: A Naga man hunts in the Naga Self-Administered Zone in the Sagaing division of Myanmar.
These people of Naga stock have enjoyed a large degree of autonomy from Myanmar, a fact that anti-India elements like the NSCN(K) have exploited.
Photograph: Soe Zeya Tun/Reuters.

It appears that, there is need for a more integrated and harmonious approach on such border management issues.

The state government, in this case, does not seem to have been in the loop of New Delhi's decision-making process with regard to conveying a 'no objection' to Naypyidaw on the Myanmar government's border fencing proposal.

Though cognisant of the security backdrop, the GoI obviously had not anticipated the timing of the Myanmar government's move, and also failed to visualize the local political repercussions on the border fence issue.

There were repeated references to New Delhi from the Assam Rifles' authorities covering the India-Myanmar border, on the likely security-related implications of the 'free border regime' and the advantage being taken of the existing arrangements by anti-India elements who moved in and out of Myanmar and mingled with the local people.

An effective India-Myanmar joint management of the prevalent 'free border regime' seems to be lacking in the Nagaland segment --n between boundary pillars number 145 and 146 of the India-Myanmar boundary.

The GOI should have taken the state government into confidence, and instituted a suitable oversight mechanism in this border region in concert with the Myanmar authorities, before conveying clearance to Naypyidaw for reconnaissance and erection of the proposed boundary fencing.

However, it is understood from authoritative sources, that the boundary fencing survey and other associated activities, have been temporarily halted by the Myanmar government authorities at the end of December 2016.

The matter has also been deliberated upon during Myanmar's mational security adviser's visit to India earlier this month.

The Government of India has a respite because the border fencing activity has been suspended for some time.

The India-Myanmar border is well delineated.

There are no major contentious issues in this respect. However, the writ of the governments, particularly on the Myanmar side in its Sagaing administrative division, has not extended substantively to these areas.

A void has consequently arisen over the years, in the exercising of control over movement of persons and material across the border.

The issue seems to have got accentuated owing to deterioration in the situation in Myanmar's Rakhine state of this western administrative division, and some fringe elements of the ethnically persecuted Rohingyas attempting to resort to armed action against Myanmar State interests.

The NSCN(K) has also exploited this void, to disturb peace and security on the Indian side.

The GoI will have to strike a balance between its overall security interests and need for strategic control in this region, with maintenance of tribal harmony and retaining the affiliation of the Naga people of the border areas.

There has already been strong resentment on what is being viewed as obstruction by the government authorities on the Indian side, on observance of tribal customs, way of life and fulfilment of economic needs of the people who are ethnically similar and spread across the international boundary line.

This has led to a situation where a de facto border as a defined interrupting obstacle does not exist in the psyche of the local residents.

Complementarities in economic needs of the ethnic communities across the border, is also a determining factor towards this free movement.

Attempts to impose a physical obstacle in the form of a fence is, therefore, creating tension for the affected tribal people of Nagaland as well as our civil administrators and those concerned with border management like the Assam Rifles and other central police forces and the Indian Army, which remain responsible for ultimate strategic control of the international border. 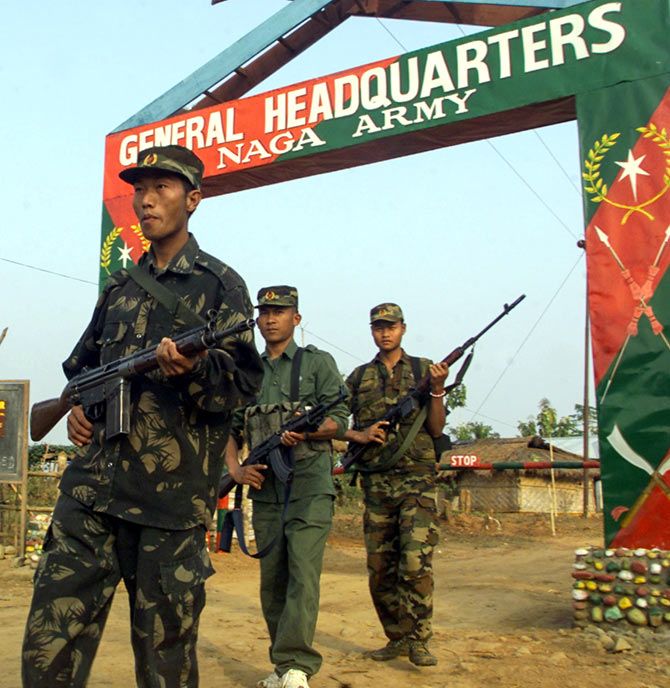 IMAGE: NSCN rebels at their headquarters in Hebron, Nagaland in 2004.
Photograph: Utpal Baruah/Reuters

Myanmar has been having its problem of integrating its ethnic sub-national groups over a considerable period of time.

There has been some progress in the recent years, particularly since October 2015, towards the central government of Myanmar trying to arrive at a political modus vivendi with its ethnic non-Burman minorities and resorting to a low-key military posture vis-a-vis the ethnic minority armed groups.

In the process, the people of Naga stock in the areas bordering India, in the western Sagaing division of the country, have been enjoying a large degree of de facto autonomy, from Myanmar's central government in management of their own affairs.

Though this has not contributed to measurable economic benefits for the community, the anti-India elements like the NSCN(K) exploited the situation to politically influence some the ethnic groups residing in western Myanmar and eastern Nagaland.

Notwithstanding the cross-border Indian Army operation conducted against the NSCN(K) and its allied elements, the GoI has to do more to ensure that the NSCN(K) and its supportive elements are effectively neutralised and compelled to remain within Myanmar's political adjustment-cum-understanding framework, the ambit of its polity and constitutional processes.

After all, Khaplang is a Myanmar citizen and cannot avoid remaining beyond the pale of that country's administrative control and legal regime.

The civilian Myanmar government led by Htin Kyaw (of Aung San Suu Kyi's NLD) and its military establishment, have also to be persuaded not to leave the NSCN(K) out of their country's political and administrative control.

New Delhi has to be more assertive and effective to obtain a favourable political outcome for India.

Such an outcome will enable a 'free border regime' to prevail on the above referred part of the India-Myanmar border, which may be deemed an inescapable necessity for harmonious Centre-State relations in India apropos Nagaland, as well as political contentment of India's ethnic groups within the architecture of the country's accommodative constitutional framework, legal regime and subordinate laws.

Since 2013, a demand for effective financial devolution and faster development of the eastern Nagaland districts of Tuensang, Mon, Longleng and Kiphire has arisen along with the accompanying ENPO (Eastern Nagaland Peoples' Organisation) movement.

The demand has some merit if socio-economic factors are reckoned vis-a-vis these districts as compared to the relatively advanced districts like Dimapur, Kohima, Mokukchung and Zhuneboto.

Though the ENPO has not become a major political factor in the state, it is undeniable that such political ferment will only induce the backward tribes like the Khiamniungam to seek more trade and intercourse with fellow ethnic groups across the border in Myanmar, and a 'free border regime'.

The GoI should not ignore such economic disparities, which are not an insignificant factor behind the local public outcry for maintaining a status quo in respect of the border regime.

A more comprehensive and long-term perspective of border management, instead of a simply security-oriented view related to circumstances of the immediate past and the present, is required, without being oblivious of local tribal sensitivities and customs.

On both counts, there is much to be done by the GoI and the state government in a spirit of cooperative federalism.

Gautam Sen is a retired Indian Defence Accounts Service officer, who has served in senior positions with the Government of India and was a former adviser to the chief minister of Nagaland. The views expressed are the author's own.