There are instances -- both from national and state elections -- of economic under-performers being returned to power, and also of parties being thrown out despite good performance, observes T N Ninan. 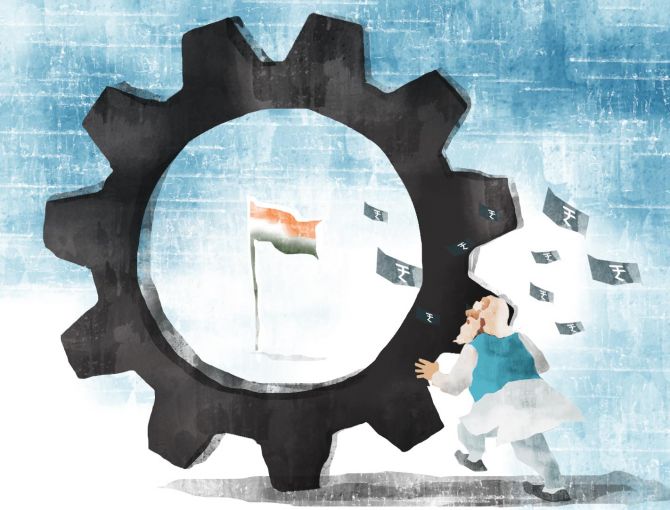 As chief ministers come and go in state after state, the political discourse is remarkable for being mostly divorced from economics.

Take Amarinder Singh, the Punjab chief minister who resigned in a cloud of justified grievance about being humiliated.

But if you were to ask, had Mr Singh earned the right to lead the Congress into the next state elections, due in a few months, you would have to look at his government's performance.

And here's the thing.

In terms of per capita state domestic product, the average resident of Punjab has seen his or her share of state output go up by all of 3.8 per cent over the four years to March 2021.

To be sure, there is the effect of the pandemic on the numbers, and India as a whole has not done much better.

But many states have. West Bengal, where Mamata Banerjee's Trinamool Congress has won re-election, recorded an improvement of 19.1 per cent.

Compare that with Uttar Pradesh, where Yogi Adityanath is taking out multi-page advertisements in newspapers, day after day, exhibiting his government's apparently unprecedented achievements -- prompting the prime minister to call the state Uttam Pradesh.

And yet, the increase in UP's per capita state domestic product during the Yogi's four years in office is all of 0.4 per cent.

Perhaps it's a different picture when it comes to the number of toilets or expressways built.

The irony is that, despite UP's stagnant economic output, the good Yogi is widely expected to be returned to office after state elections next year, just as the Congress was seen as being in a good electoral position in Punjab.

This was despite Amarinder Singh having faced flak for inaction in cases involving desecration of the Sikhs' holy book.

He had also presided over massive power shortages, which shut down industries.

All this was neutralised (before the Congress harakiri) by a bolt of lightning: The BJP and the Akalis split over the reform of agricultural marketing.

So does under-performance matter? It does if you care to look beyond electoral outcomes, and at what is happening in other parts of the country.

Among the five big southern states, Telangana saw its per capita state domestic product grow by a massive 26.2 per cent in four years, while Tamil Nadu recorded 22.2 per cent.

The three other southern states averaged about 15 per cent.

It is not very different in the two big western states of Maharashtra and Gujarat, with three-year growth of 14.1 per cent and 26.7 per cent, respectively.

Both states (also Kerala) have data only till March 2020; their numbers will drop once the figures for Covid-hit 2020-21 become available.

But note that even the poorest eastern states have done well.

It is the heartland that fails to measure up, like Rajasthan with 1.3 per cent per capita output growth over four years.

Other states in the region are scattered around the 10 per cent mark.

But election results and 'wallet economics' seem less synchronous in India than elsewhere.

Tamil Nadu with a superior performance threw out its ruling party, while Kerala with relatively bad performance re-elected the Left Front.

On the other hand, look at nationwide elections.

The subsequent years of rapid poverty reduction got the Congress re-elected in 2009.

Five years later, the onset of a slowdown helped usher in Narendra Modi.

And he remains popular though per capita consumption has been stagnant for four years.

So people don't ask themselves whether they were in fact better off four or five years earlier.

That's how it often works out with charismatic leaders.