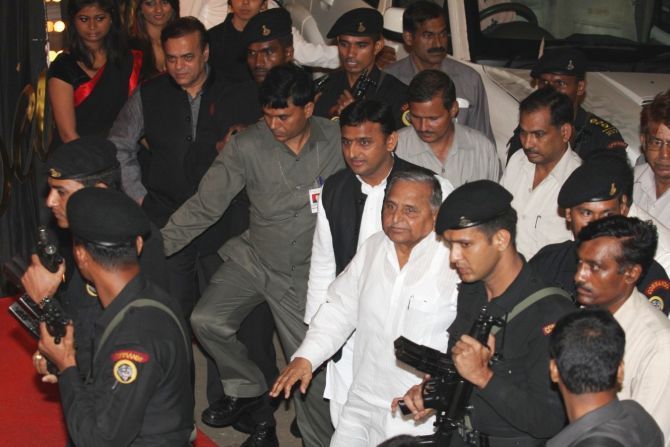 'It is possible Akhilesh has set his sights on 2022.'
'By then, his present day enemies will be more or less a spent force while he will still have a clean image and, at 49, will be regarded as young,' says Amulya Ganguli.

How long will Akhilesh Yadav accept the humiliation meted out to him by his father and uncle? Or does he have a plan up his sleeve?

For a chief minister who said at the beginning of the tussle with his uncle that he took his own decisions, the present meekness can seem contrived or gutless. Which one is it?

For the present, his nose is being rubbed in the dust by Mulayam Singh Yadav and Shivpal Yadav in keeping with the hoary tradition of Indian joint families where the elders have the final say and the younger generation has no option but to abide by their diktats.

Since Akhilesh could not have been unaware of this age-old custom, which is all the more prevalent in the still backward cow belt, it is odd that he decided to take on the elders, especially his uncle, a few weeks ago when he deprived Shivpal Yadav of his ministerial portfolios and sacked those ministers and bureaucrats who were believed to be close to him.

But after Shivpal Yadav sought the intercession of his all-powerful elder brother Mulayam Singh, the wheels of change which the young chief minister had set in motion began turning in the reverse direction.

Shivpal Yadav's portfolios were restored to him by an obsequious Akhilesh and a dismissed minister was reinstated.

But perhaps the most telling blow was the merger of the Samajwadi Party and the Quami Ekta Dal of the don-turned-politician Mukhtar Ansari, a step which was earlier opposed by an image-conscious chief minister.

Now his image is in tatters and the jibes of the ruling party's critics have been confirmed that Uttar Pradesh is run by four-and-a-half chief ministers -- Mulayam Singh, Shivpal Yadav, Ramgopal Yadav and Azam Khan with Akhilesh being the 'half.'

If the Samajwadi Party's new general secretary Amar Singh's name is included in the list, then the state can now be said to be under the aegis of five-and-a-half CMs.

What is clear, however, is that Akhilesh is currently at the lowest point of his career.

He may not even by the chief minister in the (unlikely) event of the Samajwadi Party securing a majority, as his father has indicated.

Many people will wonder why he doesn't resign after all the crippling blows to his self-respect inflicted by the elders unless it is acknowledged that such a show of defiance isn't kosher in a 'happy' joint family.

Akhilesh probably believes that for all his current humiliation, his popularity remains undiminished, especially among the youth and the forward-looking middle class.

In a party with a reputation for harbouring toughies, he is seen as someone who has been trying to repair its image. Hence, his opposition to Mukhtar Ansari, who is UP's counter to Bihar's Mohammed Shahabuddin.

In this respect, as also in the matter of projecting a modern outlook, Akhilesh is different from his father who was once vocally against computers and the teaching of English, reflecting all that is wrong with the Hindi heartland.

Mulayam Singh, Shivpal Yadav and co are perceived, therefore, as typically retrogressive politicians who are not overburdened with scruples about money and muscle power and base their political influence on the crass exploitation of caste loyalties and regressively conservative standards of behaviour.

Akhilesh, in contrast, is more in sync with the emerging world of middle-class aspirations in a market economy where his father and uncle are strangers.

As a result, the latter are probably courting electoral disaster by their curbing of the chief minister's liberalism and adherence to norms in political and personal conduct.

No one can be more aware of the possibility of a negative electoral outcome for the Samajwadi Party than Akhilesh.

It is possible, therefore, that he has decided to let his father and uncle come to the forefront and take the full impact of a setback in next year's assembly elections.

The chances of a drubbing are now all the higher because of Narendra Modi's proactive policy against Pakistan. In 2014, Modi had a sweeping success in UP, winning 73 of the 80 parliamentary seats by promising development.

Now, he can base his success on the surgical strikes against Pakistan. The projected 7.6 per cent economic growth -- the fastest in the world -- will also help Modi.

It is possible, therefore, that Akhilesh has set his sights on 2022.

By then, his present day 'enemies' will be more or less a spent force while he himself will still have a clean image and, at 49, will be regarded as young.

He will also be seen as someone who was done in by his scheming pitaji and chacha, who hadn't a clue that their old-style politics of shoring up local goons for terrorising voters and pandering to primordial caste loyalties was no longer effective.

When the enemy retreats, advance.