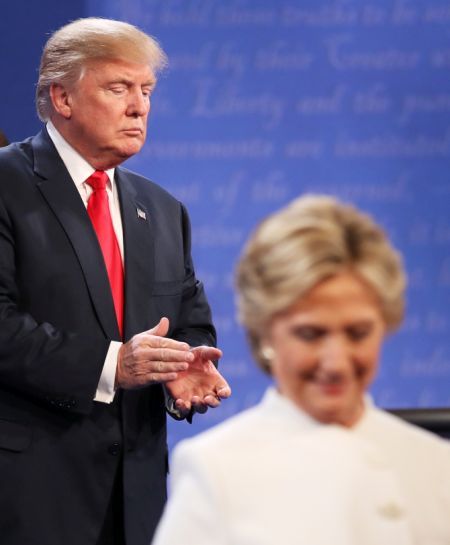 The American electorate are forced to choose between a shop-soiled spokesperson of crony establishmentarianism and an outlandish boor of a showman who should never have been where he is now, says Shreekant Sambrani.

I have keenly watched all United States presidential elections since 1960. Late last May, when it became clear that this year's race would be between Hillary Clinton and Donald Trump, my interest waned, as neither candidate was particularly appealing, Trump being far worse.

That is where it remained until the first debate. Since then, I have observed the scene to the point of addiction. I must confess it is a morbid fixation to watch the increasingly obnoxious campaign, causing deep revulsion, yet being unable to pull oneself away from it.

My vigil of the debates ended on October 20, when the third debate went predictably in favour of Clinton. Trump began more sedately and with greater preparation, but lost it completely when he entered his reservation about accepting an adverse electoral verdict.
He cut off his feet yet again by calling Clinton 'a nasty woman' sotto voce in the dying moments.

Neither candidate convinced any of the committed voters of their opponents, but only one of them needed to do so to win the election three weeks hence.

That candidate was not Clinton.

If a week was a long time in politics for Harold Wilson, the three weeks since the first debate has been an aeon for Trump. Most polls had him breathing down Clinton's neck then. But his ineptitude in debates, which he lost by large margins, compounded by his prevarications on his taxes, execrable attitude towards women, and recourse to conspiracy theories about most American institutions, had him trailing Clinton.

His victory in November, though not impossible, now seems in the realm of statistical improbability.

This campaign has been the most divisive one since the American Civil War. The closest the country came to display such deep fissures was between 1965 and 1975, at the height of the Vietnam War, in the turbulent Johnson-Nixon era.

The assassinations of Robert Kennedy and Martin Luther King rocked the spring and summer of 1968. Race riots spread to major cities. And then came the political tsunami of the Watergate scandal, which had an incumbent president plotting what he himself termed as a 'third-rate robbery' at the Democratic national committee headquarters in Washington, DC.

I was a close witness through my involvement in the anti-war protests and campus politics. Yet the resilience of the American social fabric and resolve of its leadership helped remedy the wrongs. And most unlikely personalities rose to the occasion to do so.

The civil rights and equal opportunity programmes, which changed America for good, are the legacy of the conservative Texan Lyndon B Johnson. The tenacious Watergate Senate investigation was led by another conservative Southerner, Senator Sam Ervin. Legal luminaries Elliot Richardson and Archibald Cox found an unexpected champion in the Republican Chief Justice Warren Burger, a Richard Nixon appointee.

A Republican-controlled House of Representatives forced out first Vice-President Spiro Agnew and then Nixon himself.

I recall these events to reaffirm the faith one had then in the United States as an essentially open, fair and just society. It committed mistakes, but owned most of them and sincerely applied course corrections.

It had bigots in its midst, but they were vastly outnumbered by decent folk, who stood up for what they considered to be right. I still think it is among the greatest countries of the world.

The many scandals -- Watergate, Iran Contra, Subprime, to name a few -- have not shaken that belief, nor the emergence of the Republican Right and the Tea Party fringe.

Until now, that is.

But what really shocked the daylights out of me was the way he has ranted, starting with the rally in West Palm Beach. I expected him not to confess to any wrongdoing, but I was not prepared to listen to what I can only call rabid howling.

I can understand that every society has its dregs, but what I cannot understand is how this especially evil, loathsome specimen became the standard bearer of the party of Abraham Lincoln.

And how he has the rock-solid support of 40 per cent of the electorate.

And how he has bulldozed aside moderate and progressive Republicans and either got their endorsements or bullied them into silence.

Eight years ago, Americans basked in hope and looked forward to the challenge under a new youthful President. Now they are forced to choose between a shop-soiled spokesperson of crony establishmentarianism not exactly a byword for rectitude and an outlandish boor of a showman, who should never have been where he is now.

The times they're a-changin'; will these deeply divided states be ever united again?