Did we miss the DeepState's Brazil Model in action in India in 2004 and 2009, asks Rajeev Srinivasan. IMAGE: Brazil's then President Dilma Rousseff with Prime Minister Narendra Modi before the BRICS summit in Fortaleza, Brazil, July 15, 2014.
Rajeev Srinivasan suggests that Roussef was subjected to forced regime change in Brazil. And so it happened, he says -- Roussef was suspended pending impeachment, and was replaced by Michel Temer. Photograph: Nacho Doce/Reuters

A short while ago I speculated (external link) that BRICS was dead, and that it was not accidental. I further suggested that the #DeepState was behind this, and predicted that it wouldn't be long before Dilma Roussef was subjected to forced regime change in Brazil. And so it happened -- Roussef was suspended pending impeachment, and was replaced by Michel Temer.

Michel Temer proceeded to create a cabinet that consisted entirely of white males (in a heavily multi-ethnic nation). Perhaps more interestingly, WikiLeaks claims in two tweets (here and here) (external links) that he was an informant to the American embassy while being a high official. Thus, there's at least circumstantial evidence that #DeepState could have been involved in the bloodless coup that got rid of Roussef whom it wasn't too happy with.

I felt vindicated in my suggestion that Brazil would be a dry run for the eviction of Narendra Modi from power that #DeepState may be plotting even as we speak ('atrocity literature', 'rights of Scheduled Castes', 'oppression of Christians', 'womens' rights', even antibiotic resistance are all used as weapons against India).

There are enough parallels: Jaswant Singh alleged publicly that there was a high-level American mole in the UPA government -- that sounds just like Temer being an asset in the Brazilian government. In all probability, Jaswant Singh will take his accusation to the grave with him: Presumably he was terrified into not revealing the name (we can speculate, of course).

I have said for a long time that I suspected the 2009 elections were stolen: See my Rediff columns here and here.

In the aftermath of 26/11 and its stunning demonstration of the Congress' incompetence and indifference to national interests, it was astonishing that they won the general election.

At the time, I put forth my thesis that clever EVM fraud had been the main reason. Remote hacking of EVMs via mobile phones was demonstrated (external link) by a team of computer scientists, one of whom got jailed for his pains. 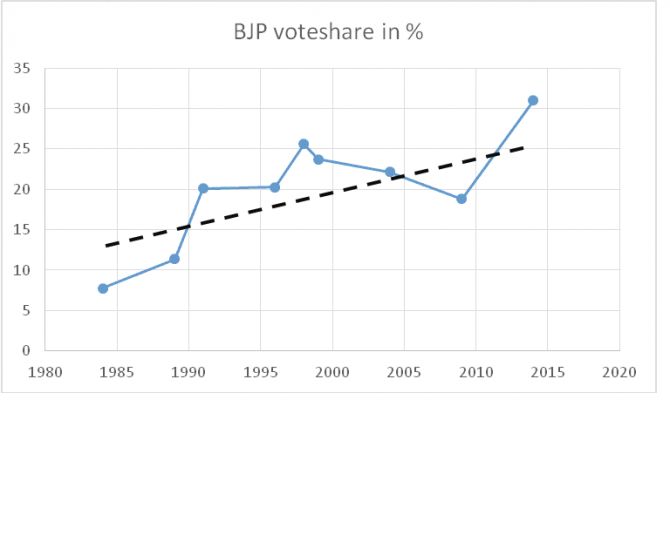 Now there is more circumstantial evidence. Just look at the BJP's vote share in the last few general elections (image, left). The dotted line is the trend line, and based on it 2004 and 2009 certainly look anomalous: A dramatic downturn in the middle of a steady uptick.

What's more, there is the latest poll (external link) by Ananda Bazaar Patrika (no friend of the BJP) and IMRB that suggested that if elections were held today, the NDA coalition would increase its seats from 339 to 342, and its vote share would go from 39% to 46%.

If you assume the BJP would correspondingly go up by 7%, it would rise from 31% to 38%, thus making the trend line go even further north.

If you were to extrapolate from these facts, it appears as though the BJP has been steadily gaining vote share over some years, but for some strange reason, voters didn't like them in 2004 and 2009. That is an odd result.

Why would an electorate that is apparently increasingly happy with the BJP punish them in 2004 and 2009 alone?

By Occam's Razor, the simplest and thus most likely answer is that the electorate didn't defeat the BJP, but malicious foes did.

I have been using the term 'Constitutional coup' to denote what happened in the 'cash for votes' scam, where the Manmohan government survived a confidence vote. But it seems quite likely that 2004 and 2009 were also Constitutional coups that thwarted the will of the people.

EVMs are viewed with suspicion in many parts of the world, and rightfully so. Germans ruled them unconstitutional; California banned them. As someone who worked on US department of defence orange book security, and in Unix internals, I can tell you that most software systems are of dubious integrity, with huge exploitable holes.

I hear there are now some provably correct operating system kernels for which in fact correctness proofs have been generated. But that is a long way from the unvetted, unverified, obscure code in the real-time kernels of the EVMs.

Incidentally, the chief election commissioner in 2009 was a handpicked friend of the Congress and the Nehru dynasty. His confidential report after the 1975 Emergency had said that he should not ever be entrusted with any job of any importance. Intriguing that he was chosen to be CEC. The fact that the Election Commission steadfastly stonewalled all efforts to get the source code of the EVMs, and instead kept on reassuring everyone that they were safe, is itself suspicious.

Why weren't EVMs hacked in 2014 or later? That might be the question uppermost in your mind. Well, enough noise was made by various people including Subramanian Swamy that the courts started taking an active interest in them, and beginning to demand Voter Verified Paper Audit Trails (VVPAT), which have printed receipts.

Besides, after the loot of 10 long years from 2004 to 2014, the writing on the wall was evident even to the Congress, and it would have taken too many EVMs being hacked -- thus increasing the likelihood of someone spilling the beans -- to do the trick again.

How many EVMs do you need to hack, anyway? Or do you need to hack any at all? There was a startling, and never explained observation by Monu Nalapat. He apparently found on the EC website the final results in some constituencies before counting began. That could mean that instead of counting the votes from the individual EVMs and tallying them on a server, the opposite was happening: The server was fed pre-determined data, and it wasn't actually collecting anything from the individual EVMs. That would be diabolically clever, but it simply wouldn't work if there were printed receipts.

In any case, there would have been no need to hack every EVM, just a few in well-chosen constituencies, maybe as few as 1% of the total. Thus, only a few key conspirators needed to be in on the scam.

An experiment shows that you can follow a simple rule -- illegally divert every third vote to your candidate of choice -- and lo, your candidate, who would have failed in reality, wins by a modest margin: And the entire scam is undetectable. And the Trojan Horse malware can be programmed to self-destruct after use.

Besides, you can do this remotely by triggering the Trojan Horse with your cellphone: Most of this was demonstrated by an Election Commission EVM acquired by stealth.

And who had the means, and the motive, to do all this hanky-panky? Of course, it's the Congress, aided and abetted by good old #DeepState. It seems plausible they stole the elections in both 2004 and 2009.

The #DeepState has long arms and great reach. It is possible that it colluded with the Congress to steal the elections in 2004 and 2009, and thus put India at least 10 years behind in its quest to become a globally important power while the UPA looted it wholesale.